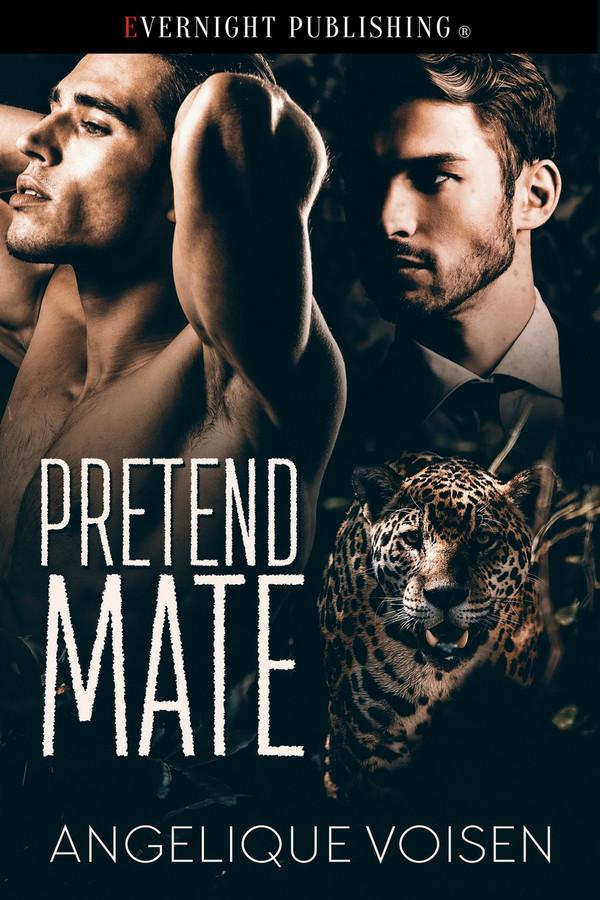 Broke and on the run from a vicious murderer, Dario Jacobs signs up with a mysterious match-matching organization out of desperation. Enigmatic self-made billionaire werejaguar Von Prince needs someone to play his pretend mate. Dario and Von are an unlikely match, and yet Dario finds himself instantly attracted to the dangerous and dominating shifter.

Von never thought he’d find his mate through an agency but now that Dario’s within his grasp, he doesn’t want to let him go. Even if his human is hiding secrets from him, Von’s determined to unearth all of the skeletons in Dario’s closet and slay all of Dario’s demons. Von’s willing to break all the rules because in the end, Dario will be his to claim.

“This is really happening?” he asked more to himself than Von.

“Scoot up a little,” Von ordered, and he did as the shifter asked.

Dario never thought he’d be the kind of guy who took orders from anyone when it came to the bedroom. However, Von’s commanding presence made him want to yield, to submit. He knew Von would be able to take him to dark places, places he’d only dreamed of when he masturbated in his own bed. Von climbed on top of him and took his mouth again. His mind emptied, and he moaned, sinking fingers into Von’s hair as Von laid kisses down the side of his neck.

He could feel his dick hardening to full length and Von’s thick, engorged shaft, pressing up against his belly.

From the research he did on the web, he thought shifters lacked patience when it came to intimacy, but Von proved him wrong on their first night. Von kissed, licked, and nibbled. Reaching his left nipple, Von took it to his mouth and sucked on it, making him groan. Von left tiny bites down the line of his body, like the shifter wanted to keep screaming at the world “mine”. Dario shuddered in anticipation.

He was used to being the second best or last choice his entire life—when it came to romance and work. This time though, Von put him in first place. It felt nice. Von’s touches were possessive and addictive, a deadly combination. Dario could get used to this, to this big, dangerous cat lavishing all his attentions on him.

What if he gets bored? said the uncertain voice inside him, but he shut that up. Von curled his fingers over his shaft and began tugging and pulling at it. He let out a breath.

“If you keep doing that, I’ll explode,” he said.

“Don’t. If you do, you’ll have to accept any punishment I’ll deem suitable.”

“God, Von. That will only make me climax sooner.”

Von grinned evilly and pulled his hand away. He glared at the shifter, who seemed far too amused for his comfort.

“What if I place a kiss here?” Von asked.

Without warning, Von leaned in close to blow at his lengthening dick.

Pretend Mate by author Angelique Voisen is fast paced romance with lots of love inside of it. Daris took a job as an escort. He needs protection from his brother’s killer. He is human and a really good person. I liked him. He wants more than a contract with his new employer Von. Von has been banished from his clan. He knows pain and suffering. He is a were jaguar. He knows Daris is hiding something from him he just doesn’t know what. He also knows Daris is his mate and he will do whatever he can to protect what is his. I loved this fast paced story and the characters have a great connection. I recommend this one to anyone who loves falling in love.

Dario had decided to leave town in a big hurry when the local werewolf mob boss killed Dario’s older brother, Dennis. Having signed up for Perfect Match while drunk one night, Dario had previously been ducking the return calls insisting they’d found Dario his “perfect mate”. Dario was leery – presuming the company wanted to set him up with some rich shifter who wanted a human mate and preferred to pay for the privilege. Dario didn’t really believe any of this mate stuff – but he took having his brother murdered and his own neck on the line next very seriously. So Dario went to pretend for a while with Von Prince. Only it quickly becomes clear not much about their chemistry is pretend, and the trouble Dario was running from was more than capable of hunting him down and following him. I found this to be an interesting and intense short story. While I wasn’t too much of a fan of the whole “insta-lust” feelings between Von and Dario, it’s hard to fault the author when really there wasn’t a whole lot of time for the two men to fall slowly in love and ease themselves into it. While I found their chemistry and sex super hot, it bugged me a little that Dario changed his mind very quickly from wanting to use Von’s penthouse as a safety net and hide-out – and keep his “relationship” with Von platonic and fake – and into pretty much forgetting everything except the desire and hunger he felt for Von. Dario had some legitimate, enormous problems on his plate – the death of his brother and having a shifter mob-boss out for his blood – and so mentally ditching all that and wanting to have endless sex with Von just felt like a little too big of a leap for me to follow in the span of a few pages. I was really pleased though that the conflict with the mob-boss wasn’t left lagging – or shelved completely – and feel the author did a very good job juggling the threads of Von’s desire, the growing real relationship between Von and Dario and the danger from the villain. It helped give the book the feel to me of having multiple facets and not just being too heavily weighted towards the erotic shenanigans between Dario and Von. I also really enjoyed Von’s friend-cum-bodyguard, Marco, and would happily read a story about him if one appears in the future With plenty of steamy sex and a tiny hint of rags-to-riches Cinderella fantasy thrown in, overall I found this to be an interesting and good read.