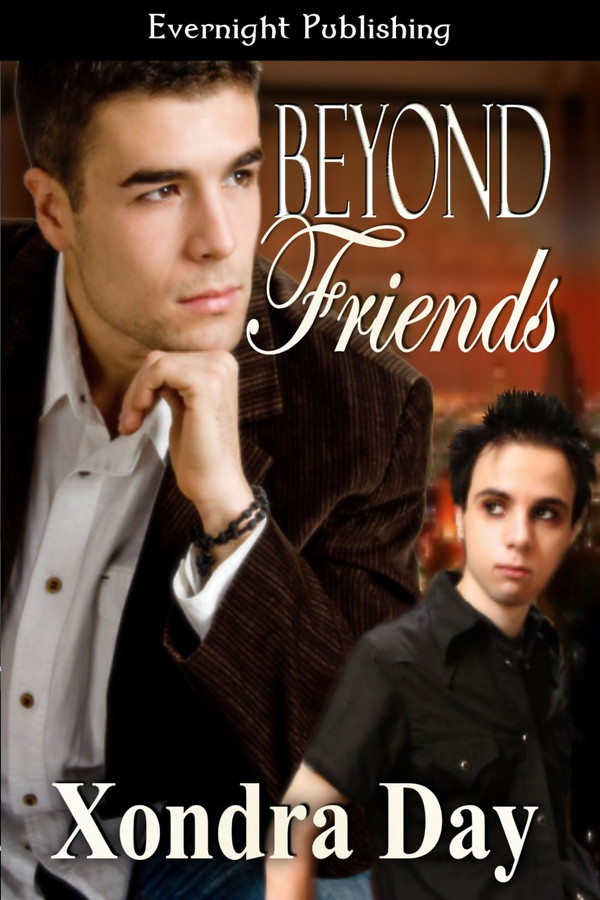 Long time friends and one time lovers, Jack and Rain, are now at a crisis in their relationship.  Polar opposites, each harbour romantic feelings for the other, but are afraid to own up to them.

When a tragic event happens in Rain's life, he looks to Jack to help him pick up the pieces, realizing there has only ever been one man in his life that he has truly loved-Jack.  But will Jack return his love? Can they ever be more than just friends?

“How come we never …?” asked Rain.
“Never what?” questioned Jack, playing dumb.
“You know…” Rain rested one hand against Jack’s chest, toying with the fabric of his t-shirt.
“We’re friends, I guess. Friendship is important.” This was true, but he couldn’t deny he’d thought about Rain many times in various situations that were much more than friendly.
“I do value our friendship,” said Rain. “Still, I can’t help but wonder what it might be like if we, you know, played around a bit. I like you in that way Jack. And I think you feel the same. I saw how you looked at me tonight. It’s ok if you want to touch me. I want you to touch me.”
Rain slipped one hand under Jack ’s t-shirt, his fingers dancing lightly across the guy’s stomach, moving lower. Jack bit his bottom lip, stifling a moan.
“You like that,” whispered Rain, his hand breaching the snug, elastic waistband of the boxers.
Jack moaned. He did like it, and there was no use in denying it.
“These need to come off,” murmured Rain. Jack raised his hips allowing him access.
His mind told him they shouldn’t, but his heart and his cock spoke louder.
“You’re so fucking gorgeous. From the first moment I saw you at the bookstore, the first time I came in, I thought that, and I still do.
“I’ve imagined many times getting between your legs like this and grabbing your cock, taking you deep in my mouth. And what about you, Jack? Have you ever thought about me like that?”
Jack tossed his head back against the pillows, looking up at the ceiling. Rain now had him in his tight grip, stroking him hard, up and down, tugging on his foreskin.  “Yes. Yes I have.” He let out a deep groan feeling Rain’s tongue slide up and down his throbbing shaft.
“Details,” demanded Rain. “I want details, Jack. Talk dirty to me.”
“I,” stammered Jack. “I want you to suck my cock. I want to shoot down your throat while you look up at me—fuck!”
The image burned in his head. As he scooted up to look down at Rain, he was taken aback to finally see it playing out.
“You taste yummy.” Rain looked up at him, his green eyes wide with desire and lust. “Keep watching me, babe. This is the best cock-sucking you’ll ever experience.”
The newfound confidence Rain was exhibiting was a total eye-opener. Never had Jack seen him like this.
Jack watched his cock slide deep into Rain ’s mouth, lips stretching, his piercing eyes watching Jack with every slick movement.
“Sexy fucking stud,” exclaimed Rain, withdrawing Jack’s dick from his hot, glistening mouth. “I love your big cock. You taste so fucking good, man.”
The bed clothes slid to the floor, exposing Rain ’s lithe, clothed body. Jack grinned. The guy looked cute all bundled up in his oversized stuff. “Mmmm, lemme see you naked.”
Rain slipped to the end of the bed and stood. He hauled the t-shirt over his head, tossing it aside. A huge wicked grin crossed his lips.  “You like?” he asked, one hand sliding across his chest.
“Very much so.” Jack nodded.
Slowly, Rain lowered both hands to the waist of his sleep pants. He edged the waist lower until Jack could see the slightest hint of light, brown fuzz dancing below his navel.
Hot, hot, hot!
“You’re teasing.” Jack inflected a serious tone into his voice.
“Me a tease? Never.” Rain lowered the waist a little more until his cock sprang free. Climbing back onto the bed, he covered Jack’s naked body with his until there was nothing separating them but hot, horny flesh.
They gazed into each other ’s eyes. Their lips connected, tongues melded together. The friction between them increased as Rain forced Jack’s legs further apart until they were rutting against each other.
“If you keep doing that, I’m going to come,” murmured Jack.
“Then come, I want you to come. We have all night.”
“You ’re evil.”
Rain licked his lips.  “I can still taste you.”
“I never once thought this would happen.”
“Then you can think again,” laughed Rain, grinding his hips into Jack. “On second thought, don’t come yet. I want you in my mouth again, I want to drink you, swallow you, taste your hot load.”
And that ’s how the night ended. Rain was true to his word. He did provide Jack with the best blow-job he’d ever received. Well, it was the only one he’d ever had. But Jack kept that information to himself.
They woke the next day intertwined in each other’s arms. Jack was late for work, but Rain had the day off. The odd thing was, Rain pretended like nothing had happened between them, which left Jack in a total state of confusion.

Review: Beyond Friends is a quick read by author Xondra Day. This author is new to me and while I liked the blurb I am always a little anxious about reading someone new. This story settled any fears about Ms. Day I might have had. Beyond Friends, the story of two young men who almost loose the chance to become something other than friends, was wonderfully written. The characters are complete opposites, yet, in some ways a lot alike. Jack is in his early 20‘s, runs a bookstore almost single handedly, and has no personal life to think of. Rain is in his late teens, works a boring job and wants the one thing he can’t have – Jack. Both want love, yet are afraid to reach for it. The emotions the men go through while coming to terms with their feelings for each other are wonderfully showcased. The story comes across believably as it is easy to understand why Jack and Rain behave the way they did. Although Rain has to go through a traumatic experience before these two come together, I love the way the author brought them together and wrapped up the story. Beyond Friends felt like just a beginning and I would love to see these two again. I will be interested to see what Ms. Day has planned next. Reviewed By: Lydia http://top2bottomreviews.wordpress.com/2011/05/11/beyond-friends-by-xondra-day/

Sweet, sad, but joyous in the end is the story of Jack and Rain in Beyond Friends by Xondra Day. Jack and Rain are friends who want more but both are afraid say anything. One intimate night leads to confusion for Jack and misunderstanding for Rain. A night out at a club sends Rain reeling when Jack goes home with someone else. Rain tries to move past his feelings and walks into a dangerous situation. Hurt, physically and emotionally, it takes an almost tragedy for them to admit to their feelings. Jack and Rain are a great couple. A short story but full of emotion, Beyond Friends will leave you with a smile on your face.

The beginning was a bit choppy but very quickly the characters came together and created a wonderful connection.I found this to be a romantic, steamy read with really likable characters. If you like M/M I&#039;d recommend giving Xondra Day a try!

From start to finish, I loved this story. This is a realistic M/M romance, rather than the all-too-common &#039;hormonal men&#039; type you see far too much of lately. Great characters, great writing. Buy, read, love. :)

I liked the connection that was shown between the two main characters in this short novella. The concept of friends becoming lovers has intrigued me, and I thought it was nicely developed in this story. Rain isn&#039;t the most likeable character. At times he&#039;s an ass and tends to make huge mistakes throughout his young life. Jack is the good guy, the one who is always there to pick Rain up when he has fallen. I&#039;m not one to give spoilers and you can read the blurb to get a bit about the storyline. I thought it was well written and for fans of romance, it&#039;s definitely there. A

Loving being his own boss, but working non-stop is just about killing Jack Warner. He has no life beyond the book store, and his only real friend stirs desires in him he is afraid to act on. His job at the salon is crap, but it has one very important thing going for it, it is close to The Bookworm. Every day Rain Underwood gets to look out, and ogle his best friend, and wish for the millionth time it could be more. With little or no time for a social life, Jack’s experiences are extremely lacking, so making the first move is never going to happen. He has feelings for Rain, but their friendship means too much for him to mess it up. Rain has played the field plenty of times, and paid the price for more than one bad decision, but Jack has always had his back. Everything always comes back to Jack, and Rain will have to decide if he is man enough to put it all on the line. Jack and Rain are so young and vulnerable at this point in their lives, and it is heartening to see how much they respect their friendship. It is also scary to imagine someone as young as Rain putting himself into such dangerous positions, but Jack is there for him every time, and never judges. Their relationship goes far beyond the physical, and I would love to see that explored more fully. They are on the cusp of a wonderful love affair, and it makes you smile to have read their story.