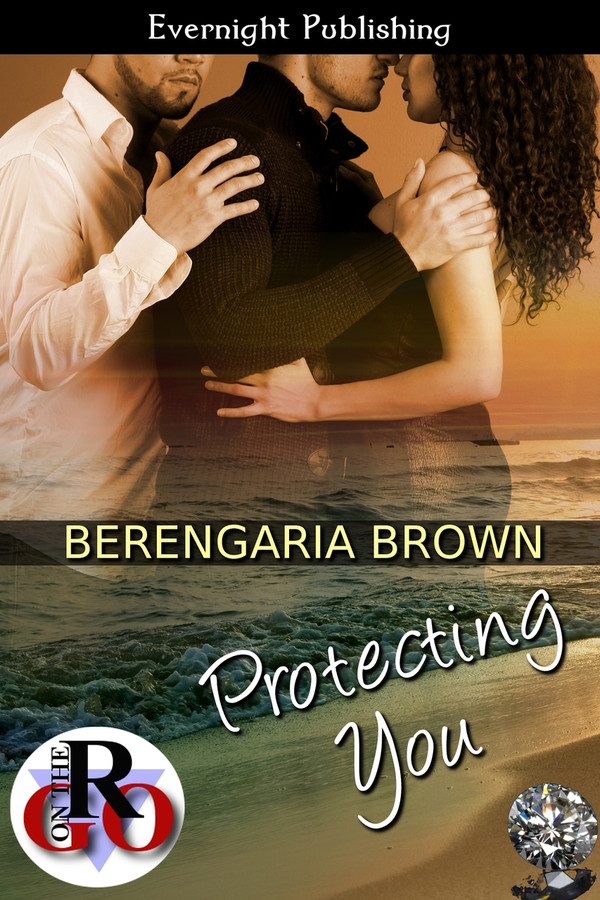 AJ has psychic abilities and knows Drew is her soul mate. But bisexual Drew flits from partner to partner. At the moment he’s with Kristien, and Kristien is very much in love with Drew. AJ can’t bear the thought that the only way for her to achieve happiness is to break Kristien’s heart.

She invites them both to join her and her friends at the beach for a few days, hoping to get closer to Drew. A rocky wall calls to her, and when she climbs up, she explores a cave and is led to three stones—an onyx, an emerald, and amber.

What do they mean?

“But you’re gay,” AJ said, choosing to ignore the bit about her needing protection.

“Have you ever watched two men kiss?” asked Kristien.

“Oh yes. It’s one of the hottest things I’ve ever seen.”

“Exactly. Since you’ve found the stones and we’ve found you, I think we should seal our relationship right here, right now,” said Drew.

“Why not? Like a Boy Scout, I’m always prepared,” said Drew, pulling a couple of condoms out of the zipped pocket of his board shorts.

Kristien walked to the other side of the cave. “There’s a nice clean patch of sand here. Since you’re going to be on the bottom of the pile, AJ, you’d better let us put our swimwear down first. At least we can keep the sand out of your hair and girly bits.”

AJ stood there with her brain working at warp speed. The two of them. Drew and Kristien. Kristien was willing to share Drew with her. Kristien wanted to watch her make love with Drew. What about her? Would she be happy watching Kristien and Drew making love? She remembered the time she’d seen them kiss. Hell yes! That was scorching hot. How much hotter would it be to see them naked?

The two men laid their board shorts on the sand and then each rolled a condom over their cock. Next, Kristien took a tiny tube of lube and spread that over his condom. For a moment she wondered if he had a hairbrush or flashlight in his pocket as well and almost giggled before focusing on the two naked bodies in front of her.

Kristien’s body was long and lean, with soft brown hair across his chest and in a trail down to a very impressive cock.

Drew was darker, his hair color between Kristien’s and hers, his body stockier, stronger-looking, and with muscles in all the places a woman liked to see them. His cock looked very ready for action. And suddenly AJ was too, cream dripping from her core onto her bikini bottoms as she understood that finally, finally, she was going to make love to her true soul mate—well, both of them. And wasn’t that a difficult idea to get her head around. Two men. She and Kristien sharing Drew. So did that make Kristien her soul mate too? Or were they just joint soul mates of Drew? AJ gave up on the thinking to concentrate on watching the men.

Very gently, Kristien turned her to face himself so Drew could undo her bikini top. As the scrap of fabric dropped to the ground, Drew lowered her onto the board shorts, slid on top of her, and put one arm under her head to cradle her neck.

Drew kissed her lips gently and said, “We’ve been waiting a long time for this. Once we three join together, your powers will get stronger, and we’ll both be needed to protect you. Emeralds are the protection stone. That’s why travelers used to always carry one. But they also enhance psychic powers. It’s going to be exciting to share in that development with you.”

As he spoke, Drew slid inside her, stretching her, filling her, completing her. It felt so very, very good, the culmination of something she’d wanted for so long. Yet she realized it wasn’t enough. Until Kristien entered Drew, the three of them wouldn’t be fully united, wouldn’t be truly one.

The idea that they were a triad was starting to make sense to her. She still didn’t want to think about her psychic abilities causing problems, but her grandmother had coped with it, so AJ assumed she’d be able to deal with it too.

This was an interesting story with these three characters. I liked the psychic aspect and makes the story more intriguing. I would have liked a little more interaction between AJ and Kristien.