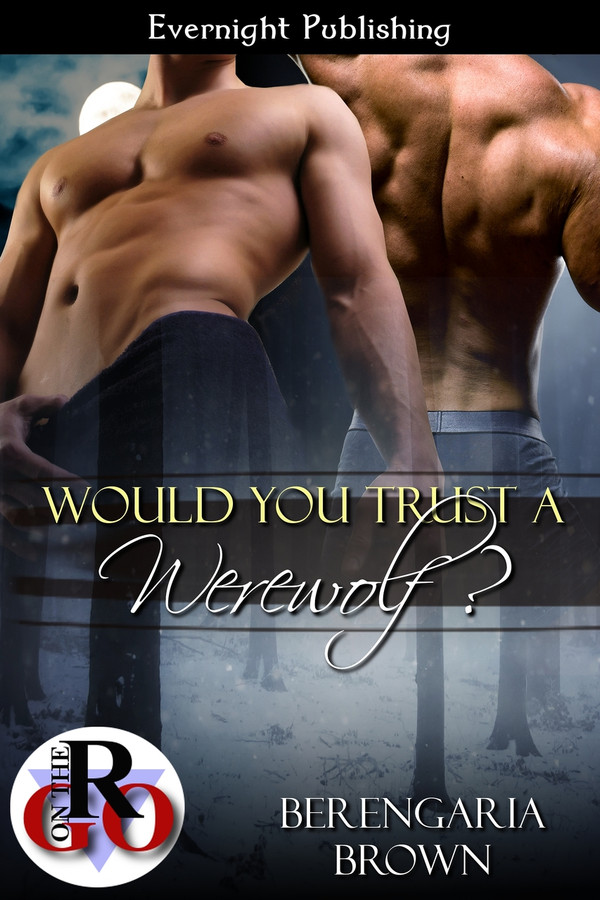 Cord has been attracted to Dillon for a long time. After months of casual conversation and a gradually growing friendship, he finally convinces Dillon to share a meal with him. But there's a problem—Cord is a werewolf and Dillon despises weres.

Their first date is a success, but how can they have a future without trust?

You need your fucking head read. Going off to fuck a werewolf. Where’s your brain? Dillon chastised himself as he followed Cord’s truck to Cord’s home. Oh yeah, that’s right, it’s in your pants. Well you deserve everything that happens to you then.

Yeah, but all that’s going to happen, is that I’m going to get laid. And it’ll be excellent, I know, because Cord’s so yummy.

Quite likely. But I’ll be a contented, satiated idiot.

Having lost the argument with himself on the drive there, and being unaccountably happy and excited at the thought of spending the night with Cord, Dillon jumped out of his car, beeped the security system on, and bounced across the parking lot to where Cord was standing waiting for him.

Oh my, the man did look yummy. Hunkalicious. Dillon was tempted to lick his lips but managed to refrain. He didn’t dare look down to check, but he was almost certain his dick was leading the way to Cord. To bed. Oh yes!

Cord kicked the apartment door shut and pressed Dillon to the wall. Dillon stared into Cord’s gaze. Their faces were almost on a level. Cord was just the slightest bit taller than him. His breath hitched at what he saw in Cord’s gaze. Lust. Desire. Passion. “Kiss me,” he breathed.

“I plan to do a whole lot more than kissing,” said Cord, holding Dillon’s chin in one hand.

Dillon licked his lips. He couldn’t help himself this time. Then he leaned forward and very deliberately rubbed his cock over Cord’s.

Cord hissed, then leaned his full bodyweight against Dillon, pressing Dillon hard against the wall. When Cord was plastered tight against Dillon’s body covering him from hips to shoulders, Cord flicked his tongue across Dillon’s nose, eyelids, forehead and jawline, as if savoring the flavor.

Dillon reached up and grabbed Cord’s head, sliding his hands through the thick, silky hair, then holding tight. “I thought you said you were going to kiss me. That’s not a kiss.”

“This is though,” said Cord in a half-strangled, husky tone, before plunging his tongue into Dillon’s mouth.

Cord’s tongue was everywhere, tangling with his tongue, rubbing along the insides of his cheeks, sliding over the roof of his mouth. Dillon tightened his grip on Cord’s head, holding it still so he could thrust his own tongue back in return, matching Cord thrust for thrust, stroke for stroke, until they were both breathless and gasping for air.

“Now that was a kiss,” gasped Dillon, grinning.

“Bedroom,” said Cord. “I don’t want our first time to be against a wall.”

I read this book before through Apple iTunes Books it was a great read. It&#039;s a short story but fun. the characterization is there and world building too. there are no spelling or typing errors and the author does a great job telling the story.

Protecting You by Berengaria Brown