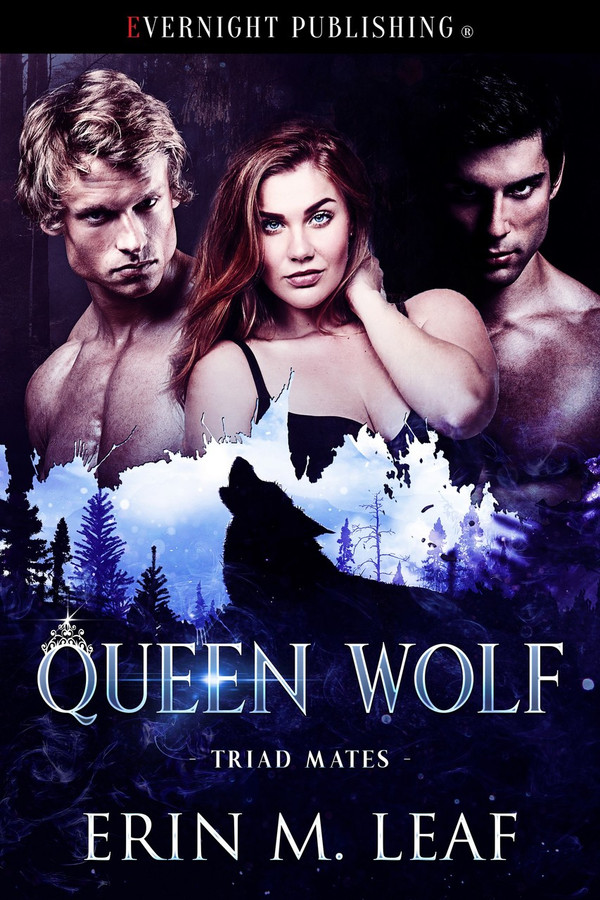 Avery is resigned to solitude. She can’t shift, she’s overweight, and her ex cheated on her, but when Alpha Fletcher and his best friend, Mitch, return to Boulder Pack after years of traveling, she’s shocked at how much she wants them.

Fletcher doesn’t expect to meet his mate within moments of coming home, but he and Mitch are nothing if not adaptable. Avery makes their beasts howl with need, but can she accept two wolves instead of one? Triad mates haven’t been allowed in ages.

Mitch is happy to bond with Avery and Fletcher—he has room in his heart for two mates. What he isn’t happy with is Avery’s father threatening her, and making her doubt her worth. Avery is a Queen, but she has no idea what that means. Will instinct be enough to push them together, or will Mitch and Fletcher need more drastic measures to convince Avery that she’s their destiny?

Mitch stopped just behind Fletcher. He stared for a moment at the woman backlit by the window. He could tell she was curvy. He could tell she had serious muscles under the curves. And he could tell she had grey eyes, because they were practically glowing as she looked at him and Fletcher, but he could not, for the life of him, figure out what the hell his wolf thought he was doing. The beast howled like the full moon was about to fall in on them, and his fucking heart felt that way, too. When he realized that Fletcher wasn’t able to move, he reached back and shut the door. He didn’t give a shit if this was the Alpha’s suite. Right now, he didn’t want an audience for the arousal that rocketed through him.

“Nine years is a hell of a long time,” Fletcher said.

Mitch didn’t know how he got his voice to work. He inhaled, and the scent of her—floral and musk combined—drove all rational thought out of his head. He growled under his breath as his cock shoved hard against the placket of his jeans.

Fletcher twitched, and Mitch clamped his mouth shut. He didn’t trust himself to speak right now.

Fletcher reached out his arm, pushing against Mitch’s chest as if to ground him. Mitch exhaled, sensing Fletcher’s Alpha power slide into him like a warm, familiar hand. A bit of his normal calm returned, thank fuck. “Avery,” he said, voice so low he barely recognized himself.

Avery turned her brilliant light eyes on him, and he almost stepped back when he saw the power floating in her gaze. She’s a Queen, he thought, shocked, and then, She’s our Queen. He reached up and gripped Fletcher’s wrist, pressing his fingertips into his best friend’s bones.

Fletcher didn’t even flinch. He glanced at Mitch, and the knowledge in his expression told him that they were on the same page.

“Mitch,” Avery replied. Her gaze shifted back to Fletcher. “And Fletcher.” She licked her lips, and Mitch felt the rumble of Fletcher’s growl on his skin. “Welcome home. It’s been a very long time.”

Fletcher dropped his arm and strode forward. Avery stepped back, but there was nowhere for her to go. Her back was at the window. Mitch followed his Alpha and stopped just as Fletcher sank his hands into Avery’s long, red hair. She gasped, eyes flashing silver, and Mitch felt her desire like a punch in the gut. She was just as aroused as they were.

“You’re all grown up,” Fletcher said to Avery. He jerked his head, short and sharp, and Mitch knew Fletcher wanted him to move in on Avery’s other side. He did as Fletcher asked, not needing words, and put his hand on Avery’s shoulder. Her skin was so hot it burned his palm, but his wolf liked it. The creature snarled, and Mitch sucked in a hard breath, fighting to keep himself from just grabbing her and throwing her down on the floor where they could fuck her easier.

Dear God, help me, he thought, half shocked by his thoughts, but also grateful. He hadn’t been able to have sex in over a year, and this woman obviously had something that both he and Fletcher needed. He didn’t mind sharing. Hell, he wanted to share with Fletcher. He needed it. He could already feel the tenuous thread that tied them together strengthening. This woman is a catalyst, he realized, but he had no idea how or why her, instead of any of the other women he and Fletcher had tried to hook up with.

Avery blinked, but astonishingly, didn’t try to get away from Fletcher’s grip. “Yes. I’m twenty-five now.”

“Thank God,” Fletcher said, and then he dipped his head and kissed her.

Avery froze, stunned when Fletcher just leaned down and kissed her, as if it were perfectly normal to kiss a woman you’d just met again after nearly a decade apart. She hadn’t minded the hands in her hair, or Mitch’s hand on her shoulder, because the touch soothed her wolf in some unfathomable fashion, and she wasn’t about to complain when the prickles in her skin calmed down. However, the kiss was another thing altogether. She lifted her hands, about to push him away, and then his tongue slipped into her mouth and all rational thought fled her skull.

Oh my God, he tastes like the wind, she thought absurdly, and then Mitch pressed up against her side, and she turned her head, gasping. Before she could take a breath, he kissed her, too. He tasted like a storm, all roiling clouds and lightning, and she realized that the two men tasted the same. She wrenched her head back and stared at them in shock. “Oh my God. What’s happening?” She had never felt this way with Brian. Or anyone, for that matter.

“I have no fucking idea,” Fletcher said, staring with those golden eyes as if he could see into her soul.

Avery reached up and tugged her hair away from his fists, then moved so that Mitch’s hand fell away. Her wolf immediately howled again, and she flinched, feeling behind her for the window. She knew there was a small balcony of some sort just below this suite, and she knew she could survive the jump down. But I’m not sure I can survive another second with the two of them, she thought, panicking. How could Paige have been so right about her wanting Fletcher? And Mitch? How could her wolf suddenly go crazy, pushing her to want things she shouldn’t? She wasn’t anyone important. She couldn’t even shift. She wouldn’t bring anything helpful to the pack. Heirs usually married the daughters of Alphas, or Betas, and quite often, the pairings were politically motivated. She was nobody. I have to go, she thought, as fear speared through her arousal.

“I’m sorry,” she murmured, and then she let herself twist backwards and down, rolling onto her feet as she landed. She risked a quick glance up—Fletcher and Mitch stared down at her—and then she pushed off and ran away.

First off: Fated mates are myth. Secondly: Avery Tate is NOT an alpha. She can’t even get her wolf to behave. Third and most important: She has NOT been pining away for best friends Mitch and Fletcher to return from their walkabout. And Lastly: the Earth is flat. Yeah, all of these statements are flat out lies. Avery Tate is a little bit stubborn. Actually, she’s a lot stubborn but her world is about to get turned upside down and being stubborn isn’t going to work much longer. The world changers go by the names of Mitch and Fletch and they have some very specific plans in mind just as soon as they get a few minutes alone with Avery. I’ll just say, it was explosive and so much fun!! The author does a fantastic job of building the tension before the characters even meet up face to face. It’s not that they don’t know each other, they grew up in the same pack, but they haven’t seen each other in quite a few years. Time and maturity changes people. I loved how the author quickly dispels the ‘fated mates are a myth’ theory by simply having them recognize each others scents on the wind. So the natural thing to do after meeting ones mythical fated mates is of course to run. Avery didn’t make it easy on these boys. It’s a good story. Fated mate stories have been done but this one still felt fresh. Mitch and Fletcher are the right amount of hot and sexy without being over the top. Avery’s been left to her own devices in the pack for nine years and these wolves are just what she needs after dating so many dogs. The latest being the worst. The book is just about the triad getting together. There’s plenty of excitement outside the bedroom and a plethora of baddies conspiring to keep them apart. I stayed glued to the pages to see how it all worked out. I was excited to see that this was the first in a new series and can’t wait to return to the Boulder Pack to see if Paige meets her match (or matches) in the next book.

QUEEN WOLF is the first book in the Triad Mates series, and we start off with a boom! Quite specifically, the boom that follows something being set alight. Avery has decided to burn her ex&#039;s old porn magazines, and takes great delight in doing so. Although part of a pack, Avery doesn&#039;t feel like she belongs, for a number of reasons. However, times are a-changing for the pack, and that has a major impact on Avery and her life too. I love Erin M. Leaf&#039;s books, and always look forward to reading them. This book was no different. We have wolves, we have a triad, and we have sneaky stuff going on that is causing trouble for them all. What could be better? First books in a new series can always be tricky. It&#039;s hard getting the world building just right without info-dumping on the poor reader. However, this is set in &#039;our&#039; world, which means the author has been able to concentrate on the pack and how it works, including the problems it now finds itself with. I loved the world building in this book, and that, coupled with strong characters and no editing or grammatical errors, means I thoroughly enjoyed this story and can&#039;t wait for the next book in the series. Absolutely recommended by me.

A MMF wolf shifter story with likable characters who have very good chemistry. I&#039;m definitely looking forward to the next in the series.

This author is new to me. I really enjoyed this book. Fletcher and Mitch and Paige were great together. Love,respect and hotness what more could you ask for. Can&#039;t wait for the next book. Some twist and turns. Would recommend this book.

The Blizzard by Erin M. Leaf