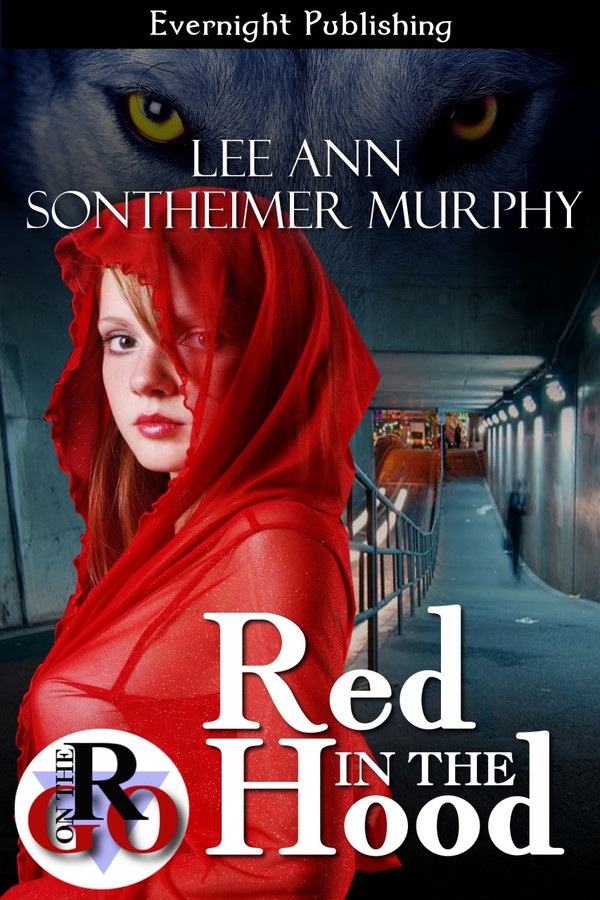 Tamara’s known far and wide as the girl in the red hood.  Red is not only her favorite color but a way to express everything from anger to love.  She hates her mundane existence. After tragedy destroyed her family life, Tamara’s become a loner who shuts out everyone, even her one-time lover, Wulfric.

Wulfric refuses to give up on Tamara, and when she yields to him, her life seems to shift back on track.  But when danger hits, Wulfric steps in to make the ultimate sacrifice to save her.   His life and their love hang in the balance.

It might take another half hour or even forty-five minutes, unless she cut through the cemetery.  At the end of the street, she jogged over to the dead end of it, to the entrance.  The tall, heavy gates were shut and locked but she’d climbed them before and she figured she still could.  If she remembered right, there might still be a section of fence where the bars gaped and she could squeeze through.  Tamara’d done it plenty during her teenage years and although she should have more decorum now, she didn’t.  All she wanted to do was reach home without incident, crawl into her bed and sleep.

She slipped through the gap and moved through the cemetery with the same silent grace as the shadows flitting through the place.  Tamara didn’t know if light refraction cast them or if they might be ghosts, but she didn’t care either.  Nor was she afraid.   She strolled through mausoleum row, a place she’d considered a neighborhood for the dead as a child.  As she reached the end of the line where she’d need to step off pavement and cut through rows of graves, she heard something scuffle behind and froze.   Although it might be some nocturnal animal, somehow she doubted it and recalled now the old cemetery drew a crowd of visitors, some far from nice.  She pulled her red hooded jacket closer and said with a bravado she didn’t feel, “Who’s there?”
As she waited for a reply, she scanned the dark rows of grave monuments but saw nothing and the silence began to bother her.   If someone jumped her, she’d do her best to fight but she wasn’t carrying anything she could defend herself with, not even a pocket knife.  She heard noise again, just behind her and whirled to see Wulfric approaching.
“You scared me,” she said, dropping her tough girl pose for a moment.  “Why did you follow me?”
He stared down at her, face sober. “I was worried about you.  You shouldn’t cut through here, Tamara.  A girl got raped here last weekend and a lot of drug deals go down here too.  Besides, there’s too many wannabe ghost hunters wandering around playing hoodoo games.”
“I’m not afraid,” Tamara lied.
“You were.”
He knew her too well and she resented it.  “No, I’m not.  Go away, go home or something. Don’t you have to work tomorrow?”
“Yeah, I do,” Wulfric said, “but I don’t sleep much anyway and I’m not going home until I make sure you get there safely.  If you want to waste time fighting about it, we can.”
His eyes stared into hers with such intent power she shuddered.  He meant what he said and although she didn’t want to admit it, Tamara liked it.   As she trembled he put his arm across her shoulders, casual and friendly.  “Okay,” she conceded. “I’ll let you this time, just because I’m too tired to argue.  But you need to let it go, Wulfric, and forget about me.  I’m not worth bothering with.”
He shrugged his shoulders. “I don’t agree with you but oh, well.  Let’s go.”
Wind, sharper than a well-honed blade, cut through her as they exited the cemetery.  November chill sent shivers through her and with a sigh Wulfric put his arm around her. “You’re freezing,” he said, accusation in his tone.
“Yeah,” she admitted.
“You’re going to get sick,” he fussed. “Let’s stop by my place so you can warm up.  It’s still a long way to your house.”
She shouldn’t and she knew it but Tamara shivered. “Oh, all right,” she said.
Wulfric lived in an upstairs apartment in an old two story frame house.  She’d walked by here many times but never been inside because back when they were still together, he lived in another place.  Tamara followed him up the narrow stairs and stood in the dark hallway as he unlocked the door.  Once inside the small living room, she sat down on the rump sprung couch, arms wrapped around her torso in an effort to get warm. Heat rippled outward from an old steam heat register and after a few moments, she felt its warmth.
“Do you want some coffee or something?” Wulfric asked, shedding his own jacket.
Tamara shook her head. “No but thanks. I don’t want to be any trouble or make a fuss.”
He laughed. “Uh-huh.  You’re always trouble, Tamara but I love you anyway.”
His words hit her hard.  Tamara savored them and yet they hurt.  To avoid any more pain, she did what she always did – prepared to run.  She stood up. “I guess I’d better go.  You don’t have to walk me there. I can find my way.”
With speed he stood up too. “I’m not letting you walk through this neighborhood at this time of night.”
Before she could protest or say anything Wulfric kissed her.  His mouth latched onto hers with familiarity and need.  Tamara responded, her lips crackling with sudden heat and her arms circled his neck.  Encouraged, Wulfric kissed her deeper and his arms tightened his embrace.  Her body erupted with a rush of desire and a sweet yearning so poignant she ached.  Vulnerable at the late hour Tamara yielded to him, her defenses down.
Beneath the red hoodie her heart beat a swift tattoo and her body heated as her secret places grew wet and wanting.  Wulfric’s hand crept up beneath her jacket and shirt to fumble her bra open.  With an old trick he’d perfected he pulled her bra out through her sleeve and his hands caressed her breasts.  He used his fingers to fondle her nipples into hardness, each one standing at full attention.   Tamara should complain, she should thrust him away and leave but she enjoyed what he did.  She’d craved his touch and delighted in every pleasure thrill shooting through her body.  Her flesh tingled with delight, and when Wulfric pulled off her red hood, then her blouse, she didn’t try to stop him.

An interesting story not at all what I expected this one kept me guessing!