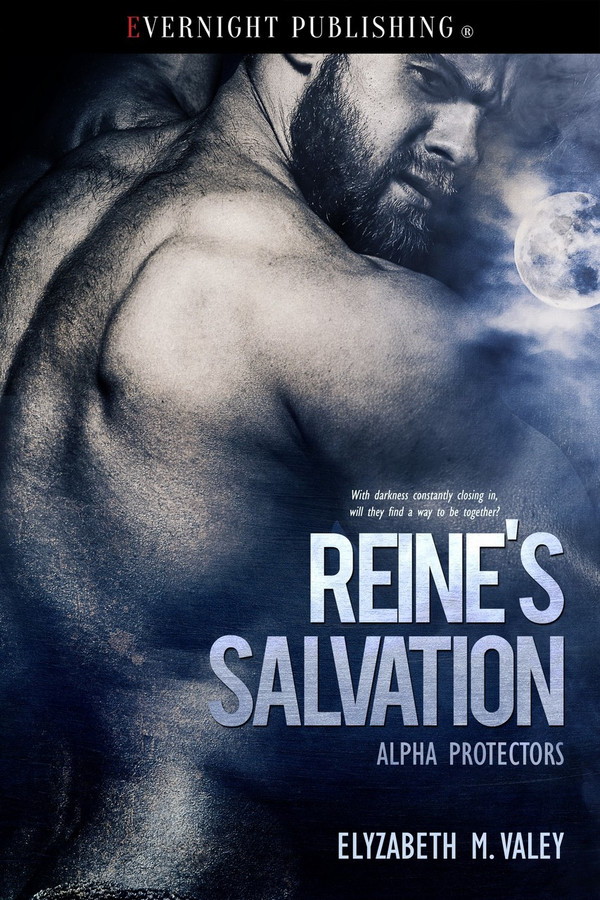 He’s the kind of man her mother warned her to steer clear from...

Mystique is happy with her current life, but for years she's struggled on a path of self-destruction. She knows she shouldn't get involved with the brooding hunk at the bar, but how can she stay away when his sorrowful gaze is so compelling?

Reine has lost everything: his wife, his friends, his ability to fight, and his identity as an Alpha Protector. There's nothing left for him except a world of anger and bitterness. At least, that’s what he believes until he meets an intrepid waitress.

The attraction between them is immediate, but while Reine can’t let go of his past, Mystique is not willing to return to hers. With darkness constantly closing in, will they find a way to be together? Or, will Reine's behavior destroy their future?

Reine sighed. “Can we talk about something else?”

“Sure,” she agreed. She observed him for an instant. His eyes were closed. Her gaze traveled across his nose and over to his full lips. Damn it if she didn’t want to kiss him. She lay back down, trying to still her beating heart. “What would you like to talk about?” she asked.

“How about this insane attraction we’re both feeling?”

Mystique shut her eyes as she heard the rustle of his clothes. She didn’t dare open them.

“I haven’t felt so attracted to any woman in over two years, and from what you’ve told me, it’s been a while for you too.”

Eight years, she thought. She’d kept herself away from one-night stands and sex with others in general, afraid she’d become angry and bitter again if things didn’t work out. She played with her toys and enjoyed her body on her own. It had been enough, until Reine. He was driving her hormones crazy.

“Damn it, woman, do you know what that does to me?”

Mystique gasped as Reine’s lips brushed against hers.

“It makes me want to devour your mouth,” he whispered.

“I’m sorry,” she said, sounding breathless to her own ears.

She opened her eyes and found his face inches away. The intensity of his gaze was like looking into a pool of flaming desire that threatened to consume her.

She didn’t have time to issue a protest as he lowered his head and kissed her. They both groaned as their lips melded against each other. His teeth snagged on her bottom lip, pulling slightly and making her body react like a fire alarm at the first hint of smoke. His tongue licked a path across her bottom and upper bow, and she eagerly opened up for him, needing to taste more. Her nipples hardened beneath her top.

Reine pulled her up into a sitting position and smashed his lips against hers. He possessed her mouth with his, not with strength, but with the ability of a man who knew what he was doing. His tongue delved deep, intertwining with hers. Mystique moaned. Her mind went blank, her senses taking priority over anything else. All she could do was feel the touch of his hand on her back, and the warmth of his mouth against hers.

Breathless, they both pulled back after a few minutes. Her hands trembling, she pushed a few strands of his hair away from his face. Reine kissed her gently. She angled her head and he explored her mouth at a more leisurely pace.

“You drive me insane,” he whispered. “This is not normal,” he insisted.

“I want to fuck you,” he groaned into her ear. He brought her hand to his cock. Eagerly, she stroked him over his jeans. Liquid rushed to coat her panties and a dull ache began to throb between her legs.

“And what are you waiting for?”

“What?” She placed a hand on his chest and pushed back. “What do you mean?”

Reine has lost everything. His family and his ability to fight and be a protector or he so thinks when he meets her in the bar. Mysique is special and when she meets the dark broody man life changes. As they explore the town of Lance together he finds himself and the real reason he’s on Earth. Reine is a Guardian and will always be a Guardian. So this was the first time I read this author. Its an interesting story line of Protector&#039;s of Earth saving humans from the bad guys, the Inferums. They come to Earth to steal souls. Reine has lost a limb and is depressed and wanting to die but gets a new look on life when he meets Mystique. Planned or not? Maybe. But they do make a great combo and this pulls Reine out of his depression and gives him a new purpose. This story is the king of dark but ends in a very happy ending. This book might not be for everyone but its an enjoyable read if you are looking for something new.

Reine is a broken man, losing his family, friends and status as alpha protector. Mystique knows he’s damaged and that being with him is a bad idea but how long can she resist him? Reine, poor Reine. He is so beaten and broken. I really wanted to read about him finally finding a happy place. Having the book from his point of view pulled me in quickly and refused to let go. Mystique is troubled as well, dealing with a hurtful past. I love how these two broken souls lean on each other. It really makes their romance believable. As much as I like the characters and romance, there isn’t much else to this book. There isn’t much action or world building. The sex is steaming hot though, so that’s a big plus. ​ If you’re looking for romance with a hint of paranormal, Reine’s Salvation is highly recommended!

Seriously sexy, heart-felt fun! I really enjoyed this novel and its two main characters and their scorching hot romance as well as the theme of the entire story. This was a great story about, well, salvation, finding reasons to go on when the entire world seems broken. And Reine is definitely busted in more ways than one, including a physical defect that had a truly gut-wrenching twist behind it. I loved the way both Reine and his unexpected love interest Mystique interacted. They both had tragic backstories and both seemed surprised to be leaning on each other. Not the mention the romance was steamy as hell. I mean, WOW. Very hot. The only reason I didn&#039;t give five stars was because there didn&#039;t seem to be a heavy supernatural element to it. Oh, it was there and the demons definitely carried a deep level of symbolism, but I would have liked a little more action and a bit more world-building. But that&#039;s personal opinion and a little nitpicking. All in all, I truly enjoyed this new work by VaLey and recommend it to anyone looking to add another fun, sexy book with developed characters and scorching hot romance to their shelves. You won&#039;t regret it!