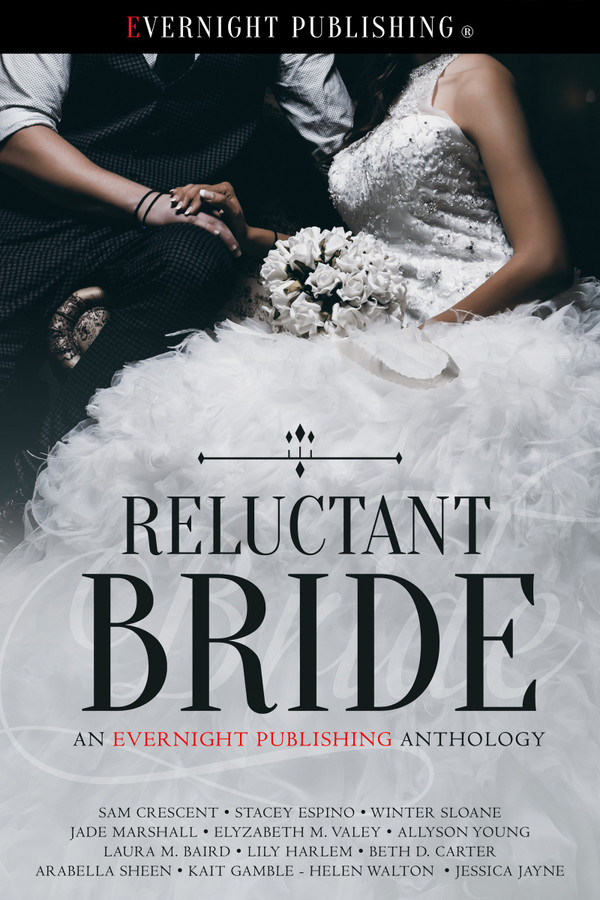 He’s older, wiser, and always gets what he wants. This wedding is happening ... whether the bride likes it or not.

Our twelve hand-picked stories feature young reluctant brides and the older men determined to claim them. These forced marriages may start out frigid, but our authors will prove that love can conquer all.

Evernight's Reluctant Bride anthology stories are sure to deliver passion that is off the charts, scorching hot sex, and sigh-worthy happy ever afters.

His Love Contract by Helen Walton

Marrying the Devil by Jade Marshall

Between a Rock and Mr. Big by Kait Gamble

The Reluctant Bride Anthology contains 12 stories by authors in the Evernight world. Each story is about a different couple with different story-lines. But they are all about an older man/younger woman where he is determined she will be his and she is more than a little &quot;reluctant&quot;. I have not read all of the stories yet, as it always takes me a bit of time to get through an entire anthology. But the stories that I have read I have enjoyed. They are nicely written, have good character development and fun, smexy and engaging story-lines.

I loved each story in this collection of &quot;Reluctant Brides&quot; but Sam Crescent and Stacey Espino&#039;s story was one of my favorites. I instantly was rooting for Violet and Henry. Especially knowing what her father was setting her up for! Now, on to the Reluctant Groom collection

This is a great box set anthology by a variety of authors. This review is for Crushed Violet by Sam Crescent and Stacey Espino. This story was amazing &amp; engaging! It grabbed you right from the start and never let go. Violet &amp; Henry were some of my favorite characters. Each time these ladies collaborate, it’s incredible. Definitely worth the read!

The Reluctant Bride Anthology contains 12 stories by authors in the Evernight world. Each story is about a different couple with different story-lines. But they are all about an older man/younger woman where he is determined she will be his and she is more than a little &quot;reluctant&quot;. I have not read all of the stories yet, as it always takes me a bit of time to get through an entire anthology. But the stories that I have read I have enjoyed. They are nicely written, have good character development and fun, smexy and engaging story-lines. I received a copy of this book and am leaving my honest review. My opinions are all my own

A collection of short stories with women who are reluctant to marry? Yes, please. The men are somehow going to woo them? Heck, yeah! Why does this sound familiar? Oh yeah, I needed to be convinced to marry my husband. Sometimes I wish I had been smarter... So my take on this anthology is probably not the average person&#039;s. My review is for the story by Lily Harlem, &quot;Highland Fling.&quot; This is a contemporary romance with an American girl in Scotland. Jasmine is basically blackmailed into marrying a hot Scot. I thoroughly enjoyed the set up for the wedding, and there is plenty of steamy goodness. I kind of wish that Jasmine had been smarter and got away. For a moment there, I was excited and happy to see her run. I amdisappointed that she didn&#039;t have a better plan. Then there&#039;s the happily ever after. I have to give it to Lily, she writes engaging characters. I wanted to save Jasmine! I know I&#039;m weird, but I could go for an alternate story collection with the reluctant brides being runaway brides.

His first wife was a disappointment and now he has a son to raise on his own, but when he sees the MC princess, he decides that he will make her his. He will have to wait for her to turn eighteen, but he may be able to speed things up to get her into his life. He is patient for something’s, but he will push the situation. She’s an MC princess and she has to marry a man she doesn’t even know to keep her life and for protection. Her father made a deal with the devil to protect her and she’s not happy about it. She will maintain her composure and she won’t give in to the overbearing, older man that wants her. This was a short story of an age gap marriage, with a man that manipulates things to go his way and makes sure that he will get what he wants. She may not want to marry him and has set up her own rules to the marriage, but her heart will betray her. She can’t help but lose her heart to the little boy that has become her stepson and the man that she’s now married to, he has to work his magic to get her to lose her heart to him. When danger finds its way into their home, Thalia will prove her love and protect her family. Nero’s past has come back, and danger is lurking in the shadows, he’s in danger of losing everything and it will destroy him if that happens. I enjoyed the quick read, its action packed and has a sassy, strong willed woman that finds her path in life with her sexy, older husband. I give this story a 4-star review.

Reluctant Bride is a sexy anthology filled with brides who are not always willing and the men who are determined to have them. It&#039;s filled with the push and pull of the relationship as these men and women navigate being together and finding their happy ever after. This is a fantastic collection with some incredible authors. My particular favorite is Lily Harlem&#039;s contribution with Highland Fling. Highland Fling by Lily Harlem (from the Reluctant Bride anthology) Highland Fling is a short, sexy romance with a reluctant bride and a man determined to make her his. Jasmine is running from her past and a terrible ex when she lands in the highlands of Scotland working at a beautiful hotel. She&#039;s kind, friendly, and hardworking, and hoping to make a life for herself away from the danger of her past. It takes a small indiscretion to put her in the sights of Stuart and things escalate from there. I have to say, I understand Jasmine&#039;s reluctance towards Stuart&#039;s proposal and Ms Harlem does a good job with the whole &quot;reluctant bride&quot; theme. Not my favorite trope since I tend to stay away from all things that smack of that reluctance, but Ms Harlem does a good job of working through Jasmine&#039;s resistance quickly. Can&#039;t say I was particularly fond of Jasmine when she decides to do something foolish but hey, it certainly added to the drama of the situation. Stuart is a very determined man. He&#039;s hard to get a read on at first since he comes off as very demanding and bossy, but as he slowly reveals himself, we find out that he&#039;s a man of integrity, who cares about his employees and the environment, and he&#039;s conscious of what he does and the legacy he&#039;s going to leave behind. Of course, that doesn&#039;t negate the fact that he&#039;s domineering as all heck and is very insistent where Jasmine is concerned. It takes a little while to discover that he&#039;s noticed Jasmine from the start and has wanted her the whole time. Things might have gone a little more smoothly if his methods were a little less abrupt and dominating.

Twelve stories about young reluctant brides and the older men determined to claim them. The authors promise that these forced marriages may start out frigid, but love can conquer all. Grab your copy and find out how the ladies can find their love in these matches. Titles include: 1. GAMBIT by Elyzabeth M. VaLey 2. HIS LOVE CONTRACT by Helen Walton 3. AMBIVALENCE by Jessica Jayne 4. LOVING OBSESSION by Allyson Young 5. MARRYING THE DEVIL by Jade Marshall 6. ARROGANT CEO by Laura M Baird 7. HIGHLAND FLING by Lily Harlem 8. CRUSHED VIOLET by Sam Crescent and Stacey Espino 9. HEARTLESS by Beth D. Carter 10. RELUCTANT LOVE by Arabella Sheen 11. ROMAN&#039;S PRIZE by Winter Sloane 12. BETWEEN A ROCK AND MR. BIG by Kait Gamble The stories are not just “run of the mill” swoony type story lines. For example, in “BETWEEN A ROCK AND MR. BIG”, Odette, daughter of a powerful man, is grabbed off the street by a gigantic man who intends to force her to come with him. Before he can, another man shoots him! The other man was a friend, or at least Odette thought that until he holds the gun on HER and puts zip ties on her wrists as he tries to put her in his car to take her to her younger brother she hasn’t seen in years! She still has no idea what is going on with these kidnapping attempts. But she had angled her wrists to keep the ties loose and was able to get out of them, take her “friend” by surprise, and knock him out. Hardly able to make another move, a man comes up behind her, chuckling that he did not have to be the White Knight who rescued her. He says he will explain but insists she follows him to his car! She recognized this man as another very powerful man who was her father’s biggest enemy. But he told her that her brother had killed their father and now was taking action against her since she was the oldest child and posed a threat to his takeover. Now Bruno Genovesi is there to save her… hopefully. He gives her a video of her father recorded for Bruno and for her. Her father begs Bruno to help Odette and rescue her from her brother. In return, he is giving his entire empire over to Bruno. Whether Odette wants his protection or not, she is now his responsibility and he will do right by her. He slipped a diamond ring on her finger. You can be sure she will not go quietly into a marriage where she thinks there is no love. Grab your copy and find out if he gets the chance to prove to her that she’s wrong… and what he must endure until she is convinced! (And I’m sure they are not done with her brother!)