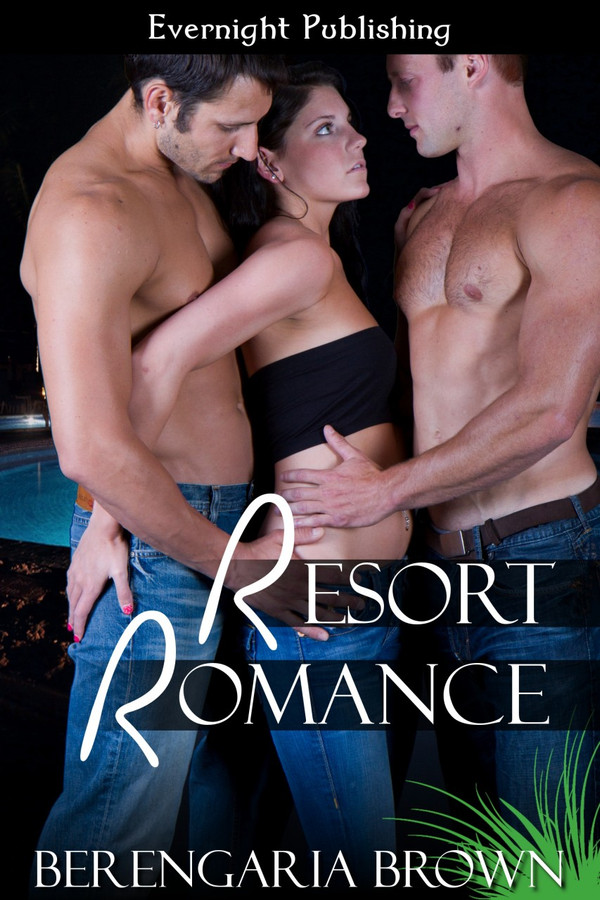 Imogen agrees to accompany Gage and Liam to a resort for a week long vacation and some extra hot ménage sex. The gardens are beautiful, the meals are delicious, and the facilities are excellent.

The men are awfully yummy and Imogen is having a wonderful time. But Imogen has to decide whether the best orgasms of her life are worth risking potential heartbreak.

Before Imogen could take another breath, the two men surrounded her. Two hot, hard bodies pressed against her—one in front and one behind. Four arms held her tightly and two sets of lips whispered across her skin, one on her cheeks and the other on her neck.

“Oh you will enjoy it. We can promise you the best orgasm you’ve ever had. When we’re both inside you, I can feel Liam’s cock and he can feel mine. The tissues separating us are very thin and very sensitive. You’ll feel our every twitch and pulse as we stroke deeper and deeper in you, bringing you closer and closer to the ultimate climax.”

Imogen shivered. Gage’s sexy voice was bringing her pretty close to an orgasm with every word he spoke, and cream was already dripping from her pussy onto her panties. Deep inside her core a throbbing drumbeat had begun to draw her ever nearer to the climax Gage promised.

Behind her, Liam kneeled and slipped her feet out of her sandals, then pressed hot lips to her legs, kissing his way up them to her knees. He licked all around her knee and then butterfly kissed the sensitive skin at the back of her knee.

Gage slid his hands under her T-shirt and trailed his fingers up, up, up, over her bellybutton, over her ribs, until finally they rested under her breasts.

“Touch them,” she begged him. But he ignored her and stroked his hands up and down her spine, rubbing circles and spirals across her back as he went.

Meanwhile Liam had swapped to her other leg and was licking and sucking the back of that knee now. I never knew knees were sexy, she thought as her brain started to fry from the combined heat of the men’s touches.

Liam pulled her thighs apart and she staggered as her legs almost refused to hold her upright any longer. He held her thighs firmly and began nibbling the oh-so-delicate skin of her inner thighs.

Gage finally slid his hands under her bra and rested his palms over her breasts. Imogen sighed with relief at the hot touch just exactly where she needed it most.

But her relief was short-lived as the coiling, fiery ball of need deep inside her was demanding more. Much more.

She became aware of a very large cock in easy reach of her hands, but her legs were so weak from all the emotions coiling through her body she wondered if she would fall over if she let go of Gage’s waist.

Taking a deep breath, Imogen popped the buttons of Gage’s pants and slid the zipper down. His tighty whities outlined his cock to perfection, and she almost drooled as she lifted it out of its wrapping and cupped it in her hands. The vein was throbbing and the head a dark red. As she ran her fingers up the long stalk of his erection, a tiny pearl of pre-cum gathered in the eye. Gently she smoothed her fingers over the head of his cock and rubbed the moisture into the cap.

Before she could lean forward and lick his cock, Gage pulled her T-shirt over her head and said, “I think it’s time to move this party to the bed.”