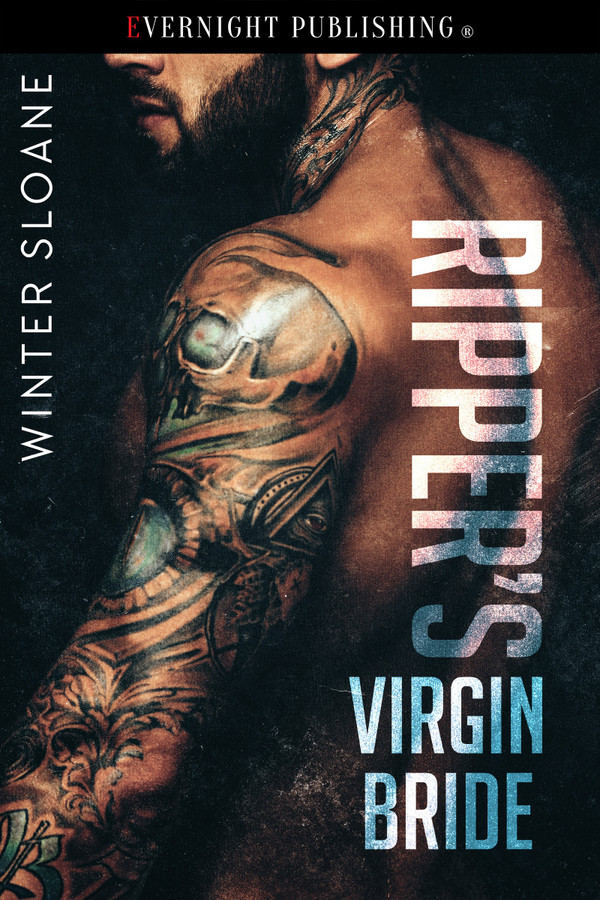 Ripper’s Vice-President of the Skull Crushers MC. He’s thought about quitting his violent lifestyle but something keeps holding him back. The thought of leaving the only woman he’s ever only wanted guts him. Lily’s too good for him, for this life, but Ripper can’t deny himself any longer. The more he waits, the worse his desire grows for his bestfriend’s daughter. Lily’s not just a fling. Ripper intends to claim her, own her, and make her his old lady.

Lily’s stuck in a bad place. She’s sick of cleaning after her drunk father, of pining after a man who only sees her as nothing more than his best friend’s girl. Lily’s out to prove she’s now a grown woman but can one night change everything?

“Go ahead. Come closer, fucker,” Ripper said in a deadly voice, only worsening the situation. When Marley stayed where he was, Ripper chuckled. “Thought so. You touch her or even come within two feet of her again, I’ll break all your fingers then I’ll move to your face.”

Lily knew Ripper wasn’t lying. Unlike Bear, Ripper stuck to his promises. Ripper slid a muscled arm over her shoulders and led her outside. Growing up, Lily had always been the chubby kid the boys in the playground picked on. Only after high school did she learn to love her curves, but with Ripper, she felt tiny. He simply towered over everyone else, like some kind of behemoth.

With Ripper holding her close to his chest, she almost felt like a different person. Like she belonged to him. Lily knew the illusion wouldn’t last. Soon enough, Ripper would drop her off home. Ride away. Perhaps forever.

Why did she even ask him that question earlier? What if she unknowingly pushed him into truly leaving?

They reached his bike.

“You remember the time I snuck out of the club house and got on your bike?” she asked him.

“I do. I remember everything you did. You nearly fell off.” Ripper pulled away and began to grab the helmets from the back of his bike. Lily wanted this moment to last a little longer. She didn’t imagine Ripper’s naked look of want earlier.

A test. She needed to find out what Ripper truly felt about her.

“But you caught me,” she finished. “I thought the bike would fall on me but you were there. I was twelve then but I’m no longer a kid, Ripper.”

Lily walked up to him and pressed a hand on his chest. His shirt got in the way of their skin touching and she wanted it gone. Lily had never seduced anyone in her entire life but right now, she wanted Ripper to fall for her. Give him a reason to stay. She’d go insane if he left Windsdale. A man like Ripper could disappear easily. Ripper and the others weren’t bound by the law.

Ripper closed in, his jeans brushing against her bare leg. She moved her hands lower, slipped them under his shirt to touch hard muscle. Ripper groaned, wound one arm around her waist, and dipped it lower to cup her ass. So big and warm.

“I never want to see you wearing these shorts again. They’re obscene,” he told her in a reprimanding voice. Who the hell did he think he was?

“The women who hang around the club wear stuff like this all the time,” she said with a shrug, trying to play it cool.

He glowered at her.

“You’re not my boyfriend or anything. You can’t tell me what to do.”

That did it. He undid the button of her shorts. Lily’s breaths came out short as Ripper moved his hand past the waistband of her underwear to touch her pussy. God. The contrast of his rough, big fingers felt good against her cunt. She couldn’t help it. A moan slipped from her lips.

Ripper leaned close to her ear to whisper the words she’d been waiting for all her life. “Then I’m going to have to make you mine. Your pussy, your body, and your heart. They’ll all belong to me soon enough.”

This is the 1st book I&#039;ve read written by Winter Sloane; she has done a great job at writing a good book; I can’t wait to read more of her books. The story line caught my attention at the very beginning and kept me interested throughout the entire book. I loved the chemistry between the characters. I received a free copy of this book via booksprout and I’m voluntarily leaving a review.

I just love an MC read so I could not resist giving this book a go and I really did like it. The storyline was well done and I was quickly hooked not only was it an MC read but also an older man younger woman/best friend&#039;s daughter romance. This is Lily and Ripper&#039;s book and i just loved that once he had decided to stop fighting his feelings for her that he did not look back. This is a great book I enjoyed it and cannot wait to read more from Winter.

Lily and Ripper are about to get your reader finetuned and ready to ride off with your breath. Lily might be young but she&#039;s lived a rough life taking care of her dad but the highlight of her life is her dad&#039;s best friend and vice president of their MC club, Ripper. Ripper is on the run stops at a bar and comes across Lily working there. As fate throws them together, he tries to fight it but he can&#039;t deny is attraction to the forbidden. Oh I love their story. It&#039;s got an alpha male that is so much more to the tough guy and it&#039;s as sweet as candy. Lily finally gets her man but will her dad be alright with all that&#039;s going on with his best friend and his daughter? Get ready... I received an ARC for an honest and voluntarily review

Very good MC romance. Not excessively dark or violent. Ripper is an true alpha, holding together his club while the president falls apart. Fed up, intending to leave, Ripper stops in a bar on the out of town. Lilly, daughter of his best friend and president of the MC club, is the bartender. Seeing her again, really seeing her, Ripper knows he can&#039;t leave his woman to face the future alone. He must claim her as his old lady, help pull her father out of the bottle, and return the club to it&#039;s former glory. No problem as long as he has Lily at his side! Very well written, with interesting characters. This is the first story I&#039;ve read by Winter Sloane, and I&#039;m looking forward to reading more. I received a free copy of this book via Booksprout and am voluntarily leaving a review.

Winter Sloane is another new author for me and since it is MC, I can&#039;t stay away. Add to that the trope of older man/younger woman which is one of my favorites and I&#039;m sold. It was nice to have Ripper not fight his feelings for Lily once the story started. She has loved him for what seems like forever but he was older, a widower and she was his best friend and president&#039;s daughter. Ripper fought his feelings for quite a while, wanting better for her than an MC life filled with danger. The drama in the story comes from her father, Bear. He is a raging alcoholic who has treated his daughter like dirt and he doesn&#039;t take the news well. There were a few times that I felt like I had come in on the middle of a series but couldn&#039;t find any other books and it didn&#039;t jar me out of the story. Since this was an ARC, I hesitate to mention any timeline mistakes, since that could have been caught in the final version. That said there were a one or two things of that nature but again, it didn&#039;t lessen my enjoyment. Overall, I won&#039;t hesitate to pick up another one of her stories.

This novel was well written and edited, with no typos or incorrect sentence structure that I could detect. The story was fairly enjoyable, though there was very little internal or external conflict keeping this couple apart, which stole much of the potential excitement away from this story. The hero and heroine get together at about 20% in and stay together throughout the rest of the book. There is some drama with the heroine&#039;s alcoholic father, but nothing which puts a wedge between hero and heroine. This novel employs the trope of the hero immediately declaring the heroine MINE!. I usually enjoy that trope the most when the heroine is not immediately on board with having a relationship with the hero, and that&#039;s where a lot of the internal conflict in their romance springs from. This story ended on a Happy Ever After ending instead of a cliffhanger, so that is a big plus. The heat level in this romance is fairly high, so I recommend this novel to readers who enjoy high heat motorcycle club romances. I received a free copy of this book via Booksprout and am voluntarily leaving a review.