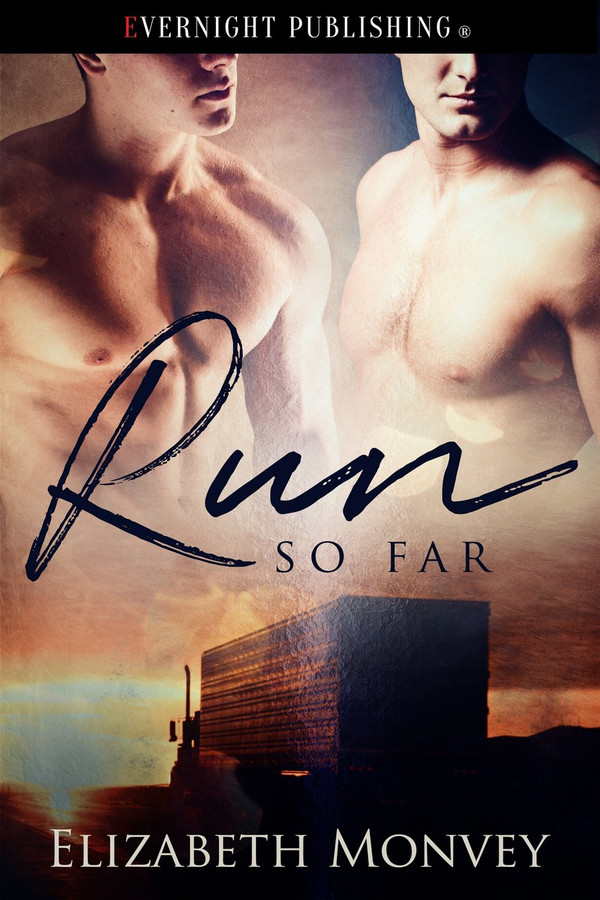 When Kyle stumbles into a truck stop diner, he just wants a bit of time to try to remember the weekend that has changed his life. He meets trucker Delaney Vance and when the older man invites him to travel with him across the US, Kyle thinks it’s the perfect opportunity to relax and find his memories.  As the two men start to get comfortable with each other, unexpected emotions start to develop on both sides.

Del is a man trying to forget the past and he’s done a pretty good job of it away from people, trucking for a living, and forgoing personal relationships.  But all of that changes as Kyle worms his way into Del’s heart.

The past is about to catch up with both of them.  With Kyle’s memories come a difficult and scary decision to make…ruin his family or hide the truth.  Can Del help him navigate a future when he himself can’t shake the ghosts of his own past?

All through Del’s nightly ablution, Kyle feigned sleep, catching only glimpses through half-opened eyes of wet, tanned skin. When he climbed up to his bed wearing only low riding flannel pants, he revealed a heavily muscled chest and arms with a smattering of hair that tapered down and disappeared into the waistband. Several tattoos decorated his biceps and back, mostly military in design.

Was it wrong to lust after a man he’d just met? Kyle had met lots of men he’d been instantly attracted to, but the impact Delaney Vance had on his senses was unlike anything he’d felt before. It made him hesitate, however, because he wasn’t sure if it was simply the situation that made the allure all that more potent. Still, he seemed to be in a constant state of arousal around Del and if he’d been alone, he would’ve taken his dick in hand and eased the pressure from his lustful thoughts.

So instead of focusing on Del’s magnetism, he tried to steer his thought back to the problem that had landed him here. Once again, he tried to concentrate on the events that happened last weekend, going step by step through the time line. Somewhere along the way the fog had to clear so he could remember every detail and sent a silent curse to his cousin, Brian, for placing him in the situation in the first place. Had he known what Brian was up to that night he never would have tagged along. Of course, had he known what was going to happen, he would never have snapped the picture.

But he had and he did.

Kyle rolled over onto his side. He wished the night would last forever. Simply hide in Del’s rig and forget the outside world. Forget his family. Forget the picture in his camera.

What could he do now? What should he do?

Kyle is running and ends up in a truck stop diner to try and decide if he really wants to go through with his half-baked idea to ruin his family. While there he meets Del and they both surprise each other by agreeing to continue along Del’s way and go together to his next trucking stop. Kyle had no idea he would run so far, nor what he’d find when he reached his destination. I found this to be a well-plotted, interesting story. Kyle knows that he’s seen something terrible, something that can ruin his family, but the trauma has given him a sort of block to help protect him from the true depths of what he’s facing. Running seems like the only option available and so he takes it, albeit with no real planning or forethought. While it seemed incredibly convenient that he met Del at the diner (and that they were so strongly attracted to each other) they both quickly realize they can help each other. The sizzling sex doesn’t hurt, either. I liked how we, the reader, only got to learn about the plot as Kyle remembered it in bits and pieces, but I couldn’t help and feel that this made the story seem a bit choppy. It also seemed slightly weird to me that while Kyle is recalling all these traumatic, emotional memories he’s having hot and sweaty sex with Del. I’m not sure how these two polar-opposite things could have been balanced better, but it made the whole story feel a little uneven for me, bouncing back and forth from erotic sex to intensely emotional recollections about a possible murder. It just felt quite uneven to me. The drama was very well written and I felt incredibly connected to Kyle and his plight. I eagerly turned the pages, wanting to see what he’d recall next and how the pieces would fit together. In this respect I feel the author did an amazing job with the writing and this really made the story well worth reading to me. With interesting characters and a gripping plot I would happily try more stories by this author.

Kyle is running…and he’s freezing. He’s also not quite sure what happened that made him take off with nothing but the clothes on his back and his camera. Kyle finds himself in a diner where he meets an older man, Del (short for Delaney, and how much do I love that name?), who buys him some food and makes Kyle an offer. Del can take Kyle to Virginia so he can get away and hide from what is making him run…whatever that is. Del never picks up hitchhikers. At least he didn’t until he meets Kyle. Something about the young man calls to him. He surprises himself when he invites Kyle along with him on what should have been about a three-hour ride to Virginia. Soon, Virginia becomes California, and Del starts enjoying Kyle’s company. He’s aware Kyle’s on the run from something, but Del’s running a bit himself. He served in the Army Rangers and saw a lot of things that invade his nightmares. Kyle grounds Del, and he sleeps better with him around. Eventually, the men begin a relationship, each comforting the other, but the past has come back to haunt them, and they have some decisions to make. I really liked this one. The blurb intrigued me, and at 83 pages (according to Amazon), I’d hoped it would be a nice way to spend an evening. I got everything I hoped for. Kyle and Del were well written, sympathetic characters, and I loved the idea of them getting to know each other during a long ride in a big rig. I also thought it was cool how Kyle knew who he was on the run from, and knew it had to do with a photo on his camera, but he wasn’t exactly aware of the circumstances behind that photo and how he got it. I’ve read a few amnesia stories, but they were all about total memory loss, not about a character who was actually aware of that loss, trying to figure out what happened. This was all new territory for me, and I was impressed. As I said, I found Kyle and Del to be sympathetic. They aren’t happy individuals, but they click together. It’s a novella, so there isn’t a lot of time for them to have a slow burn, but it didn’t matter. From the moment they met in that diner, the chemistry was obvious. Sometimes, you just know. I think my favorite thing about them is the comfort they give each other after nightmares. I don’t want to give too much away, but it’s not only Kyle with issues, and while Kyle is in a certain amount of danger, Del is in a kind of hell that broke my heart. There aren’t many major background characters. Basically, it’s Kyle’s mom, his uncle, and his cousin. The cousin, Brian, is a spoiled and entitled little bastard, and the uncle, Peter the cop, has catered to his every whim. Once again, I don’t want to give away major plot points, but Kyle has every reason to want to get out of Dodge. I have already mentioned the chemistry between Kyle and Del. Their love/sex scenes are smokin’ hot! What was great about them was the tenderness involved. Also, there was a sort of desperation about them…like they were clinging to each other in a storm. I love a good hurt/comfort situation, and Kyle and Del both give as good as they get. There was a bit of action toward the end, and it was nicely written, and even though I found the situation to be kind of unrealistic, I enjoyed it. Not everything has be accurate when it comes to how good a story is. All in all, I highly recommend Run So Far. In fact, I wish it had been longer. I would have loved to see Kyle and Del be happy together for awhile before I had to let them go. They’ll definitely stick with me.