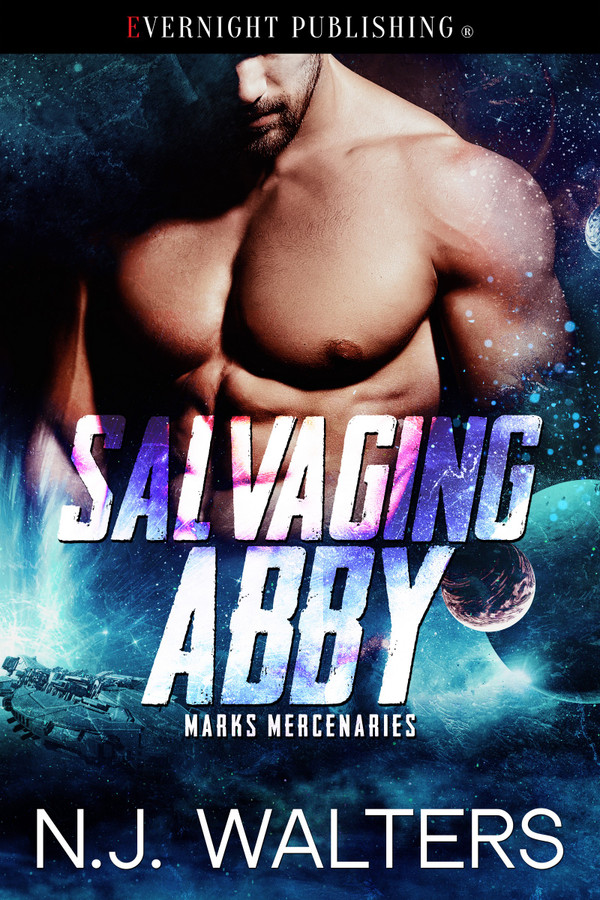 Space salvager Abby Marks has lived through the deaths of her brothers and an abduction. Independent, she lives by her own rules. But her life takes a turn when she decides to salvage what appears to be an abandoned Gravasian ship—only to come face-to-face with Vaden el Gravaso, an intimidating, yet downright sexy warrior, who seems intent on keeping her.

Engine troubles have disabled his ship. When Abby boards his vessel, she pulls a blaster and shoots him, so how can he not want her? Vaden knows her brothers are very much alive and searching for her, but so is her abductor. He isn’t about to let any of them have her. As her past and present collide, both their lives and hearts are at risk.

Information was power. Every Gravasian understood that. And the Dreamer wasn’t in any databank he had access to. His scan had revealed it was a small salvage vessel. “Who are you?” Vaden asked.

The voice was more melodic than he’d expected. Vaden narrowed his gaze and studied the youth. Suspicious bluish-green eyes stared back at him. He caught a hint of fear behind the bravado. Good, the boy was smarter than he appeared.

The flightsuit was covered by a chest protector, but the head was uncovered, leaving a prime target. The youth had fine skin, almost delicate.

A sneaking suspicion began to grow inside him. The boy was very pretty. Not unusual. He’d seen many cultures where the males were delicate and feminine in appearance.

“Why are you boarding my ship?” He might need help with repairs, but he wasn’t about to take it from some unknown party. Just a glimpse at the tech aboard his ship would be worth many credits from the Alliance government.

The people of Gravas guarded their tech and military capabilities. No outsider was allowed aboard one of their vessels or on their planet. The only exception was marriage, and that was a very rare occurrence. Outsiders weren’t welcome with open arms on his homeland.

His marriage contract should have been signed three months ago. Not that he’d had any feelings for the woman. He’d never met her. It had been a purely business arrangement, one he’d agreed to for the good of his family and people.

It had been a colossal mistake. And it had led to his current predicament.

Vaden couldn’t allow that to happen. The youth would no doubt alert the authorities, which would bring every space pirate and government within reach all coming for him and his ship. It was unheard of for a Gravasian to be on his own. They always traveled as a unit, well armed and ready for anything.

His pride and stubborn nature had gotten him into this mess. Now he had to deal with it.

He took a step closer to his opponent and noticed that the hair he’d thought was totally black had a white streak in the front. It was an unusual marking. Paired with the suspicious bluish-green eyes, it was suddenly very familiar.

It couldn’t be. Could it?

Vaden swore under his breath. He lowered his weapon and slowly removed his helmet, facing the woman who called herself Abe. Because now that he’d had time to study her, he had no doubt in his mind that the person holding a weapon on him was indeed female.

And he happened to know exactly who she was. “Hello, Abigail.”

He took the blast to the chest, staggering back a step. She’d shot him. The little vixen had actually shot him. She was just like her brother Flynn. Shoot first and ask questions later.

He caught himself before he grinned. Then he lunged forward as she tried to detach from his ship. He grabbed her arm and dragged her onto his vessel.

She fought him, ramming her elbows against his ribs, stomping her foot against his instep. But he felt none of it through his high-tech battlesuit. “Let me go, you son of a bitch,” she yelled. She fired again, this time hitting the door. It slid shut. The ship assumed it was being attacked and automatically went on total lockdown.

“Stop,” he ordered. He grabbed her hand and held the weapon down. “I’m not going to hurt you. Drop the blaster.”

Vaden was not used to being disobeyed. As a commander in the Gravasian space fleet, he was accustomed to his men following orders without question. Maybe it was only women who didn’t listen. First his intended bride and now this woman.

He increased the pressure on her hand until she was forced to release the weapon. It clattered to the deck floor. She whirled in his arms and struck out, managing to land a solid hit to his chin. There was enough force behind it that it rocked his head back.

“Enough,” he roared. “I don’t want to hurt you.” He wrapped his arms around her so she couldn’t punch him again.

Her eyes glittered with anger and fear. Her smell was light and airy, like flowers. The chest protector she wore hid her attributes from him, but there was no denying she was all woman.

Her thick lashes came down, momentarily blocking his view of her eyes. She was breathing heavily, but she stilled, like a hunted creature waiting for an opportunity to flee.

Vaden was also breathing heavily, and it wasn’t because he was tired. The little skirmish with her was nothing to him. He could fight for hours on end without stopping. He was Gravasian—fit and in his prime. And she was a woman, softer and weaker.

She glanced up at him, and he was lost in the depths of her eyes. He leaned down before he realized what he was doing and skimmed his lips over hers.

She sucked in a breath. “What? What are you doing?”

This is a novella in the Marks Mercenaries series and, although this can be read as a standalone, reading it after the others makes it better. Abigail (Abby) Marks is hiding from Jasper Freeman, the leader of the Simplistics who caused a mine explosion to kill her brothers so he could kidnap her to become his wife when she matured. Talk about starting with a bang! The characters are well developed with a fun plot. Abby has been on her own since she escaped from Jasper, which made her grow up faster than if the mines had not been sabotaged. I had to admire her strength, tenacity, and stubbornness. I could tell how much she missed her brothers and how their death affected her, causing her to have horrible nightmares of the explosion and knowing her brothers could not have survived. Her loneliness and fear of someone figuring out she is a woman rules her life. This drastically changes when she meets Vaden. He also has a stubborn streak a mile long and immediately figured out she is a woman and her identity. I loved how the characters evolved through the story. Truly, I loved it. I enjoyed the sex scenes as they are hot, but well done. The author used them to show how much they love each other and how strong their relationship is. There is one thing that I think could have been changed. They end up in bed almost as soon as they meet. I thought it would have been a good idea for them to get to know each other a little before they jumped into bed together. I enjoyed reading this book and I recommend reading the others in the series as they are just as well-written. This is a wonderful love story that shows that although you can be strong, having a soft place to land is wonderful. It also shows family is everything. originally posted at long and short reviews

I asked the author if the Marks brothers had cousins because I didn&#039;t want the series to end! One of the things I loved about all of N.J.&#039;s books is they&#039;re not overly complicated yet not dumbed down either. Intelligent writing that makes you feel like you&#039;re sailing along with the &quot;boys&quot; through SPACE no less! Great characters and wonderful amazing stories. READ THE BOOK

Abby Marks is an independent space salvager that has lived through the deaths of her brothers and an abduction and now lives by her own rules. But her life takes a sudden turn when she decides to salvage what appears to be an abandoned Gravasian ship and comes face to face with Vaden el Gravaso, who seems intent on keeping her. Vaden can’t help but want Abby when she boards his disabled ship and shoots him with a blaster. Vaden knows her brothers are searching for her and so is her abductor, but he isn’t about to let any of them have her. The search for Abby has been ongoing throughout this series, so readers have been eagerly awaiting her story and they are not disappointed as Vaden unexpectedly crosses path with her in this steamy and cosmically exciting romance. The romance is intense and full of chemistry and volcanic passion that grabs ahold of this couple and has them getting down and dirty amongst the engine parts fairly quickly but this relationship has a couple of obstacles that causes an avalanche of emotional turmoil. This fast paced plot has one of those obstacles determined to take Abby back and has Vaden and her playing hide and seek amongst asteroids while waiting for her brothers to show up. Readers can’t help but become glued to the pages as suspense, excitement, passions and tempers builds to adrenaline pumping, heart stopping proportions that readers love to indulge in.

This is a good addition to the series. The Marks brothers finally get their lost sister back after ten years of searching for her. Vaden was a very interesting character in the last book, so it was good to read about him and Abby. Flynn is the only Marks brother now without a mate, I hope he gets his story soon. I love his rough, take no prisoners personality, and the protectiveness he displays for his younger siblings.