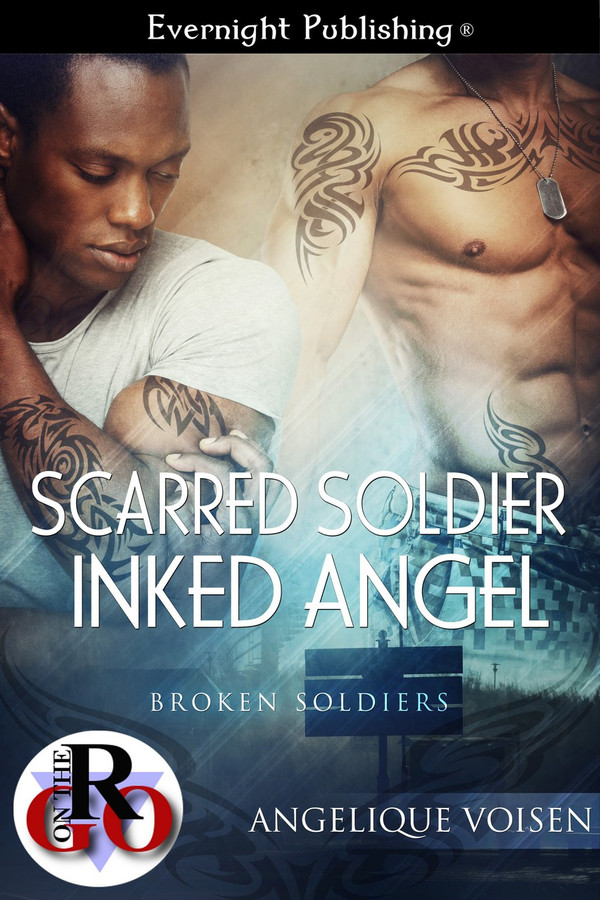 Max Rider thought putting on the uniform would make him a hero, but he only returned home a broken man. Rider’s entire back is covered in scars. He’s determined to cover them up with ink, and the only man he’d trust with a needle is tattoo artist, Mike Ferrara.

Five hours on his chair and Mike’s already fallen in love with his human canvas, Rider. Those who need work done on their skin always want something. A dose of courage. A lucky charm. Rider wants protection from his demons, but Mike isn’t satisfied with inking wings on Rider’s skin. He wants to claim Rider as his own, cast off his chains, and teach him how to fly.

Fabric tore, made a startling ripping sound. Mike tossed aside the remains of my shirt, unbuttoned my jeans, unzipped my fly, but I stopped him before he yanked my jeans down.

Something cracked inside me. Panic, insecurity, fear of rejection gave way to the realization I wasn’t ready to be with anyone, especially not Mike. Mike had seen my back a hundred times, but this was different. Stripped bare, without clothes and my armor to hide behind, I felt completely helpless. Like the moment a stray bullet caught a tire, and the driver lost control of the truck, plunging us headfirst into disaster. I remembered thinking how it felt like being on a rollercoaster. The moment the car hinged at the tip of the drop, before dropping into freefall, except nothing about that moment was illusion. The heat, smell of gasoline, of burning flesh and the screams were real.

“Look at me.” Mike grabbed my wrists before my mind could return to the past. I forced myself to look at him. “You’re perfect the way you are.”

He mashed his lips against mine. The force of him and his steady presence chased the awful memories away. The past didn’t matter, not when the present had too much to offer. I let Mike peel off my jeans, then our bodies touched—chests, ribs, and groins, creating sparks.

Mike gripped and palmed every inch of me like he couldn’t get enough, while his lips held me captive. Mike didn’t kiss. He thrust fire into me. Ignited life to the dead parts of me, and my body responded to him like a corpse waking up from a long sleep.

Mike grinded himself against me, and I wanted more. I sought his shirt and he released my lips so I could pull it off him. He chuckled. I licked my lips at the sight of black ink wrapped around every inch of his perfect copper skin. “Like what you see, Rider?”

“You know I do.” God. Mike was perfect. Self-doubt began to creep inside me again, but Mike pressed a finger to my parted lips, as if he knew what I was going to say next.

“Shut up, don’t spoil this,” Mike warned. I closed my lips around his finger and sucked. He let out a surprised breath. I watched his expression. Saw hunger, a shade darker than mine. “Why don’t you put that mouth to better use?”

Feeling more confident than I’d felt in months, I knelt and he let me pull his jeans and boxers down. His cock jutted out proudly, already standing at half-mast. I curled my fingers at his base, experimentally applied pressure to his balls. Mike groaned, sunk his fingers into my hair and tugged.

I licked away the pre-cum gathered at his tip. I took the condom he offered. Silently congratulated myself. My hands didn’t shake as I tore the foil open and slipped the condom on him. Feeling playful, I took my time tasting and exploring his veined length.

“Take all the time you want, Rider, but I’m warning you. When it’s my turn to return the favor, I’m going to enjoy tormenting you.”

I paused, looked up at him. The confusion must have shown on my face, because Mike said, “I’m going to tie you up, then enjoy the sight of all those lovely muscles straining when I force you to come over and over again.”

I liked this book. Mike and Rider are great characters who are being developed throughout the story. There is sexual content and violence but it is more Rider&#039;s memories. I&#039;m not sure if the next is about his brother&#039;s in the military or on them but I&#039;d like to see more of these guys