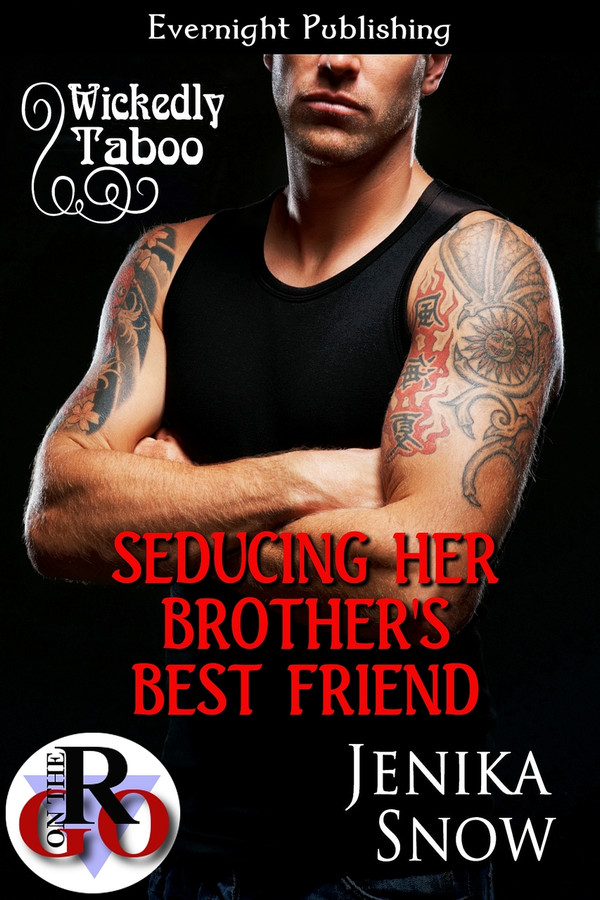 Kane Montgomery is the only guy Cayla Reinhart ever wanted. He was big, tattooed, pierced, and the one she craved to give her virginity to. It didn’t matter that he was ten years older, or her brother’s best friend. But seducing him before she goes to college proves harder than she thought.

It isn’t until the summer his best friend’s little sister turns eighteen that Kane realizes he wants her badly. She shows far too much skin, and her body could bring him to his knees. When he finds himself alone with her one night there is no way he can deny her or himself. Being with her might be the very worst idea he has ever had, but it was also the most undeniable.

The only problem now is telling her brother he has no intentions of letting her go.

Kane broke the kiss and stepped back. Gripping the back of his shirt, he pulled it over his head and tossed it aside. His belt was next, and when he unbuttoned and pulled the zipper down, he realized this was really a reality. Without thinking on it again he shoved his pants and boxer briefs down and grabbed her. His cock was hard and pressed against her belly. She gasped at the contact, which only made him swell even further. He didn’t like to boast on parts of his body, but he had no doubts he could make her feel real good with his cock. She was tiny though, and although he knew he would fit, there would no doubt be pain. He pushed her against the counter and used his knee between her legs to them. The scent of her arousal was like a sweet musk, and his cock jerked between them.

“If you think I’m taking you for the first time on my parents’ Formica counter top, you are fucking insane.” He smiled down at her and ran his tongue along her bottom lip. He had been so worked up and unaware of what he was doing to her lips that he hadn’t realized she’d slipped her hand between their bodies until her had his cock in tight grip. She used her thumb to run along the head of his dick, and he shivered.

“You’re pierced.” It wasn’t a question.

He took a slight step back and looked down to watch her small hand move up and down his cock. The Prince Albert piercing glistened under the kitchen lights, but it was the look on her face that had him really jacked-up. Her eyes were half-lidded and her lips slightly parted as she watched her actions. It was just a hand job, but holy fuck was it good enough it have him coming in just a few more strokes. It was painfully slow, but so fucking good. He braced his arms on the counter on either side of her and started pushing his hips forward.

“Am I doing it right?” She sounded so unsure of herself.

“Christ, baby. You’re doing it too fucking good.” Closing his eyes and gritting his teeth, Kane started pumping his hips faster and faster into her palm. He fucked himself with her hand, knowing he had to stop or he’d come all over her, and that was not how he wanted this night to end. “We have to stop.” He stilled his movements and placed his hand on top of hers.

“But I thought you liked it?”

Placing his forehead against hers, he took in a deep breath. “You have no idea how much I liked it. I liked it so much I would have come all over your belly.” He opened his eyes in time to see hers widen. “And when I come, Cayla, it is going to be inside of you.”

Common sense told him to help her dress and send her on her way, but his dick told common sense to fuck off. He wanted to love this girl, and show her that she was his physically. That little revelation came like a blow to his balls, and his breath momentarily stalled. Gripping her right below her round, plump ass, Kane lifted her up so she was forced to wrap her legs around his waist. He could feel her pussy juice had seeped through her panties, and his dick gave one mighty fucking jerk because of it. He wanted inside of her, now.

It has always been Kane Montgomery that has starred in every one of Cayla Reinhart’s fantasies. He is the only man she could ever love and she is bound and determined to seduce him before she goes away to college at the end of them summer. It doesn’t matter that he is older than her or that he is her brother’s best friend. Nope, sex-on-a-stick Kane is the only man that Cayla wants to give her virginity too. Kane knows it’s wrong but he craves Cayla’s touch and there is no way he can resist her womanly curves and her sensual beauty and he is finding it harder and harder to deny his feelings or his desires when it comes to Cayla Reinhart. When it comes to bad boys, author Jenika Snow knows once again delights readers tempting and teasing them to the irresistibly charms of bad boy, Kane Montgomery. With its short format in Seducing Her Brother’s Best Friend the author provides a perfect escape for the reader with its engrossing fast pace; yet still gives them a sexy and satisfying story centered on two well-developed, intriguing the unforgettable characters that turn up the heat right from the very beginning. The relationship between Kane and Cayla is sexy, sweet and filled with enough sexual tension that the reader can’t help but enjoy these two navigating their strong attraction along with the outside influences and issues that plague the would be lovers. Readers can’t help but fall a little in lust with the tattooed, pierced and very sinfully sexy Kane who when it comes to Cayla becomes a touching, tender and seductive man to fulfill and love every one of her desires. And readers will laugh-out-loud as Cayla tempts and teases her man in such a way that it keeps them turning page after page waiting to see who will win the battle. The ending wraps up perfectly and leaves the reader with a smile.

Cayla has finally reached the age of consent and thank goodness. She’s been trying to catch Kane’s attention forever, but now it’s “legal.” When he fails to take a hint, she takes charge. And gets all she’s ever dreamed of and more. Kane just noticed one day that Cayla was no longer a child, and he couldn’t do a thing about his attraction due to his fealty to her brother, his best friend. It’s just not done, especially when the sister is a decade younger. She’s a child and he’s been there and done way more than she can ever dream of. He’s just not good enough for her, but when presented with the gift she offers him, he finds himself in a position he never thought he’d find himself; under a woman’s spell. Loved this quick read that is every teenage girl’s fantasy. I thought the older brother’s reaction was a bit overdone, but hey – he knows a lot about Kane that we don’t, and it was hinted he had quite the past. That said, what it lacked in romance and flowers it made up for with passion and emotion and an ending I really thought was well-done. This is a guilty pleasure I think I’ll be reading again.