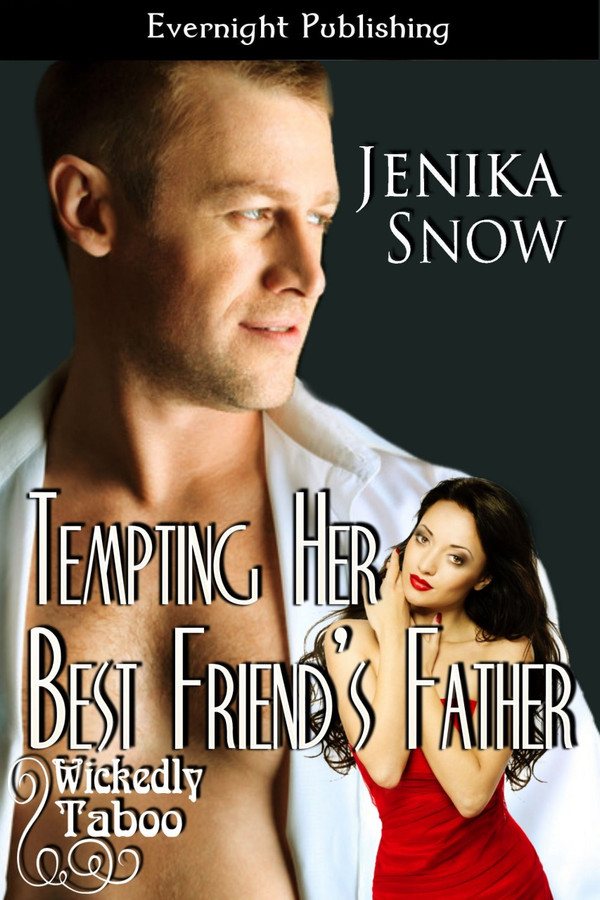 What is a young woman to do when she starts to see her best friend’s father as something more?

As Mona’s feelings for Isaac start to escalate, she knows that a relationship with him could never work. As her best friend’s father, it is forbidden to be with him, yet she can’t seem to stay away.

With an abusive family, her best friend in a toxic relationship, and more problems arising every day, Mona knows her future is unsure.

Each day brings Isaac and Mona closer together, but she knows she can’t keep their relationship a secret forever from Karalina, her best friend and Isaac’s daughter.

Mona must decide to keep her relationship with Isaac and risk losing her friendship with Karalina forever, or come clean and possibly lose them both.

The shower, to her disappointment, only seemed to intensify the ache between her legs.  The nightgown rubbed against her nipples, causing the buds to tighten even more and cause unbearable pleasure to course through her. When was the last time she had gotten off? She couldn’t even remember. The one and only time she had had sex was last year and it had been anything but memorable. She was no stranger to touching herself, but with everything that had been going on that was the last thing she had been worried about.

She just needed to go to bed and sleep it off. Maybe in the morning she could put this ridiculous notion of being with Isaac out of her head. When she opened the bathroom door the built up steam from her shower became a wall of fog. She clicked the light off and stepped into the hallway, but the hallway isn’t what she walked into.

A wall of hard, warm muscle pressed up against her chest and had a gasp escaping her. Her eyes had yet to adjust to the darkness, but she didn’t need to see to know who was right in front of her. The smell of his expensive cologne and the feel of his smooth chest reminded her all too well of what she really wanted. As if her body knew what was right before her, desire like no other rushed inside of her.

“I’m sorry, Mona.” The way Isaac said her name was deep and husky. The smell of the whiskey lacing his breath was like an aphrodisiac that heightened her hunger for him. His hands were wrapped around her upper arms, keeping her balanced, yet drawing her closer to him.

Mona swallowed the lump in her throat. Her lips were suddenly dry and her heart thundered behind her sternum. “It’s okay.” Was that her voice, a seductive whisper that sounded desperate?

With her eyes now adjusted, she stared into his face, feeling herself fall deeper and deeper into the web of arousal. Did he feel it too? That unexplainable pull? “Is everything okay?” Why in the world had she said that? It didn’t even make any sense.

Her heart thundered harder as she watched him lower his head. Oh God. Is he going to kiss me? This was what she wanted, but a twinge of fear mixed with her desire. On one level she knew this wasn’t a good idea, but on another it seemed like the perfect thing to do.

His lips were now a hair’s breadth away from hers. The smell of whiskey swirled around her and seemed to make her intoxicated as well. She knew the alcohol most likely had a big part to play in his uninhibited nature, and maybe she should have stopped it, but she couldn’t seem to tell him no.

“We were arguing about you.”

His words couldn’t stop the fog that covered her mind. “Who was?”

That comment did have her blinking a few times in surprise. “You were? Why?” His eyes stayed glued on her lips and she licked them involuntarily. She heard him swallow as he watched the act.

“Because she knew how I felt about you and didn’t like it.” He took a deep breath and continued. “I told Holly to leave because I wanted you.”

He wanted her? He looked at her, his eyes at half-mast and incredibly sexy.

“I want you, Mona.” One of his hands that had held her upper arm moved seductively down her arm, over her belly, and between her legs. He cupped her pussy, pushing the material of her gown into her cleft and causing her toes to curl.

“I want you so fucking bad I ache inside.” He took possession of her mouth in a searing kiss that left her breathless. His tongue was like silk against hers, and his hand was like fire on her cunt.

He used his thumb to rub circles against her throbbing clit while he kissed her. This kiss wasn’t anything like the one they’d shared in the living room all those months ago. This kiss was fierce and urgent. It was exactly how she felt at the moment.

He moved his other hand over her breast and cupped the mound. Her nipple was hard as rock and she knew he could feel it through the thin material of her nightgown. He pinched the turgid peak between his thumb and forefinger and she gasped against his mouth.

“Does it feel good, Mona?” he murmured against her lips as he continued to pull at the sensitive tissue. She nodded because she couldn’t find her voice. “Tell me how good it feels.”

i loved this story all the characters were so wonderful i fell in love with issac he was so sexy and caring the sex sceenes were so hot and believable. i love this author she writes like a romantic.

Great read! I recommend it. There is a lot of emotion and chemistry between the main characters. Can&#039;t wait to see what&#039;s next in this series.