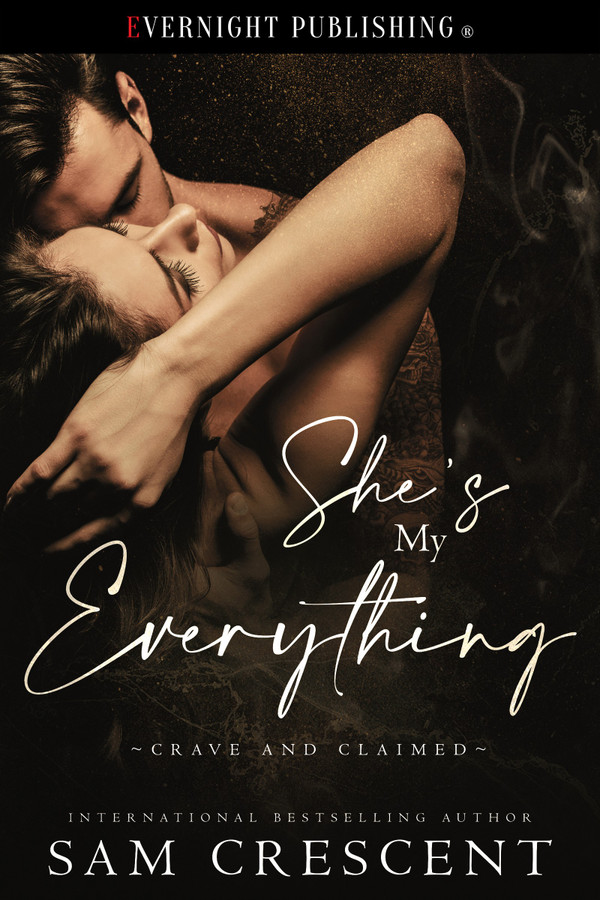 Laylah doesn’t know what to think when Blue acts strange, even asking her out on a date. There’s no way it can work. Where Blue is many of her firsts: first kiss, first date, first boyfriend—she isn’t any of his. His reputation puts her off.

Blue Jones is in completely, head-over-heels in love with Laylah Miller. They’ve been going to the same school, but after one look at her, everything changes. He has to have her. She’s the first woman he's ever fallen for, and he doesn’t want to go another day without staking his claim.

“Wait a minute, that was your first kiss?” he asked, finally following her into the kitchen. He couldn’t believe it. There was no way that was her first kiss.

She opened the fridge, grabbing a bottle of water. “Not all of us have a reputation for screwing the entire cheerleading squad.”

“Look, I will never touch any of them, ever again,” he said, putting his hand flat on the counter. “I was your first kiss.”

“The more you keep asking, the bigger the embarrassment, Blue. I don’t want to talk about this.” She unscrewed the bottle and took a large gulp.

He liked being her first. “Does that mean you’re a virgin?”

She spat out her water, quickly covering her mouth as she choked on some. “You can’t just randomly ask a girl that.”

“Why not? It’s a perfectly valid question.”

“It’s none of your business.”

He wasn’t getting anywhere with her. “You know I’m not a virgin.”

“I know you’ve shacked up with half of the town.”

She stared at him and finally shook her head. “Yes, fine. I’m a virgin, Blue. Most of my eighteen years have been spent hanging out with my friends, studying, and reading books. I’ve never had a boyfriend and kissing random strangers isn’t on my list of things to do before I grow up. You’re my first kiss, and the reason I slapped you was because…”

Her answer seemed to stretch on.

“Even though I thought it was pretty great, I didn’t want my kiss to be in front of a bunch of our friends who will do nothing but point and gossip about it. I wanted my first to be … I don’t know, different.”

He closed the distance between them, which he seemed to be doing a great deal with her just lately. All he wanted was to be near her in any way that he could.

Cupping her face, he tilted her head back, pleased she didn’t try to fight him.

“I took your first kiss and I didn’t know it was your first time, otherwise, I would’ve done all of this differently. When it comes to you, I want everything to be perfect. You’re special, Laylah. You always will be. I’m sorry I messed it up, but allow me to make it all better now.”

Her plump lips called to him, and as she released a gasp, he took possession of her lips, righting the wrong from earlier. When she remembered her first kiss with him, this would be the one she recalled with excitement.

The same kiss she’d one day tell their grandchildren about.

Blue is a man on a mission. He has spent years going to school and never knowing his future was right in front of him. When he discovers her, he believes his feelings will fade, but when he is unable to walk away, he knows she must be his. Jenny had no idea that destiny was calling, but when Blue asks her on a date, she can only say no. What would the town playboy jock ever want from a nerd like her? It must be a joke. When he persists, she tries to walk about but he is persistent, and her friends say to give him a chance. She believes she is making the mistake of her life, or is she? Blue knows he cannot live without Jenny. Jenny has never thought anyone would love her – especially not Blue. Can the nerd and the jock fall in love? Everyone is betting against them and only together can they find happily ever after. Will they go all in, or give up and walk away? She’s My Everything is a sweet love story with the classic tale of the jock and the nerd who find love. I enjoyed seeing Blue fight for Jenny against everyone, including Jenny. I read it all in one sitting just to find out what happened. It was worth the read and makes me wonder what is next in the Crave and Claimed series.

Sweet sexy hot .. He had to work hard to get her to go out with him let alone fall in love .. He loved he for awhile and he had a horrible reputation

I love Sam Crescent’s books and this was no exception. It was great to see the plus size girl get her man in such a drama free way. No bullying just a guy who, when he finds his girl, knows it &amp; goes after her. A bit short but I think all her books are short. Great read!!

I don&#039;t normally read stories where the main characters are in high school but this one caught and kept my attention. I actually loved it. Laylah and Blue are seniors and lately Blue has taken a complete interest in her. He&#039;s the football star and she&#039;s the book nerd. It takes him awhile but he finally gets her to go out with him but she still is very reluctant. I mean, he&#039;s a HUGE player, or he was in the past, but it&#039;s going to take a lot of effert to make her understand he&#039;s not that guy anymore. I liked the fact that there was no other woman drama going on. Sometimes it&#039;s a nice change of pace. The only drama was with the guys on his football team. It was resolved quickly and for the most part, the team changed their minds about Laylah when she was partly responsible for getting Blue to go back. Just a really sweet story that I love seeing Sam Crescent write every now and then. I love that the heroines in her stories are plus size ladies but are also happy with themselves. And of course, I always like seeing where the couple is a few years down the road so epilogues are always nice to read! One person found this helpful

I really enjoyed this book. A classic story of a high school jock falling in love with a nerd. Such a cute couple. I definitely recommend this book.

This book started amazing and ended the same way. Blue and Laylah are so realistic and relatable. Blue and Laylah have been around eachother since kindergarten. Blue had formed this almost obsession with Laylah. She was skeptical about Blue since he had quite the past. He has been through all the cheer squad, married women and cougars to say he has a past is putting it nicely. Laylah is a book nerd. She keeps to herself except for her two friends. Out of nowhere all of a sudden the popular jock is paying her too much attention. Sam&#039;s books are incredible and do an amazing job of keeping her audience engaged. Its nice to see how the characters begin to show growth and development to get to their HEA.

My Kind of Dirty by Sam Crescent

She's Mine by Sam Crescent

My Teacher by Sam Crescent