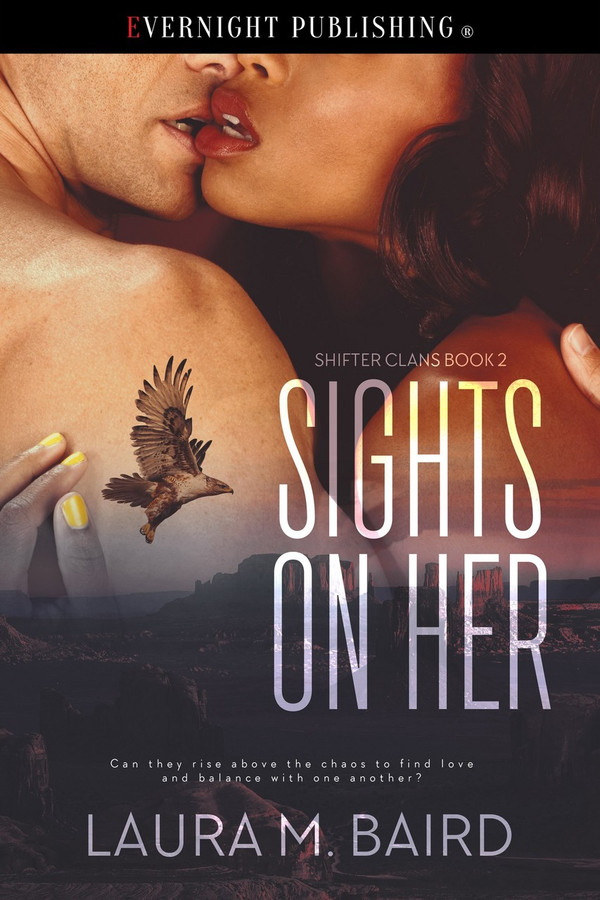 Hawk shifter, Brennon Underhill is on a mission to shut down rogue labs and take down those responsible for experimenting with humans and shifters. A startling connection ignites within him after one look at Mikki, the only survivor of horrific deeds, and he knows he’ll do anything to save her and make her his.

One moment Mikki Babineaux is celebrating with friends, the next she realizes she’s been kidnapped and put through torture. Her savior comes in the hulking form of a gorgeous stranger named Brennon who sparks decadent desires. But learning he’s a shifter, and she may now be one as well, throws her world into a tailspin.

Can they rise above the chaos to find love and balance with one another?

Brennon hooked the radio to his pants. He then raised his hand to the glass and flattened his palm to the window. The glass wasn’t any thin, two-pane panel that might be easily broken. It looked to be solid, nearly the same thickness as the door, at close to two inches. So what had caused the cracking? On the inside, no less. He looked to the woman with wonder, staring, beseeching her with his eyes to approach the glass again.

She looked at his hand, then his eyes, and took a hesitant step forward. Slowly, cautiously, she raised her hand but held it away from the glass.

“Come on, trust me,” Brennon whispered.

Her gaze locked with his as she pressed her palm to the window opposite his hand. When she made contact, Brennon could’ve sworn he felt her heat radiate through the thick barrier. And she must have felt something too because a tiny gasp escaped her mouth, causing the glass to fog with her breath. Her breathing increased, her chest moved rapidly, and her eyes dilated, becoming almost completely black from her wide pupils.

Brennon slung the rifle across his back while continuing to keep his sights on the woman. He began speaking in a normal tone. “I’m not here to harm you. I’m here to help.”

She blinked several times, a beautiful bright gold replacing the black as her eyes returned to normal. Her breathing remained a bit elevated, but at least she was breathing. And upright, as opposed to either passed out, drugged, or dead like the others.

“I want to open the door and get you out of there, but you’ve got to promise to remain with me. Can you do that?”

The woman nodded once as she quickly glanced to the doorknob then back to Brennon.

She smiled, showing brilliant white, straight teeth. “M-Mikki.” Her voice cracked, its low tone barely above a whisper as it was muffled by the obstacle between them.

She nodded several more times before attempting to speak again. “The door, locked.”

The raspy sound of her voice shouldn’t have sparked something inside Brennon, but it sure as hell did. Turning his concentration to the door, he did indeed find it locked. With nothing around to bang on the knob, and not wanting to damage the rifle any further, he figured he’d have to bust it open with his body.

“You’re gonna have to step back.” He spoke louder so she’d be sure to hear him. “Can you shield yourself with the mattress? I’m gonna have to bust the door.”

Mikki nodded and scrambled to the bed, easily lifting the pitiful mattress and holding it in front of her as she put herself in the corner.

Brennon lifted the rifle off and set it along with the radio on the floor beyond the door jamb. He backed against the opposite wall, giving himself about four feet of distance before launching his body at the door. It easily burst open from the force, banging against the wall. Brennon stopped it from swinging back at him, and when his hand slid around to the inside, he felt dents on the metal. As he started to look at what he was feeling, Mikki threw down her shield and began running toward him. He had just enough time to react as she jumped into his arms. Her body shook as he easily caught her petite form and held her close. Even with the smell of dirt and sweat coating the gown and her skin, he detected an underlying scent of something sweetly musky. A heady combination.

Hawk-shifter Brennon and his best friend, wolf-shifter Max trek through the jungle looking for the laboratory doing heinous testing on their various shifter brethren, along with a bunch of innocent humans caught up in the mix. What Brennon wasn’t prepared for was the knowledge that testing had progressed far beyond what they’d expected, successfully splicing human and shifter DNA already. Brennon also hadn’t expected to find himself so taken with one of the captives when they raid the laboratory. Can they stop this evil in time? This is the second book in the series and while I have read the first installment I was relieved that the author explained plenty of where things stood so that this book could effectively stand by itself. I feel that readers looking to read this book alone shouldn’t have any problems catching up. While the theme of splicing shifter DNA and doing testing on human (and shifter) subjects isn’t exactly new, and the experimentation isn’t overly graphic in its detail – readers who are sensitive to this sort of subject mightn’t find the story suits their tastes. While the romance that blossoms between Mikki and Brennon is hot, intense and deep Mikki was experimented on and Brennon is a shifter who is spear-heading the breaking down and shutting of the laboratory and tracking the Doctor in charge of these proceedings, so that aspect of the plot is quite deep, complicated and detailed throughout the story. I personally found everything to be written in good taste and not too over the top or gory/graphic with the details. Other readers might feel the descriptions are a little much – so that might be a consideration. Personally I thoroughly enjoyed the plot, and was pleased it wasn’t merely a token effort to give some aim to the romance. I feel the author did a good job explaining what was going on and detailing the layout of the laboratory. I didn’t feel quite as comfortable with the pacing of the story – it felt choppy and uneven in a few places to me but particularly when Brennon and Max were going through the laboratory – it felt suitably tense and rush-rush-rush, but then suddenly they could slow down and have a chat with the random captive – Mikki – whom they found. Then they found her clothes and food – even offering her a chance to shower, until they realized the danger and precarious position they were in. The sudden shift back to rush-rush-rush just had the whole scene feel a bit uneven. I was really pleased that, while a large portion of the story was from Brennon’s perspective, we did get a few chapters from Mikki’s point of view too. When the heroine was first introduced I didn’t really understand what on earth was going on with her. She appeared to be a human woman who had been kidnapped, imprisoned, had tests and experiments performed on her and then thrown her lot in with a random stranger (who claimed to be a hawk shifter on top of everything) and trusted them instead of fleeing for the nearest police station and safe haven the moment she was released. More importantly, I didn’t understand how she could grow to have romantic (let alone sexual) feelings for this man whom she had never seen or met before. It was a lot for me to take on in a very short length of time and so hearing directly from her helped ease a lot of my concerns. I loved the plotting, finding it complex and not just a token effort. I enjoyed the characters, though they’re not the usual sort and I’m not certain they will be to everyone’s tastes – I was pleased to get on board with Brennon and Mikki and ended up very satisfied with their romance and the chemistry in their sexual relationship. I was pleased that there wasn’t too much graphic detail of the experiments and craziness in the laboratory. I feel it would have been too easy for the author to dwell too much on that and it’s not what I want highlighted in my romantic fiction reads. Different and very well put together, I feel this will be a great read for many people. I’m pleased I have read it and will be keeping an eye out for any future installments.

This was a really great Shifter story. First of all, it avoided the &quot;magical hunk/hottie&quot; troupe. The main Male protagonist, Brennon,

In His Sights by Laura M. Baird