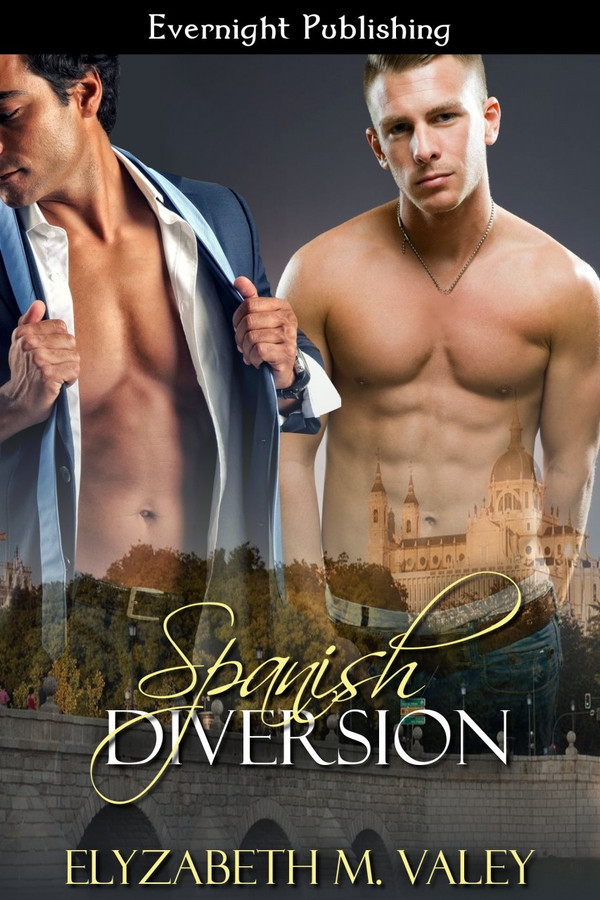 Ever since his last boyfriend labeled him as predictable and boring, Shane has gone out of his way to demonstrate that he’s not. He's moved to Spain, taken a job as an English teacher and decided that partying all night long is going to be his thing. Fun first is his new motto, regardless of what his heart has to say about it after meeting Alejandro.

After leaving his bed without even a goodbye, Alejandro thought he’d never see the sexy American again, so when he reappears in his life he can hardly believe his luck. With a chemistry between them that is off the charts, he wants something more than just a night of passion.

Shane insists he just wants to party but Alejandro is determined to make him see that, together, they can have much more than just fun.

Someone was touching him gently on the shoulder. Soft slender fingers slid tentatively from the base of his neck to his shoulder and back. He kept his eyes closed as the person touching him squeezed his shoulder softly.

Shane’s husky voice reached him. He had to be dreaming. Again, those fingers squeezed his shoulders. Alejandro bit back a moan. The pressure of the fingers increased, massaging his shoulder then sliding to the knots in his neck. Pleasure travelled to his groin, his cock slowly swelling, and caused him to sigh contentedly. The magical touch disappeared. Alejandro bit back his disappointment and turned his head to gaze at Shane. The blond was searching in his backpack.

“You fell asleep and your back is beginning to burn. I thought you should know,” Shane said, digging deeper into his bag.

“Thank you,” Alejandro said honestly. The American looked up, blue eyes as bright as the sky above. The corners of his lips lifted into a smile.

“Here,” he said, offering Alejandro the bottle of sunblock he’d found at the bottom of his bag.

“Would you?” Alejandro said.

“Please?” Alejandro curled his fingers around the container, purposely resting them above Shane’s. The other man chewed on his bottom lip and nodded.

“Thank you.” Alejandro relaxed against the towel again, eyes closed. His cock grew thick again as Shane poured lotion onto his back and proceeded to work the product onto his skin. His breath hitched as Shane’s tapered fingers slid across his lower back, close to the waistband of his swimsuit. His dick was steel against his stomach, and the muscles in his ass throbbed, but Alejandro kept perfectly still as the other man carefully slathered more lotion onto his skin. Firm hands worked their way across his thighs and below, all the way to his feet. Alejandro bit his arm to keep the groan lodged in his throat from bursting out as Shane retraced his path, his soft hands so close to his aching cock he wanted to scream. Breathing became difficult as Shane spread cream on his shoulders and his arms.

“You have to turn over.” Alejandro’s heart skipped a beat, the whisper of Shane’s voice next to his ear catching him by surprise. They were so close that if he turned his head in the right angle, he could probably kiss the other man.

Alejandro opened his eyelids and slowly twisted his head to face Shane. Immediately, the other man moved back as if he’d been burnt. So close and yet so far. Shane was on his knees, the book he’d been reading earlier hastily thrown across the erection Alejandro was certain he sported. His blue eyes downcast, he played with the cap of the bottle of sunscreen.

Alejandro’s pulse quickened as memories of his night of passion with Shane resurfaced. He hadn’t been covering his gorgeous hard-on then.

“I don’t think turning around would be a good idea. I have the same problem you seem to have.”

What a beautiful tale. Author Elyzabeth M. VaLey has a way with words. The characters are true to themselves and very believable. Shane and Alejandro are wonderful together. Their sex scenes are in a word HOT. From a perfect cover, blurb I could not put this book down until it was done