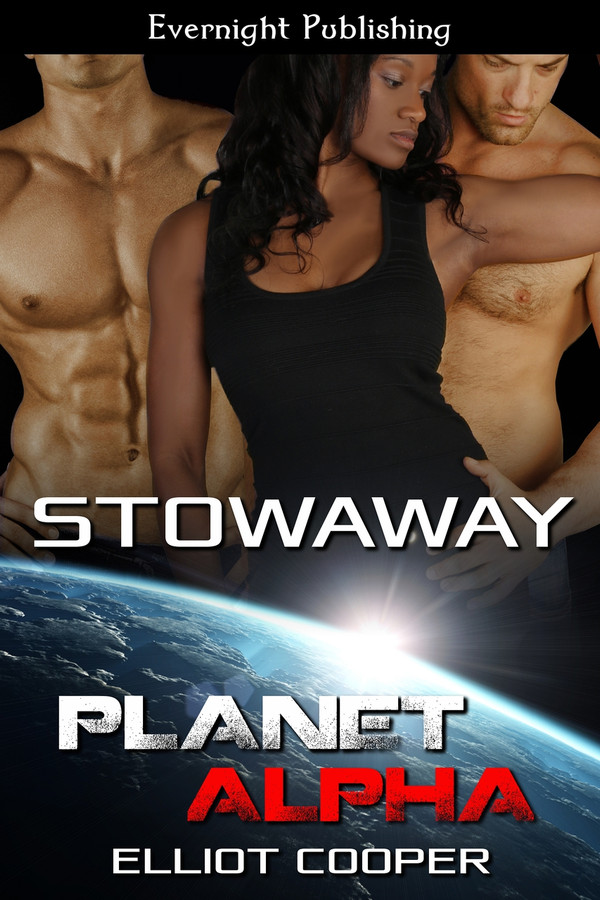 Thalia dreams of being rescued and claimed by handsome Alphan warriors. But her Xyran captor sets terrible traps for her potential saviors. When she takes matters into her own hands by stowing away on an Alphan ship, Thalia doesn't expect her welcome on Alpha to be contested by anti-human Purists or come with a deadline. Despite the help of her new friends, if she can't secure a bond in one week's time she'll be sent back to a dying Earth.

"Lox," Summer said in a sing-song tone. "Say something before my new friend finds you rude."

"A pleasure," he forced out, his voice a low rumble from deep in his chest as he fought to contain the swell of desire for the woman he'd just met. It reminded him of the way he felt about Korsik. Not at all like what he'd felt for Summer, who he could now see his heart and mind understood to be his family—exactly as Vall had expressed.

They stood there for a moment, touching, scarcely breathing, staring into one another's eyes. Lox wanted to pull her into his arms, pin her to the side of the house, and—

"Did you see the sweater she's wearing is made from that fabric Korsik wove during the winter?" Summer once again grabbed his attention.

He let Thalia's hand slip from his grasp and took a difficult step back, away from her. She deserved better, and he was man enough to admit that fact to himself.

At the invitation, he took in the simple sweater in the familiar fabric, gaze lingering on the tantalizing shape of her full, round breasts. He nodded, looking up at Summer again and forcing a small smile. There was no need to act like he'd never seen a woman before, no matter how captivating Thalia's body. She was clever enough to have stowed away on an Alphan ship, which meant she was indeed deserving of great warriors who would bring her pride and more gems than she could count. Not some coward who could only gawk at her.

"Did you make it, Summer?" Lox cleared his gravelly throat and ignored Vall and Glyn mumbling to one another in the shade of the porch's roof, voices so low he couldn't catch what they were discussing.

"Yes! I'm still not that great at sewing, but it's fun. Like a puzzle." Summer nodded, then tucked a strand of loose hair behind her gem-studded ear. She moved closer to Thalia and linked their arms together, startling her guest. "Let's go inside and sit. I want to hear my men's story, don't you?"

"We'll be very offended if you don't get your ass in the house and stop acting like we've brought home a plague," Glyn said. He arched his brows at Lox, then turned and tugged Vall through the front door.

"Do you have a problem with unclaimed women?" Thalia's dark brows scrunched together in clear agitation, her shapely lips drawn tightly together.

"No, it's not that," Lox said with a shake of his head. He opened his mouth, trying to think of something else to say to calm her, to prove his honesty on the matter. His body thrummed with the threat of a fight and the hidden potential for sex that he didn't want to believe was one sided. He'd heard the stories from his friends. Humans were as capable as Alphans of feeling the pull of desire to bond. He squared his shoulders and fixed her with the same hard look she'd trained on him. "I helped drive away those Purists. That should speak for my character."

"It speaks for your loyalty to your friends." Thalia took a half step closer, encroaching again on Lox's space, her neck craned upward gracefully in contrast to her wicked scowl. "Maybe that's all."

"Listen to your friend," Lox growled through his teeth and moved so close he could feel Thalia's warmth independent of early spring air. His skin tingled with anticipation that their bodies might crash together in passion—be it anger or lust—and his tesak threatened him painfully again, making his cheek flinch.

Her eyes searched his, her lips parted as she sucked in a sharp breath. Summer tugged at her arm again, and when she turned her head to look at her hostess, the spell was broken.

STOWAWAY starts with Thalia escaping from captivity on earth by stowing away on a spaceship that will take her to Alpha, where she hopes she will find her own bondmates. Thalia is a strong female lead, who has no problem with working to make things happen. She fashions her own escape, stands up for herself, and goes after Lox when he decides for her that she deserves better. Lox and Korsik are anomalies to the warriors of Alpha, as Korsik was injured and Lox stands by him. This classes them as cowards to the majority of the Alphans. Thalia isn&#039;t about to let someone else dictate to her though, not after all she has been through, and takes matters into her own hands. Although this is a novella, you get a complete story. It is also the first book in the series that I have read - yes, I know it&#039;s book 13. At least I arrived at the party, no matter how late! I would prefer to know more about the characters and places than what you get in this book, but I have an excuse now for reading the back catalogue. If you&#039;re not bothered by any perceived lack of information, then this would definitely work as a standalone. Well written, with no editing or grammatical errors to disrupt the reading flow that I found, STOWAWAY has a wealth of emotion to it. With detailed and sensual scenes between both our two main males and all three of them, there is definitely something here for everyone. Without a doubt, recommended by me. - See more at: http://erotic.theromancereviews.com/viewbooksreview.php?bookid=23272#sthash.88UP9F1b.dpuf

This series is completely new to me. I wanted to read this one because Elliot Cooper wrote it and I love him, and it did not disappoint. While I feel I would have understood some things easier had I read the previous books, the fact that I hadn&#039;t didn&#039;t retract from my enjoyment of this. Would it have been fun to know more about the characters? Sure, but I could catch on pretty quickly and still liked this story a lot. That said, I&#039;ll probably be reading the rest of the series at some point, because this was fun. I really liked that this story is just what it&#039;s supposed to be: a strong woman seeking escape and refuge and dreaming about bonding with two Alphans. I loved Thalia and her determination, after everything she&#039;s gone through, and I think she&#039;s the perfect fit for her men. The men had a great dynamic, with or withour her, even if Lox was a bit grumpy (and everyone knows I love grumpy characters). The three of them fit together nicely, and I liked that it was Thalia who was taking the lead in that relationship. It&#039;s also the porniest thing I&#039;ve read from Elliot Cooper, and it was hot, with an amazing chemistry between the three of them. If you like the blurb of the book go ahead and read it because it delivers what it promises