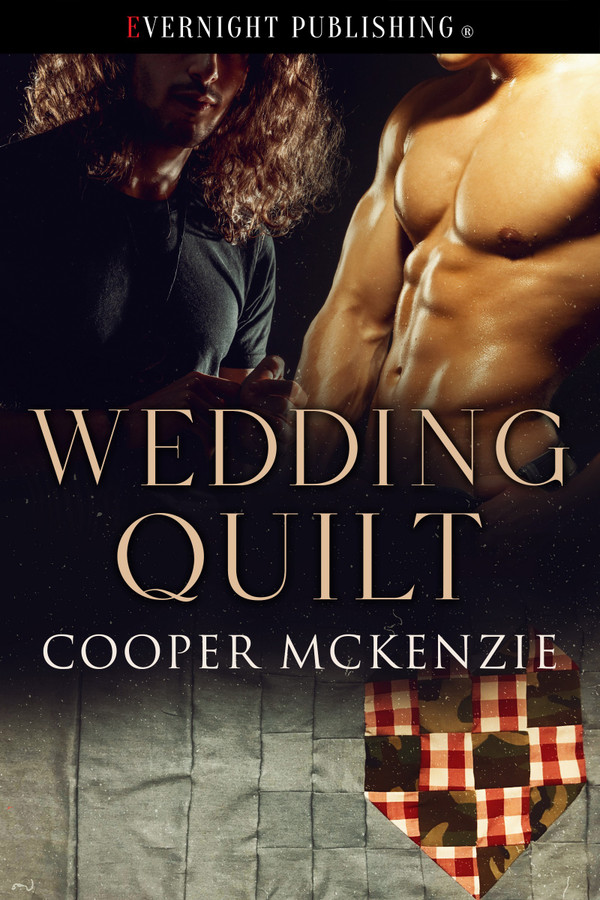 As their wedding date approaches, Mac spends more and more time on his phone, but won’t tell Jordan what’s going on. The man he’d left in charge of his father’s business empire can’t handle the job. With their wedding in less than three months, Mac wonders if selling the company would be in his best interest.

Jordan is having a creativity block and can’t find a vision for their wedding quilt. When they tell her about their upcoming nuptials, Nana becomes Bridezilla Grandma with wedding planning much grander than the men want. Between cake tastings, wedding venue tours, and Mac pulling away from him, Jordan begins to wonder if there will even be a wedding.

Can Mac and the board find a solution for the business? Will Jordan overcome his creative challenges and get their Wedding Quilt made? Can they get married without all the wedding shenanigans?

“So, what are you softening me up for?”

Jordan began to giggle. “Soften you up. That’s a good one.”

Mac couldn’t help but join in the laughter. Anything that brought Jordan joy made his heart happy. For someone who had never classified himself as gay until he’d seen Jordan rolling in the dirt with two baby goats, that was saying something. After only a few months with his super-shy, sexy quiltmaker, Mac couldn’t imagine life with anyone else—male or female.

Once the laughter died away, he slid a hand down Jordan’s arm. “Talk, Jordan. What’s going on?”

“I want to get married on March twentieth, the first day of spring. What do you think?”

“I think that’s a great day to get married, but that’s less than three months away. Can we pull a wedding together by then?”

Jordan smiled as he confidently said, “Of course we can. I also want to make us a wedding quilt for our bed.”

Mac shifted to look at him with a slight frown. “Are you sure? A quilt for us on top of the orders that are piling up and planning our wedding?”

Jordan nodded. “It will be fine.”

“All right, but I don’t want you wearing yourself out trying to do everything, okay? You’ll need to save your energy for the honeymoon,” Mac said with a dark chuckle.

“Oooo, I forgot about the honeymoon,” Jordan said with a grin.

Jordan’s eyes went wide as he shook his head. “Can’t we just call Pastor Bill to come over after church and have the wedding in the gazebo? We don’t have to tell her anything, just that she needs to show up in her church dress.”

Mac frowned. “Why don’t you want to tell your grandmother we’ve set a date? She could help with the planning.”

“That’s just it. She’ll want to plan a big, splashy, over-the-top, crazy wedding. Why can’t we just have her come over for lunch after church and surprise her?”

“Because she’ll be hurt if she doesn’t get to help in the planning. And maybe this would be the time to get back in touch with your parents? Celebrations like this are good ways to mend fences.”

Jordan huffed a sigh. “I’ll think about it, but I still don’t think telling Nana is a good idea because she’ll become one of those bridezilla grandmothers.”

“Oh, and don’t forget, sometime over the next few days, you are going to go through the resumes the college sent over and hire someone.”

Before Mac had forced him to take some time off between Thanksgiving and Christmas, Jordan had been working sixty or more hours a week trying to keep up with the orders for his artistic quilts. With the new website and magazine articles about him that were coming out in the next few months, Mac had no doubt Jordan would be overwhelmed with orders, once they started taking them again.

Mac sighed. “We talked about this, Jordan. You agreed to hire someone to help you with the parts of the work you don’t like to do, the not-fun parts of quilting.”