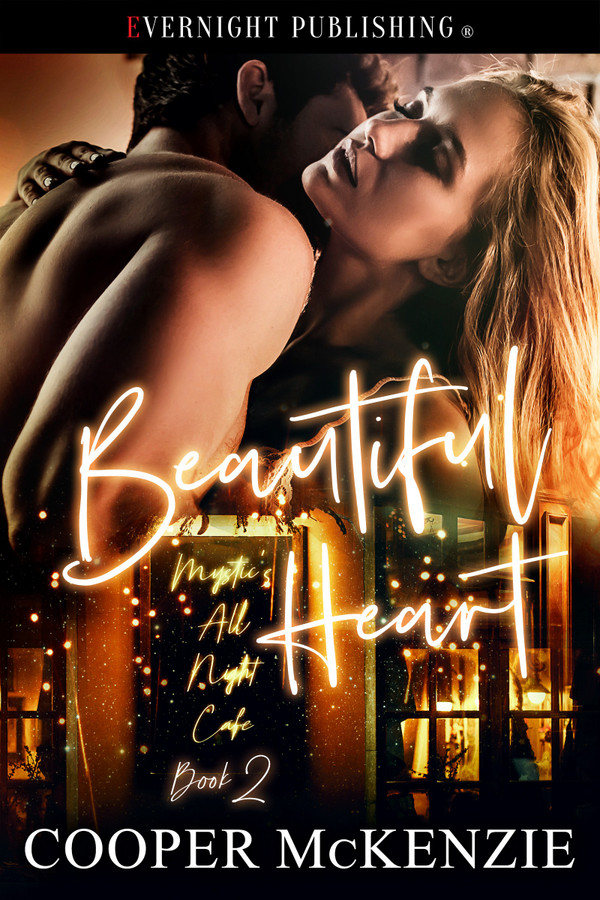 Mystic’s All Night Café—where the city’s supernatural world meet for the best coffee, tea, and pastries.

Gerri Markham wakes and walks the streets in the wee hours of each morning as physical therapy after a car accident left her a widow. When a pair of street rats try to mug her, a tall, dark man comes to her rescue. Little does she realize he's going to expand her horizons and completely change her life.

Livingston Daniels, Prince of the city’s vampire coven, has been looking for his mate for nearly two hundred years. He never expected the woman he would spend the rest of his unnatural life with to be the bland woman he saves from two homeless men.

Can Gerri change her life for the vampire Prince? Will Livingston give his mate the time she needs to accept him and his lifestyle? Will Mystic’s predictions come true?

The deep voice with a touch of a Caribbean accent pulled Gerri’s attention away from the entrance to the alley. The alley rats would not be returning—she hoped. Shifting her grip on the cane back to holding the knob at the top, she rebalanced her weight before turning to face her rescuer.

He had climbed from the car and stood just over six feet tall, which meant a good half-foot taller than her own five and a half feet. He was a gorgeous bald man with skin the color of the mocha latte she bought each morning on her way to the library where she worked. His dark gray suit, lighter-colored shirt, and dark tie were perfectly tailored to his broad-shouldered, muscled frame. That, combined with his choice of transportation, told her he had money. A lot of money.

“Miss? Are you all right?” His deep, accented voice sent a shiver through her. She smiled as a childhood memory of a commercial for a soft drink filtered through her brain. The star had the same wonderful deep voice.

“Yes, I’m fine. Thank you for stopping,” Gerri said after swallowing down the fear that lingered.

“I was on my way to visit a café nearby for tea and something sweet. Won’t you join me? I’d be honored to see you home afterward,” the man said gently.

Gerri knew he was trying to appear nonthreatening, but she wondered if she would be exchanging the frying pan for the fire if she said yes to his offer. Maybe this was all part of a bigger conspiracy, though she had to wonder what anyone would want with a forty-nine-year-old woman who struggled to walk.

“A café in this neighborhood? I don’t know of any place that’s open this late at night,” she admitted, though she still had not made up her mind about being alone with this man.

“It’s in the next block,” he said, opening the limo’s back door wider. “Shall we?”

Gerri frowned. “I’d rather walk, if you don’t mind.”

The man nodded with a smile that sent another warm shiver through her. “Of course. Give me just a moment.”

He leaned in the back door and spoke to his driver in a tone so low Gerri could not understand his words. When he straightened and closed the door, she started walking down the block, knowing he would catch up. After all, she was a slow-moving crippled woman and he was … not.

The man stepped up beside her as his long, black car drove away. “My name is Livingston Daniels, Miss.”

“Gerri Markham,” she answered, the childhood manners her mother had instilled into her kicking in.

“Gerri, interesting name. Is it short for something?”

“I was named after my grandmother. Her name was Geraldine, but everyone called her Gerri. Thank heavens, my mother refused to name me Geraldine,” she explained, not sure why she felt so comfortable sharing secrets about her life with this stranger.

“Ah,” was his only response as they reached the corner. “Smart mother.”

Gerri looked both ways, just to make sure there were no cars in the vicinity before stepping off and walking against the light. The man, Livingston, stayed beside her, looking as if he would like to take her hand, but holding himself back. Which was good, because though she felt a tugging in her heart and pussy to get closer to him, she was not sure what would happen if he did touch her.

As it was, an intriguing scent of citrus and ocean had her panties growing damp and her resolve to stay single forever wavered. Even as she fought the need to snuggle into him and just sniff his neck, she had to remind herself that he was, after all, a stranger.