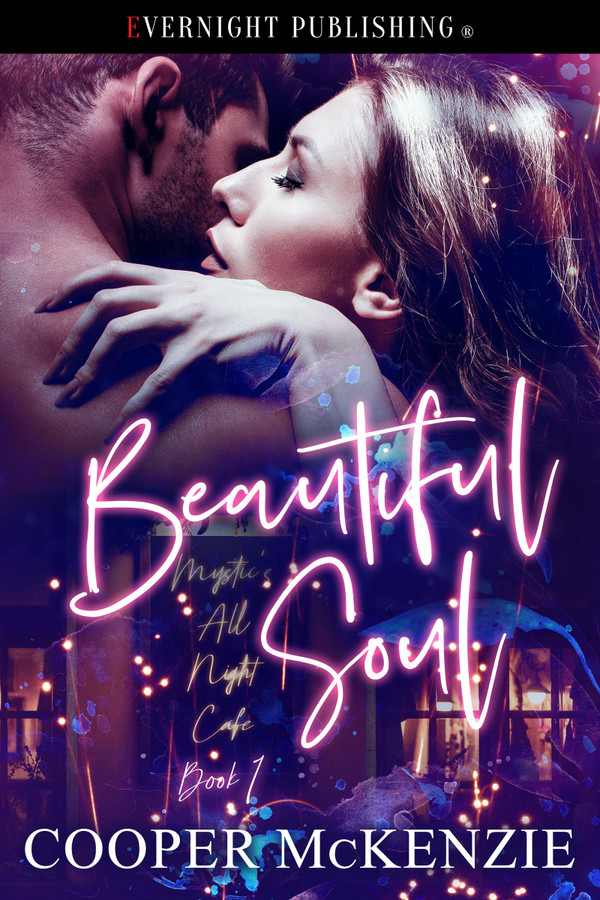 Mystic’s All Night Café—where the city’s supernatural world meet for the best coffee, tea, and pastry.

Five years after her ex-husband left her scarred, 51-year-old Lena Wellings continues to hide from the world. In the wee hours of the morning, she meets a man online. When he invites her to Mystic’s All Night Café, she reluctantly agrees.

Mage Kingsley James gave up on love decades ago, devoting himself entirely to his craft, and to his position as the city’s negotiator between the city’s supernatural species. Meeting Lena online intrigues him. Meeting her face to face enthralls him.

When rogues kidnap Lena, Kingsley must bring vampires, shifters, and other supernatural creatures together to rescue her.

Will Lena learn to see herself as Kingsley does? Will Kingsley rescue Lena in time? Will they be able to keep the city from war between the supernaturals?

Hello, is anyone out there? Is anyone awake?

Daria Wellings hesitated only a moment before hitting the “post” button. Then she waited, hoping someone on the local insomnia group she had joined a few weeks before responded. Hoping that he responded. Though they had only chatted in the group a couple of times, she found herself drawn to the man with the handle, KingJames.

He always seemed to be online when she needed a friend to talk to at 2:00 in the morning. Though she had asked about him in past conversations, he had never really answered her questions. She did not know if it was his job, insomnia, or something else that kept him awake and online in the wee hours of the morning.

She had accepted that her waking within minutes of 2:00 every morning was her new normal. She had even considered changing her work hours, but kept the hope alive that eventually she would go back to a regular 10:00-5:00 sleeping pattern.

As an at-home customer service representative, she needed to be awake and pleasant as she dealt with angry customers who called in to complain all day long.

Her fifty-first birthday several months earlier had sparked a change in her sleep needs, until she now saw much more of the night world than she wanted. But in the city, nights were not as dark as they should have been. Streetlights, neon signs, and tall buildings with lights blazing on various floors through the night, kept true darkness at bay. It also kept Daria from seeing the sky and making a wish, or several, on the stars overhead. The older she grew, the more she thought city living sucked, but having been born and raised just a few blocks from her current one-bedroom apartment, it was all she had ever known, and she really could not imagine living anywhere else.

Daria swiped her fingertip across the screen of her computer tablet to activate it. She had received a direct message from KingJames.

You have been invited to join the chat room, King James’s Court.

Curious to learn more about this KingJames, Daria hit the link. In the blink of an eye, she found herself swept into a cartoon chat room that reminded her of a television series about a time-traveling woman forced into being a healer for a Scottish clan. It looked like she was in the healer’s room with a huge fireplace and a fire crackling brightly, candles on several tables. Shelves on either side of the fireplace held jars and pots and wooden boxes. The table to the left side of the room was covered with papers and books and plants in pots.

Along the bottom of the screen was a chat box. A moment later, words appeared in the box.

KJ: If you are so fine, why are you online at this hour? You should be sleeping since you have work in the morning, don’t you?

DW: I do. Who knows? Stress, hormones, being a woman of a certain age, phase of the moon … take your pick.

DW: LOL. Tell me what is really stressing you. Maybe between us we can find a solution and you will be able to sleep.

Kingsley James waited impatiently for an answer, wondering what it was about the woman known as DariaW that pulled at him so strongly. He could not even explain to himself why he had joined the chat group, “No Sleep in the City for Me.” Long nights of mediating peace between the local vampire coven and the shifter pack had him looking for something to take his mind off maintaining supernatural peace in the city.

Being a mage was not just about herbs and potions and magic. He wanted a woman to warm his bed and take his mind off his work and hoped the woman he had chatted with several times over the past few weeks might be that woman.

While the various sects debated amongst themselves, Kingsley went online to see if the woman who intrigued was awake. She showed up in the group several times a week, stayed on for an hour or so, and then logged off again. He had promised himself the next time she checked into the group, he would invite her into a private chat room especially for her.

And tonight she had come on, begging for someone to talk to, so he sent the invitation message with the link to his chat room.

Kingsley stared at his computer screen even as his hands played with a pink quartz stone that he found himself grabbing every time he chatted with Daria online. If they ever met, the stone would be his first gift to her. He would also gift her with the hematite stone he had been carving into an intricately designed pendant specifically for her. He had charged both the stone and the pendant with protective charms and energies that would keep her safe.

He wished he could cut through the get-to-know-you, hesitant circling-one-another bullshit and demand a face-to-face meeting with her immediately. He wanted to look into her eyes and read the truth in her soul. Something in her words, her profile, pulled at him, but he needed to meet her in order to confirm she was the woman he had been searching in vain for since he had learned the difference between boys and girls.

After continually waking within minutes each morning of 2am and being unable to go back to sleep, Lena joins a local online chat community for insomniacs and workers on the graveyard shift. One of the frequent chatters in particular has helped ease Lena’s transition into embracing being awake for much of the earlier hours – someone with the screen-name of KingJames. Kingsley James has no idea what, exactly, it is about Lena that draws him, but he can’t resist the allure. His nights are crammed full of mediating between the constant bickering between the local vampire coven and the restless shifter clan and so joining the message board on a whim had seemed like a good, lowkey way to keep his mind off his real-life troubles. Can Lena and Kingsley find something special together during their very long nights? I admit I just couldn’t go past the idea of a mystical all night café where people get set up – there’s just something inherently romantic about that sort of image to me. While the plotline itself is fairly dated (I recall reading countless “magical cat/shoes/busybody sets the hero and heroine up together” style of stories in the late 90s and early 00s) I have to admit it’s still to this day a strong storyline and plot device. Even in these pandemic times people want to connect with each other and feel that magical spark of attraction and romance. So I really feel this storyline will appeal to a wide range of readers, especially those looking for something fairly straight-forward and maybe even slightly vintage in style of plotline. Added to this slightly old-school feeling I absolutely loved the more modern reading elements. Lena was not some shy, retiring virginal miss, but a middle-aged, battle scarred woman who had survived an abusive and difficult previous relationship and come out the other end. I was so pleased Lena wasn’t a cookie-cutter style of heroine and – even more importantly – was still willing to take careful and calculated risks to help change her own life for the better. I really feel she will appeal to many modern readers. The paranormal aspects to the story, while not delved into in great depth, also really helped give the whole story a more modern and slightly whimsical feel to my mind. Readers looking for an intense and graphic sexy story should find that this fits the bill. While Lena and Kingsley don’t jump into bed immediately, they do become sexually intimate very quickly and I feel the speed of this likely will mostly appeal to readers who like insta-love stories or those where the hero and heroine don’t spend a lot of time getting to know each other outside the bedroom first. I was pleased that even though Kingsley and Lena become intimate very quickly they do begin to grow a far strong and more emotional connection that helped sell me on the believability that their relationship should last long-term. This helped me feel more connected and invested in their relationship rather than just feel they were a fling or more interested in a quick romance. Readers who like a steamy and sexy story with elements of the paranormal world dabbled through should find this a quick and enjoyable read.

I love the story and the writer. Such talent is underestimated in our day and age. I&#039;m surprised there&#039;s not more attention towards this series.