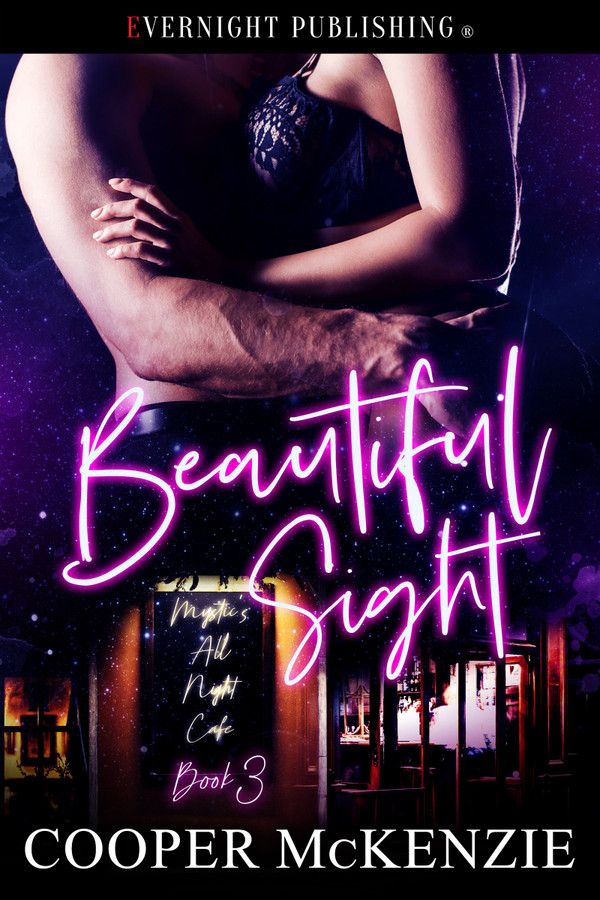 Mystic’s All Night Café—where the city’s supernatural world meet for the best coffee, tea, and pastries.

Blind for the past five years, Tessa Dubois has become a recluse, comfortable only in the home she shares with her son. When he gives her to a slave trader to pay a debt she had no idea about, she finds herself in a dark, menacing world with no one to ground her.

Jefferson Carstairs had just about given up finding his destined mate. Then he joins the council in raiding an abandoned airport warehouse where a solitary figure on the makeshift stage calls to both his man and wolf.

Will Tessa be able to survive outside the comfortable environment of her own home? Will Jefferson and his army of shifters be able to find Sonny and the rest of the traffickers? Can Tessa allow herself to love after so many years alone?

Tessa stood frozen, afraid to move. It had been seventy-two hours of fear-filled terror that had ended when a group of men entered and ended the auction of a dozen stolen women in a most violent manner.

Apparently their guards had been killed or captured in a noisy, chaotic free-for-all. She and the other women on stage had dropped to the floor when bullets began to fly.

Once the bullets had stopped flying the women had been unchained and fled. The blood and gunpowder drowned out the other scents of dust, stale air, fuel oil, and expensive men’s cologne.

The other women had run as soon as it had been safe. Only Tessa was left behind. She would leave, too, but wasn’t sure how to get down off the stage and out of the building. She also had nowhere to go. The son who had sworn on his college diploma to care for her the rest of her life, had handed her over to human traffickers like she’d been a bag of trash to be disposed of. She could not return to him.

Since he’d moved her in with him five years earlier when retinitis pigmentosa stole her sight, he had discouraged her from taking classes on how to deal with life as a blind woman, stay in touch with old friends, or even leave the house to walk around their neighborhood without him. He had made her completely dependent on him, though she hadn’t fought him.

Then, three nights ago, he’d allowed human traffickers to carry her out of the only place she was comfortable. Apparently, her sale was meant to cancel out half of a mountain of debt she did not know he had accrued.

So, here she stood, blind, homeless, with no ID, no money, and nowhere to go. She had nothing to her name except the clothes on her back. She didn’t even have her slippers, having lost them in the car’s trunk.

Where would she go from here?

How would she live now?

When she felt the vibration of footsteps approaching from several directions, Tessa tensed further, feeling like she might shatter into a million pieces from the stress.

“Tessa, are you all right? You weren’t hurt, were you?”

She recognized the voice as Gerri Markham, the woman who had been shoved into the locked room with them mere hours before. The woman who had taken charge. Though she knew nothing about her, Tessa felt they could have been friends in another time and place. But Gerri had her own trauma to recover from. She didn’t need to take care of Tessa as well.

When a soft hand touched her shoulder, she jolted and the arms wrapped around her middle tightened convulsively. “I’m fine,” she answered automatically. What else could she say?

Before Gerri could call her on the lie, a wild, woodsy scent of outdoors wrapped around her. A single deep breath and the muscles across her shoulders and down her back loosened. Something about that scent made her want to rub herself all over the man, or even better, take a bath in whatever cologne he wore.

“Who’s this?” the deep voice asked.

Just the sound of that voice sent a warm shiver down her spine. The scent of earth and forest intensified around her as the man moved to stand beside her.

“This is Tessa Dubois, one of the women set to be auctioned,” Gerri said. “Tessa, this is Jefferson Carstairs. He’s … um…”

“I’m a friend,” the man said, cutting Gerri off.