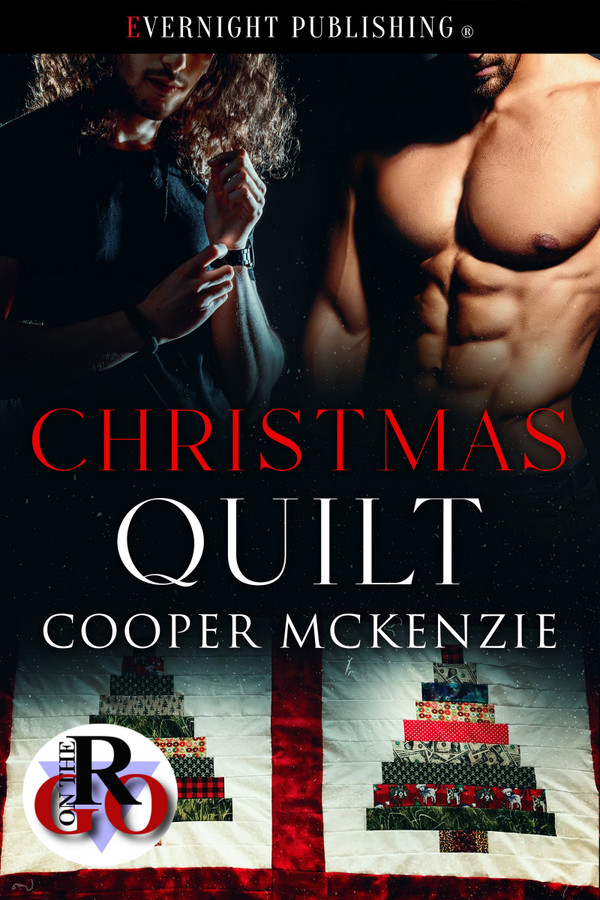 Christmas is coming and Jordan Potter has no idea what to get the man who has more money than many small countries, and claims he wants nothing for Christmas. With his quilt business growing and still too shy to hire help, Jordan knows he is neglecting his man. When Mac starts disappearing for hours at a time, Jordan wonders if his man is cheating on him.

For Mac Carlyle, Christmas is just another day on the calendar. When he sees Christmas is important to Jordan, he wants to make their first holiday as a couple special. He just doesn’t have a clue how, so he goes to the woman who knows his man best, Nana Georgia who makes an outrageous suggestion.

Is Mac cheating? Can Jordan come up with the perfect Christmas gift for his man? Will Mac finish Jordan’s gift in time?

Those four words, spoken as Jordan Potter stepped out of the bathroom that Halloween night, sent a shiver of dread through him. Then he looked at the man sitting against the headboard of the bed.

Mac Carlyle, his fiancé, lay in bed, looking like he should be in a magazine ad for mattresses or pillows or sheets or something. Since he had removed his lower right leg prosthesis, he wasn’t planning to walk out after the discussion, but that did little to ease the fear burbling in Jordan’s belly.

Instead of turning on the music and showing off the new belly dancing moves he had learned online while taking a break from his quilt making this afternoon, Jordan slowly crossed the room and climbed onto the bed. He settled on the mattress with a foot between his hips and Mac’s. He leaned against the headboard before pulling up the sheet and lightweight comforter to cover his wilting erection.

After clearing his throat, he was able to whisper, “What do you want to talk about?”

“You’ve been getting a lot of packages the last few weeks,” Mac said, sounding calm and curious.

“Um, I guess so,” Jordan said. He squirmed under his man’s direct, silvery blue gaze before dropping his attention to Mac’s wide, powerfully muscled chest.

Mac was so handsome, sometimes all Jordan wanted to do was sit and watch him move. In the months Mac had been living with him and Nana, he had not bothered to get a haircut, so his hair had grown shaggy, which only added to his visual appeal. For a man who was worth many, many millions of dollars, Mac sure didn’t look it.

To Jordan, he was his Mac. His best friend, his lover, and the man teaching him to be braver and work to overcome his extreme shyness. The man he loved and who loved him enough they had proposed to one another a few months ago. When the growing demands of Jordan’s quilting business eased a bit, they would get around to planning their wedding, though all Jordan wanted was Nana standing up for them—and a good cake.

Though he was now fairly comfortable going into stores, and was even able to talk to clerks, Jordan still preferred doing his shopping online. Especially when it came to Christmas. Now that they’d moved into their own home not too far from his grandmother’s farm, he had bought all new decorations for both inside and outside the house.

“Want to tell me what you’ve been buying?”

Jordan squirmed again, but settled when Mac slipped a hand under the covers and laid it on his bare thigh, only inches from his cock. Mac’s touch always had a way of settling him, calming him.

“Jordan, I thought we’d agreed to have no secrets between us,” Mac said. He stroked his hand down Jordan’s thigh and then back up again. This time he stopped just an inch from his reawakening erection.

“But … but it’s Christmas. Christmas and birthday secrets are the exception to secret keeping, aren’t they?”

Jordan watched Mac as the man thought over his words. “Christmas?”

“Uh-huh. While Nana and I usually don’t spend a lot on presents and such, we love to decorate and have a tree and go to church.”

Mac looked like Jordan had begun to speak some foreign language he’d never heard before.

After a moment, it struck Jordan. “Don’t you celebrate Christmas? Are you Jewish?”

Mac smiled. “No, I’m not Jewish. But Christmas hasn’t meant anything to me for a lot of years. I usually volunteered to work around the holidays so the married men with children could take the day off to be with their families.”

“Ah, okay. So, you don’t want to celebrate Christmas with me?”