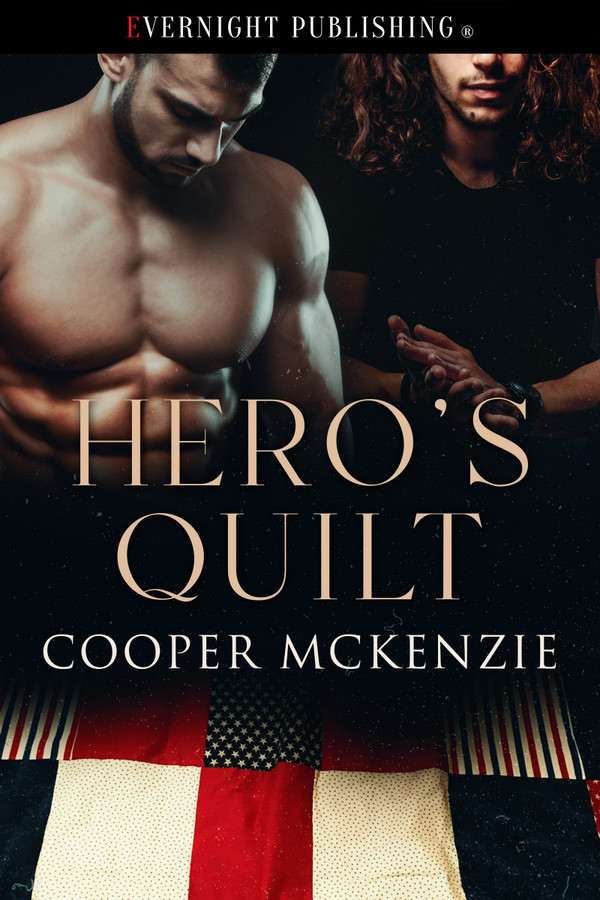 Injured in Afghanistan, Michael Alan Carlyle III ends up at Fort Hood, Texas where he receives a quilt with a letter tucked into a hidden pocket. Once discharged, he goes in search of Jordan Potter, the quilt maker.

Jordan Potter’s shyness has grown so severe he lives with his grandmother and makes quilt art in his attic studio. When Mac arrives, Jordan finds himself intrigued and wanting to push beyond his self-imposed boundaries in order to become a man Mac might be able to love.

Will Mac return to Texas? Will Jordan be able to overcome his shyness to grow into a man Mac can be proud of? Will Mac be able to admit he feels more than friendly feelings toward Jordan?

Curiosity continuing to drive him, Mac slid a finger around the edges of the label and found an opening. Exploring further, he found the label was actually a pocket, held closed with two snaps. Opening them, he reached into the pocket and withdrew a folded piece of ivory-colored stationary. A handwritten letter. The precise cursive that covered the page reminded him of his grandfather’s handwriting.

Thank you for serving in the military, and by doing so, keeping me and my nana safe. This was the first quilt top I’d ever made a few years ago. I found it recently and finished it, filling it with prayers for your speedy and full healing. I hope that it will provide you with warmth and safety, both during your recovery and beyond.

If you are ever in the Georgetown, Texas area, please stop by for a glass of sweet tea and a meal. Nana would love to have someone other than me to cook for, and we would both be honored to give you a hug and thank you in person for your service and sacrifice.

Best wishes for a bright future,

Mac read the letter a second and then a third time. Each time he read it, a shiver of what felt like recognition raced through him. It felt as if Jordan Potter had cut open his weary heart and settled inside it with a few words and the gift of a quilt.

“Well, Jordan Potter, I thank you for the quilt, and the invitation to visit you and your nana,” Mac said softly as he carefully refolded the letter and returned it to the pocket in the corner of the quilt. “Too bad I won’t be able to take you up on the offer anytime soon.”

Before Mac could figure out how to fold it back up so it would fit in the box, Nurse Barbara stepped into his room with her ever-present tablet and the basket of chocolate bars she used as incentive to get her patients to cooperate when she changed their bandages.

“Oh, how beautiful,” she said as she approached the bed. “Would you like me to spread it over you? Or would you rather I fold it up and store it away until you’re discharged? The ladies of the guild know they’re only supposed to gift quilts to the men who are about to be discharged because they sometimes have a way of disappearing when we send them down to the laundry.”

Mac looked from the blanket to the bubbly nurse, then around the room.

Lifting it toward her, he said, “Could you drape it over the recliner so I can see it please? That way I can admire it without it needing to be washed.”

“Absolutely,” the nurse said with a bright smile.

It only took a moment for her to spread the quilt over the chair. Once it was draped to her satisfaction, she rolled the recliner into a position that Mac could see easily from his bed.

“Thank you,” Mac said, once she finished.

Picking up the corner, Nurse Barbara read the tag. “Jordan Potter does the most amazing work,” she said as she stroked three fingertips over the quilt where it rested over the top of the recliner.

Mac wanted to slap her hand away from his quilt. Problem was, he would have to climb out of bed to reach her, and that would not happen until the doctor deemed him healed enough to be out of bed. Even then he would be on crutches and the nurse would easily be able to outwalk him.

At least he could now see the quilt from the bed. As he stared at it, his mindset began to shift. He had been fighting a growing depression since arriving in Texas. Knowing his medical discharge was inevitable, he had yet to figure out what he wanted to do next. Giving in to his father’s demands and returning to Chicago was not even a consideration. He needed a new direction, a new career, a new interest.

He just didn’t know what that direction might be.

I loved this story. It was heartwarming. Without giving away to much, it’s about a wounded veteran and a shy man with an artistic bent from a small town in Texas. I thought for a minute it was going to end well, but Cooper did not disappoint me. She came through in the end. This book will make you feel good.