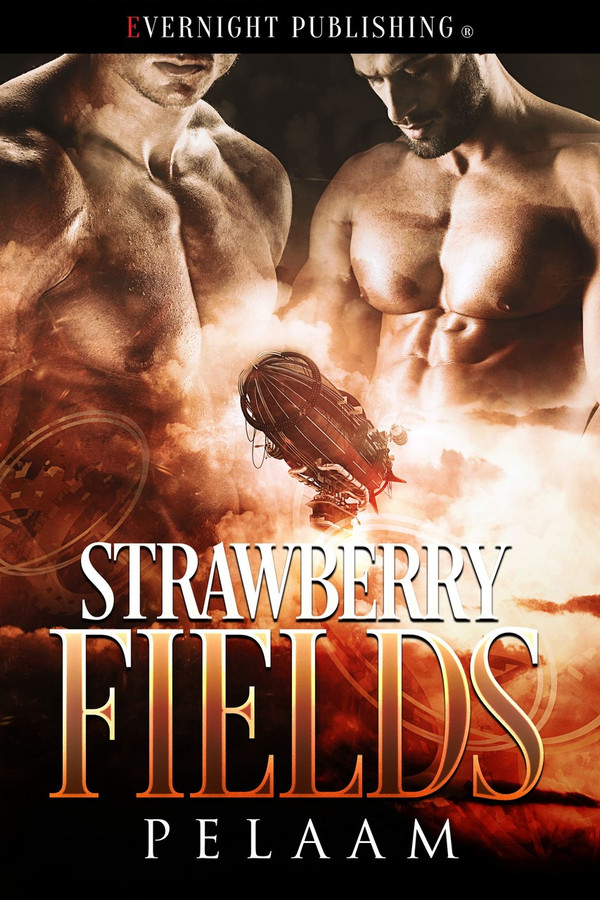 When the shares Nicolas’s family rely on become worthless, he seeks help from their estranged Uncle Secundus Broadberry—a selfish man with no familial loyalty.

Forced to live in a veritable hovel, Nicolas and his sister must find work to support themselves and their mother. Through his uncle, Nicolas meets Rufus Melbeck and accepts a post aboard his spaceship Strawberry Fields. Although the ship gives Nicolas a bad feeling, he quickly makes friends with Nathan Smith, a gentle, young man who seems very much out of place.

Nothing and no one aboard the vessel are what they seem. Nicolas soon finds himself plunged into a dangerous adventure the likes of which he could never have imagined.

Can Nicolas and Nathan survive the dangers of Strawberry Fields and solve the mystery that surrounds Nathan, or will Nathan's past reach out to destroy them both?

Less than one week after meeting Captain Melbeck, Nicolas found himself, duffle bag on his shoulder, staring at the odd bug-shaped ship, the Strawberry Fields. If he was honest, the ship was nothing as Nicolas had expected. Somehow, he’d imagined something, well … more child-friendly, for want of a better way of putting things. Instead, the ship looked daunting, almost intimidating.

As immense as an ocean liner, the ship stretched into the distance. Its hull may once have glistened and gleamed, but now it was dark, dented, and scorched.

Nicolas wished it was nothing more than his over-active imagination, but the nearer he got to the ship, the colder he felt. It was almost as if he was sensing an unseen presence. And it was far from friendly.

With a shake of his head, Nicolas strode forward more purposefully. His escort was already waiting for him at the door of a dilapidated building.

“We go in through ‘ere.” The man jerked his thumb at the door. “Up a few flights, and we access the ship up there.” He waved in a vague manner toward the top of the ship. “Once we’re aboard, someone else will take care of you.”

“I see. Thank you.” Nicolas had the distinct feeling that the man would be only too glad to pass Nicolas over. So long as the next person was a little more friendly, Nicolas would be as equally glad to be away from him. Nicolas hoped this man wasn’t typical of Melbeck’s crewmen.

A group of coarse, surly, and taciturn men hardly seemed the ideal pick for transporting children. Nicolas was sure there would be a matron, perhaps even a school teacher, as part of Melbeck’s team. The appropriate type of people to care for those children leaving all they knew and loved in hopes of making a better life for themselves.

As he gazed at the ship, Nicolas silently wished all the children making this voyage the best of luck in beginning over.

At the exasperated shout, Nicolas picked up his pace. It would hardly do to get a bad report about dawdling or daydreaming on the first day of his new job with Melbeck. The moment he’d caught up with the other man, he was led inside the building.

“I thought we were boarding the space ship?” Nicolas increased his pace to keep up with the man who scurried rapidly ahead.

“We are. There’s a gangplank, as we call it, that runs between ‘ere and the ship.” The crewman barely glanced in Nicolas’s direction. “Once everyone’s aboard, the gangplank is drawn back, and the ship can take off.”

“I see.” Nicolas felt as if a flight of butterflies had taken wing in his stomach. But the feeling wasn’t entirely apprehension. It was a similar sensation to the day Nicolas had stood outside Melbeck’s office. There was an edge of excitement and anticipation, as though something momentous was about to happen.

The crewman led Nicolas to an ancient elevator. In dull grey metal and hexagon-shaped, the elevator reminded Nicolas of a cage, with its open appearance. A metallic spiral staircase, snaked around the elevator as it creaked and groaned its slow way upwards.

Nicolas would almost have preferred to have used the stairs, wondering if the mechanism could safely complete the journey. The seconds ticked by with interminable slowness, and Nicolas’s heart thundered as if he’d run up the numerous flights of stairs the elevator passed by.

Eventually, the elevator came to a juddering stop. The crewman strode out with Nicolas close behind him, glad to be back on solid ground once more.

“Right, now.” The crewman stopped and jerked his thumb at a door ahead of them. “Through there. If yer don’t like heights, don’t look down. I don’t want to be coming across after you if you stop halfway.”

“Very well.” Nicolas wondered what the man meant, but as the door was opened and the crewman stepped away, Nicolas saw the reason for his warning.

A narrow metal runway with rails ran from the doorway Nicolas stood at and across to the space ship. Even with the rails, Nicolas could imagine anyone with a fear of heights would find it impossible to traverse the aptly named gangplank.

Determined not to fail at the first hurdle, Nicolas made sure his duffle bag was secure on his left shoulder and stepped down onto the gangplank. He’d have felt better if beneath his feet the plank had been solid, but it was the same mesh-like arrangement as the sides.

As he walked out, Nicolas felt a cold breeze, and the gangplank rocked gently. Gripping the handrail, Nicolas let the metal slide through his fingers as he fixed his gaze resolutely on the ship ahead.

As he got closer, Nicolas spotted another member of Melbeck’s crew. The man grinned widely, as if well-aware of Nicolas’s discomfort. Taking a deep breath, Nicolas stood taller and strode resolutely forward, but didn’t relinquish his hold on the rail.

“Broadberry isn’t it? The tinker that Cap’n Melbeck hired?”

“Yes. I’m Nicolas Broadberry.” If Nicolas had thought the other crewman rough, this one was missing most of his teeth and looked as if he hadn’t bathed in a month.

“Good. I’m Morgan, one of his engineers. The cap’n is busy at present. He’ll see you later. Go straight ahead to the first set of stairs and go down. Another member of the crew will take you to your cabin and give you an overview of the ship.”

“Thank you.” Nicolas edged past the bulky man and into the ship. It was nothing as Nicolas had expected. The lights in the ship were dim, and oppression weighed heavily on Nicolas’s shoulders.

Shadows danced and flickered on the cold, metal walls as if vying for a better view of him. For a heart-stopping moment, Nicolas was certain the walls were closing in on him and that he’d be crushed.

Something loomed toward him, out of the shadows, with a wheeze of pained breath and an ominous metallic clunk. Nicolas froze, unable to galvanize his legs into movement.

The figure came to a stop in a patch of pale light and Nicolas openly stared. The light from the lamp, or maybe it was the refection of the copper walls, turned the stranger’s hair blood-red, but his face—it was the face of a Botticelli angel. Pale, smooth, flawless skin, perfect pink Cupid’s bow lips, and framed by the shoulder-length red tresses.

The man was more beautiful than anyone Nicolas had ever seen. And he seemed totally out of place aboard Strawberry Fields. Gentle, polite, he was the antithesis of the men Nicolas had met so far.

It was only when the man took another step, that the origin of the mechanical sounds was revealed. The stranger had a mechanical brace on his left leg. Nicolas scowled. It looked ancient, rusted in places, and in desperate need of attention.

“My name’s Nathan. Nathan Smith. Captain Melbeck told me to show you to your quarters and acquaint you with the ship.”

Naming a spaceship Strawberry Fields is an indication for oddness – at the very least – and as it turns out, this story contains plenty of strangeness. Set in a steampunk world where “mechanicals” are used for entertainment, yet can become more in the hands of people with special talents, the initial events lulled me into a false sense of security that made me believe I could sort of predict what was going to happen. I have rarely been more wrong, and I loved all the surprises the author came up with to entertain, scare, and delight me in equal measure. Nicolas is a pretty privileged young man, though he is not arrogant about it. He is shy, likes his withdrawn life in the countryside, and loves to tinker with his mechanical inventions. He leads the life of an English nobleman around the 1880s, does not have to concern himself with the realities of life (like where the money comes from that pays for his lifestyle), and can do pretty much what he wants all day. Boy, is he in for a rude awakening! Once the money his family depended on is gone (through no fault of their own, but still), Nicolas has to deal with the realities of life. Their uncle refuses to help, instead he sounds more like wanting to exploit them. Nicolas has to work, and the job on a spaceship that he is given is not at all what he expected. But, as he soon discovers when he meets Nathan, there is a bit of light even in the darkest corners. Though it gets a lot worse before it gets better! There is a mysterious darkness on the spaceship, and Nicolas and Nathan have to be very careful if they want to survive the evil captain’s plans. If you like stories set in a steampunk world, if danger and adventure are your thing, and if you’re looking for a read filled with interesting characters, lots of danger, some dubious machinations, and a very sweet romance, then you will probably like this novel