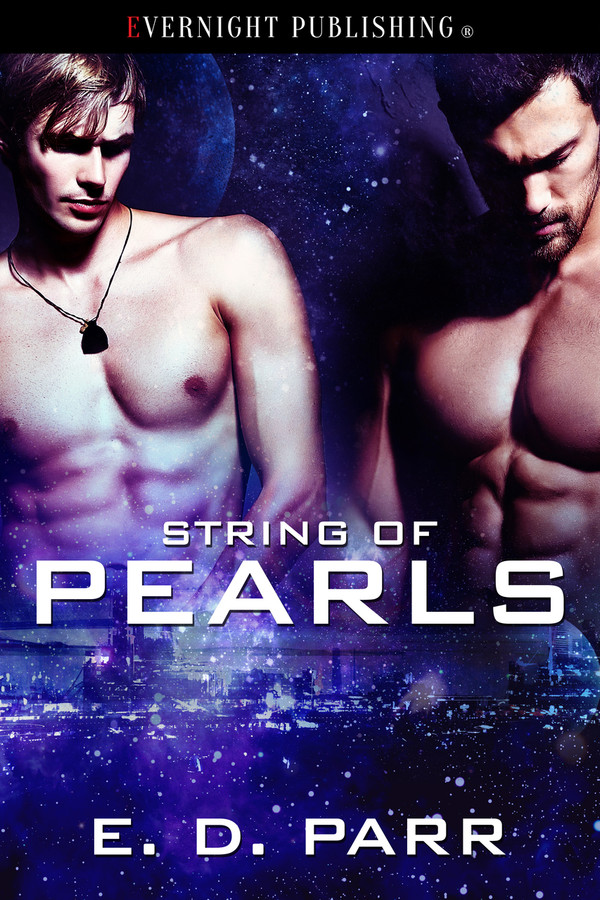 Tobias Mars is an elite space pilot completing a special mission. When on a water planet, recently ravaged by space pirates, he discovers Dreft Hann hiding and injured in the sand dunes.

There’s instant attraction between the two men, but Tobias believes the fact Dreft is in his care precludes him from showing his growing love for the young man. What’s worse is his shocking discovery of Dreft’s real identity. Even so, Tobias can’t deny his feelings for Dreft.

As Dreft falls in love with Tobias and dreams of joining the elite pilot squad, trouble is brewing from someone in Dreft’s past. Will love finally win with so many obstacles in Tobias and Dreft’s path?

A smile tugged at the corners of his mouth. Anyone would think I was here every night.

“Thank you. Is Duet available?”

The host’s expression reflected regret. “I’m sorry but they’re booked. All the teams are. I do however have one delightful companion available. He works solo. He’s very beautiful.”

Tobias broke into a grin. The guy’s selling this one and yet he doesn’t have to. I just need someone, practically anyone. “He sounds perfect. Thank you.”

His host led him to a vacant room and left him. “Your companion will be along soon.” He gave a small bow.

If nothing else, the place has made me smile tonight. Amused, Tobias looked around, laughing softly. Only a few candles struggled to light the room, the sheer drapes unusually drawn, didn’t stir, which meant the tall windows were closed. Tobias pulled off his jacket and undershirt in one hurried move. He glanced at the low bed and desire filled him. His cock hardened as he thought about the pleasure to follow. Dante’s right. I do need this. He pushed off his boots and pants, stripping completely. Tobias knew the companion would arrive naked and he wanted immediate contact with the hard body of a man. He sheathed his cock in one fist and stroked to ease the ache to fuck.

The door opened. Tobias thought one of the Duet pair entered the room. The same colored face paint swirled on the man’s face and extended into his hair, making it glint red and gold in the candlelight. The host was right. This guy was beautiful. His body hard, and his cock huge, erect and enticing, Tobias went to him and clasped him close. His cock rammed against the companion’s. The man’s gasp flew over Tobias’s ear. Tingles shot down his neck and he swept his hands down the man’s hips and grabbed his ass. He shifted his head and kissed the companion as he rocked his hips, rubbing his cock against the gorgeous man’s ramrod column.

As the companion returned the kiss, his hands drifted up and down the sides of Tobias’s body in barely-there sweeps bringing up goose bumps. Everywhere the man touched tingled.

Tobias broke the kiss to breathe. “Do you have a name you use?” he murmured against the companion’s delicious lips. He knew the companions never gave their real names and that’s why some of them wore makeup or eye-masks, too, to protect their identity.

Without replying, the man slipped his hands around Tobias’s face and kissed him again, a gentle merge of lips on lips.

The tenderness in the kiss poured over Tobias’s lonely soul like melting honey. A soft moan escaped him as the man shifted one of his hands to between their bodies and grasped Tobias’s cock. In a fluid movement, the companion broke the kiss and dropped to his knees.

He grasped Tobias’s hips and pulled, burying his face in Tobias’s balls. He traced a path to the head of Tobias’s leaking dick with his tongue and lapped up the pre-cum there.

Tobias groaned and grasped handfuls of the man’s dark hair desperate to come. He whispered, “I need this so badly. Make me come.”

The companion grasped his shaft in a strong grip and then took the remaining length of Tobias’s cock into his mouth. In strokes that emulated fucking, he brought Tobias’s dick in and out of the tight circle of his lips, as he trailed the fingertips of his other hand around Tobias’s aching, lifted balls.

Tobias could hardly breathe. His moans matched the delectable movements of his companion’s tight wet mouth around his cock. In and out, sucking his cock and stroking his balls, the beautiful man gave Tobias such pleasure his legs weakened. He took his hands from the companion’s lush hair and leaned on the man’s muscled shoulders. The waves of orgasm built through his cock until he yelled as spurts of pleasure pumped out his cum. His ass clenched tight. His eyes closed. He groaned as sensations traveled between his legs and zapped in his balls. He hammered his hips taking the last of the mind-blowing feeling.

The companion held his thighs until Tobias stilled. “Fuck … that was intense.” He let the man make the move to free his cock. The slide from his companion’s cum-wet mouth made his cock throb and Tobias sighed at the delicious feeling.

Slowly, the companion kissed up Tobias’s stomach to his chest and then his neck. He sucked the soft part of Tobias’s shoulder sending tingles through Tobias.

I absolutely LOVED this fantastic, engaging, intense, action packed, poignant, fast paced, adrenaline soaked, and smoking hot story. Filled with mystery, conspiracy, and mayhem, E.D. Parr has skillfully crafted a tale that may be short in length, but packs the punch of a much longer one.