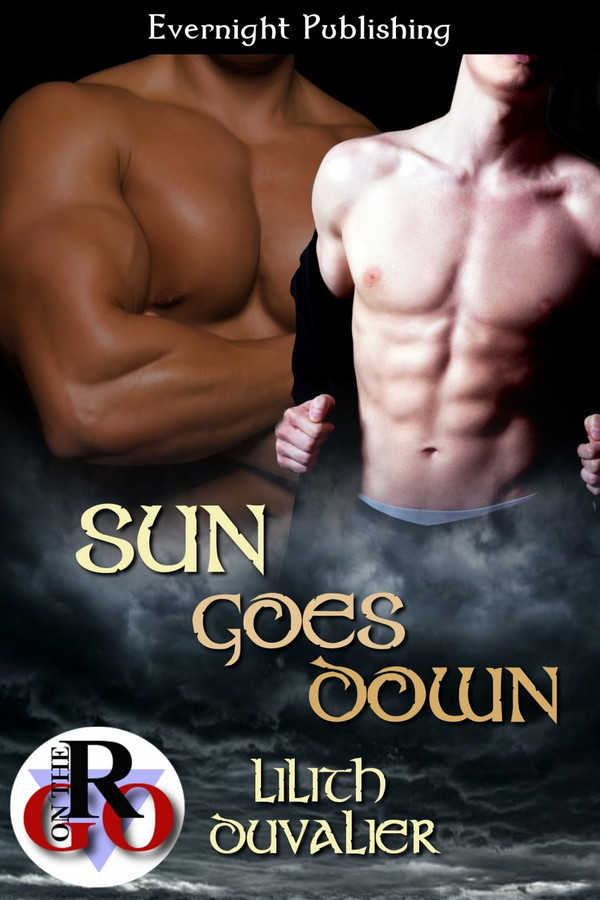 To be with your vampire lover for eternity, first he has to turn you.

To become a vampire, first you have to die.

Levi has wanted to be like Gerard—strong, rich, ageless—since they first started their relationship, and the night for Gerard to change him has finally come. But Gerard doesn't want to rush through it. He wants to savor it.

Levi finds himself, in his last hours as a man, stretched to his limit.

It was a sound of hunger about to be sated.

The tiny pinpoint of pain deepened suddenly. Levi whined and jerked in Gerard’s lap. The hand at his cock moved away. Both of his lover’s hands, soft and smooth but so much stronger than his own, clamped down against his waist, immobilizing his body. He craned his head up to look down his torso and saw the gold of Gerard’s head bent over him, just at the place where the pain was blooming. He felt the wet swipe of Gerard’s tongue across the sensitive skin. That tongue swept across Gerard’s bottom lip as he lifted his head. His fangs glinted in the candlelight.

Levi realized, with a shiver, that he had only ever seen them partially extended. The sharpened, elongated canines his lover had flashed him after lapping blood from his thighs during lovemaking were nothing more than a suggestion of his real fangs. Now Gerard’s fangs hung out of his mouth, about halfway down his lower lip.

“Levi,” Gerard whispered, petting his fingers between the space that separated Levi’s bottom rib from the one above it, far enough from the beading blood not to smear it. “Trust me.”

Levi shook his head. “You’ve never…. You’ve never bitten me that deep before.” He cleared his throat, suddenly embarrassed. He sounded like some ditzy young virgin. Of course tonight would entail more than just love bites.

Gerard bowed his head and placed a gentle kiss to the spot that mirrored the bite marks. As he did, the smooth front of his fangs slid over Levi’s skin. They were cold from the chill still coming in from the courtyard. “Apologies, my love. I have been looking forward to this moment for a very long time. I allowed myself to become overexcited. I should have done more to prepare you.”

Gerard thrust his hands underneath Levi’s back and pulled him up so that he was straddling his lap again. His white shirt swung forward as he came up to sitting, blooming with red as it slid over the bite marks.

His view of the blood spreading through the fabric of his shirt was blocked suddenly by the wine glass Gerard lifted up to his lips. He took a deep gulp from it, only realizing as he drank just how heavy his breathing really was. Gerard’s eyes were trained on him, pupils so wide now that the blue of his eyes was visible only as a thin disc around the deep black.

“How long are they, really?” Levi asked.

Gerard’s tongue darted out again, wetting his lower lip. He let the fangs slide out all the way down, a thumb’s width from the bottom of his chin. It was like watching one of those slow motion National Geographic videos of a snake rearing back to strike.

Levi watched, fascinated and horrified. He reached out, one finger extended, and slid it down the front of the fang. The texture reminded him of piano keys. He traced all the way down to the tip. Even just the light touch of his finger to the point sliced into his skin. Gerard’s tongue darted out to taste the blood, with a little hum of pleasure.

Levi brought the wine glass back to his mouth. He drained it and leaned backward, trusting Gerard to catch him and lower him down onto his back again.

Despite all the myriad vampire tales out there at the moment Sun Goes Down still managed to feel different to me. Gerard and Levi share a deep passion for one another, one which is shown very clearly in the experiences of this night. Gerard is in charge and Levi gives himself over to his lover, his master, completely. Lust, blood, need, and a whole lot of trust are all explored as the night progresses and both men are swept away on the tide of their emotions and physical sensations. Read this if you like your vampires dark, passionate, and hungry for each other. Fascinating!