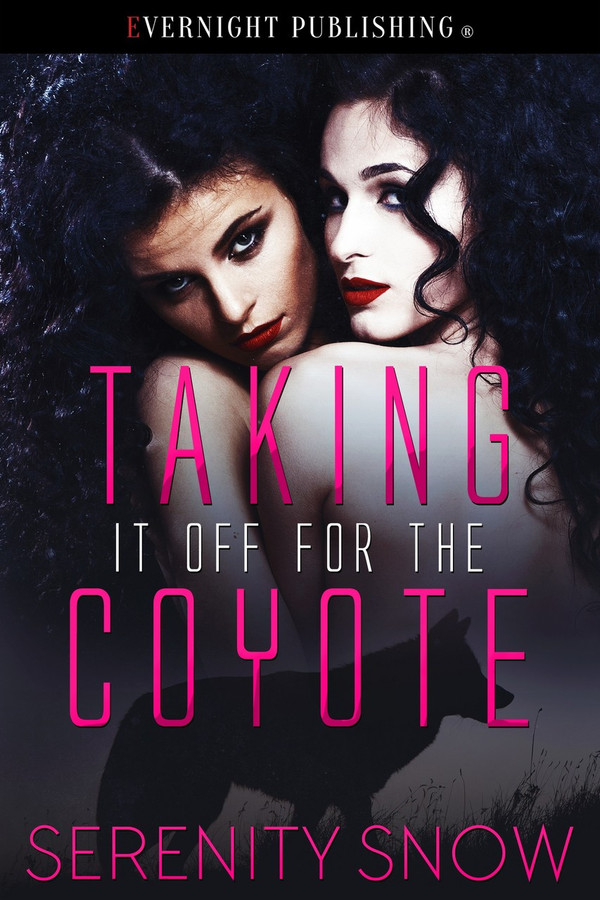 On the run from an ex-lover bent on enslaving her, Cambrie runs to Snow Fur hoping this will be the last place she’ll have to hide. She takes a job as a stripper at the infamous Coyote Closet and is immediately entranced by bouncer Sydney Spring.

Sydney doesn’t date the dancers, but there’s something about Cambrie she can’t resist. Still, she attempts to fight that pull of attraction because she knows her jealous nature could be deadly to any patron who dares touch Cambrie.

However, an attempt on Cambrie’s life forces Sydney to get closer to the dancer to protect her. And the heat between them burns her while the passion consumes her. Is the sizzling sex and seductive dancer a ploy to distract Sydney and her pack from the deadly plans their enemies have for them? Or is Cambrie just what she seems—a damsel in distress bent on claiming Sydney’s heart?

Sorrento’s presence here puzzled her pack’s alpha because most hyenas didn’t venture into cold climes for long. When they did it, was to put down some roots away from other hyenas so they could be top dog without competition. However, they wouldn’t be top dog with a strong wolf and coyote pack in the area.

“Any clues why they want to settle here?” Sydney asked, taking her eyes from the young woman at the bar who was smiling at something a female bartender was saying. The animal inside her, the coyote, growled low in ferocious anger, but she tamped the reaction down. She wasn’t quite comfortable with her strong reaction to the dancer who’d started dancing at the club a few weeks ago. And she still wasn’t sure how to handle her coyote’s hunger the sexy human.

“No.” He shook his head and turned back to the table. “Did hear something that might interest you though.”

“He’s not running the show alone, but I’m not sure who the partner is right now,” he said. “I’m working on it.”

“My source wouldn’t say,” he admitted with a frown. “I think he’s kind of afraid, but he did say four people inside your club are on Sorrento’s payroll just awaiting his orders.”

“Thanks.” She bent to take a shot and the scent of vanilla and arousal washed over her. A hand brushed her ass and the cue slipped just a little to the right causing her to miss the shot. Her companion chuckled and reached for his beer.

“See you around,” he said as Sydney looked up at him.

The wolf grinned and tipped his beer to her before moving on, and she turned to look down at the dancer. Her stage name was Baby Love, but her given name was Cambrie Canewater. The girl was cute as a newborn babe with those curious copper eyes, but she didn’t have the same claim to innocence Sydney was willing to bet.

“Hi.” Cambrie’s copper eyes were bright with humor that made her animal growl in greeting.

“You made me miss my shot,” Sydney grumbled and gripped the cue to keep from putting her hands on the little dancer’s compact body.

She often watched her at the club and craved her. However, she’d refused to ask her for a private dance. After all, emotional interest could become a distraction she could ill-afford. The girls counted on her to be fast, and focused in case a patron got out of line.

“I didn’t know you were into that kind of thing,” Cambrie murmured in a teasing tone and cast a glance in the direction the wolf had gone.

“What kind of thing is that?” Sydney reached for her own long neck bottle to take a pull of the cold brew.

Cambrie’s lips twitched and she moved to take up the abandoned cue. “Men.”

Sydney held Cambrie’s gaze. The other woman acted like she could read her mind and considered her a foregone conclusion. She was, and Sydney knew she was fighting a losing battle. They were going to end up in bed or against a wall or something. It was only a matter of time and place.

She ran her fingers through her dark brown hair and Cambrie’s eyes followed the action, her stare almost proprietary. Sydney fought the shiver and almost hated Cambrie for having such an effect on her. But no one made her hunger and ache like this woman did.

“Who I date isn’t your concern,” she said and the other woman shrugged, but there was heat and challenge in her copper depths. The coyote’s yip in her mind was a clear signal to the woman. She was tired of ignoring Cambrie.

“Buy me a drink then?” She asked leaning her hip against the table’s metal frame.

Sydney took another sip of beer. “What’s your poison?”

Cambrie shrugged. “You could be,” she said. “But in the meantime, I’m just having ginger ale.”

Sydney cocked a brow at her feeling the hunger for this woman increase threefold. “Then, let’s get you one.”

“I’ve seen you checking me out tonight.”

Sydney took another sip of her beer. “So?”

“So, ask me to dance,” she murmured. “Before someone else does.”

This story begins in a strip club for lesbians so it&#039;s quite a steamy read. It also has a ton of action, but it&#039;s real draw is in the romance between Syd and Cam. I highly recommend this novel (especially if you enjoy animal shifter stories).

Getting Nawty with the Coyote by Serenity Snow