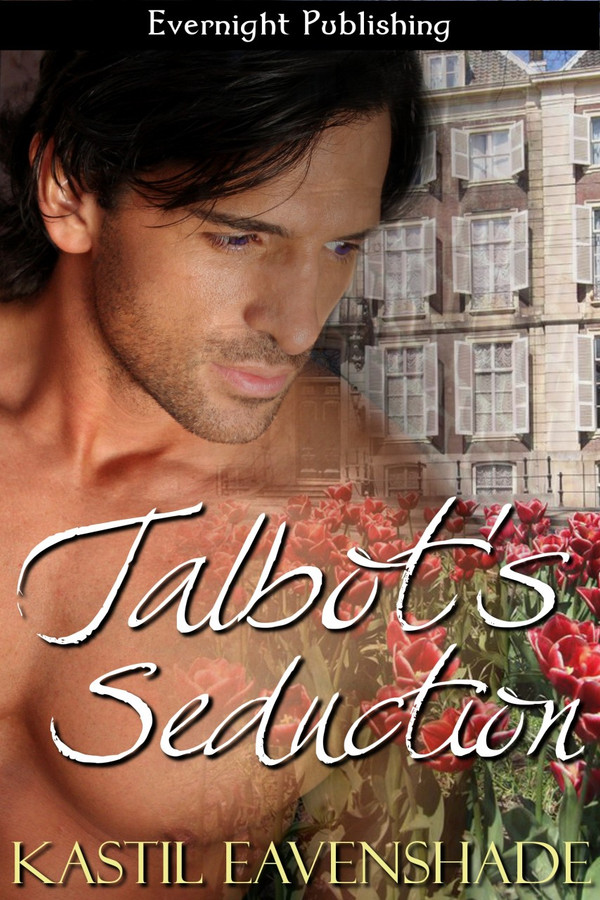 Talbot Sauvageot is a young Lord living in Paris, France, in search of anything but the duties of his station. He spends his time drinking and whoring, his memory of the last evening always a blur. When he is tricked by his betrothed’s father, Talbot realizes his heart beats not for the velvety folds of a woman but the hardened shaft of a man. Now he must find a balance in a world that condemns a man to death should he dabble in sodomy. His desires are unleashed tenfold when his Friend Tyeis shares his same interests in a bedmate.

His gaze wandered to the window, and he strode over. The scenery hadn't changed much. Frolicking in the pool below had turned into a festive event. Many more students—including Tyeis—dove into the crystal water. Clothes lay scattered on the marble tile surrounding the area. Talbot's cock stirred at the sight, and he stepped back.

Back in Paris, when his father treated him to a maison, Talbot had been unwilling to shed his clothes in front of Delphine. She had instructed him on pleasing a woman after their flight from her brothel, but he'd felt clumsy and awkward. She praised his skill, vowing to have her girls spread the word of his prowess. His trust in Delphine came with no reservations. Their need for secrecy was mutual.

His need grew in his breeches, and Talbot turned his parents’ picture face down. What he was about to partake in was the very reason his father took him to the maison over and over again. The heat rose in his cheeks as he peered out the window again, his eyes fixed on the majestic beauty of the chiseled specimens below.

Talbot's head hung low for the wicked images circling in his head but he couldn't deny his want. His manhood sprang out of his breeches as the laces unfurled. "Forgive me, Father," he murmured. His fingers grasped his throbbing member, sliding along the shaft. The more he honed in on the nakedness below, the thickness grew within his gliding palm. His forehead pressed against the glass as his breathing grew heavy. Heady illusions of his fellow brethren wrapping their lips around his girth excited him more. Talbot's scrotum contracted and the pressure built.

The click and turn of his door had Talbot scrambling to cover his erect cock. At full mast, its size could not be contained in his pants. He reached for the coverlet on the bed to mask his state. Perspiration ran down his cheeks, and his embarrassment grew.

Professuer LaVigne stood in the doorway. Without a word, he closed the door behind him and walked over to Talbot. He yanked away the blanket, and Talbot desperately tried to hide his engorged cock behind his hands.

"Monsieur, s'il vous plait." Talbot could not met his eyes nor tame his cock.

"Now or should I write your father on your behavior?"

As if touching an open flame, Talbot snatched away his hands. "I will not happen again, Professuer. I swear."

"I doubt that." LaVigne snorted. His finger thrust under Talbot's chin, forcing him to gaze into the eyes of his teacher. "Pray tell, Talbot, what was your inspiration for such acts?"

Talbot's eyes betrayed him, casting a glance over at the window. His chest seized, the fear of his lust being discovered chilling his skin.

LaVigne half-smiled and adjusted the front of Talbot's waistcoat before dancing his fingers lower. Talbot's eyes widened as his teacher stroked the underside of his hardened manhood.

"Your tastes are sinful, Talbot, and should you be caught, your parent's shame will be the last of your worries." LaVigne continued his deviation. "May I suggest you wait until night consumes the land for such indulgences and, if it pleases you, my door is open to relieve you of your guilt." He swiped the liquid from the purple tip and suckled it from his finger.

Talbot trembled, the shock of his teacher's bold actions unnerving him. LaVigne could never know his act quickened Talbot's breath.

"It is wrong," Talbot said, yet his cock did not agree with his words. He'd dabbled with an older man once before, and it ended in death for the Comte. He could not entertain that thought again.

"Only if one gets caught. Be careful, Talbot, and I will show you how to keep you and whatever lover you choose safe. Even in Paris." He reached into his jacket and pulled out a card. It fluttered onto Talbot's bed. LaVigne left, a smirk on his face.

Talbot shifted his shaft into his pants and laced them in haste. His hand wiped away the sweat still pouring from his brow. Far away from his home, Talbot shivered from his arousing encounter with LaVigne. His cock begged for release yet, and the temptation to seek out his teacher after dark called to him.

Talbot shook his head. He could not give in to his carnal lust. It was not the right of the world. His secret needed to be buried below, never to be acted upon again. He had left Paris behind but the sin he washed himself in followed close.

I enjoy all of Kastils Eavenshade work, would recomend it to anyone that would like to read erotica,and about the period of time this took place