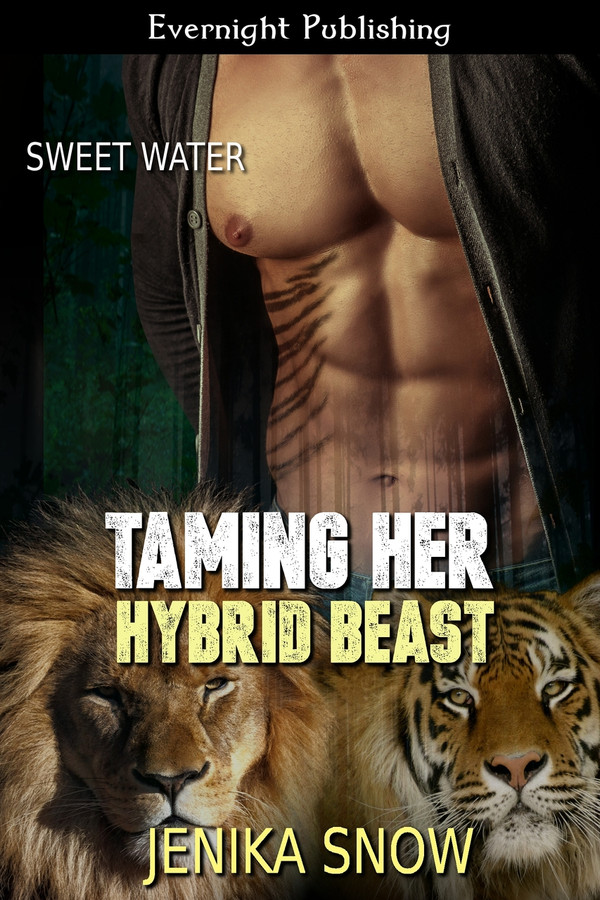 Roake Bishop is half lion, half tiger—a hybrid beast. He is more animal than human, but he relies on that to survive. After escaping from the depraved hands of a brotherhood that thinks mixed shifter species should be eradicated, he meets his mate.

Emma Leno, a clouded leopard shifter, runs a farm in Sweet Water with her brother. When an explosion rocks the small town, she finds her mate in the most unexpected place.

Being mates means the attraction between Emma and Roake is undeniable. He can’t stay away from her, no matter how dangerous he knows he is. But he wants revenge against the Purebred Brotherhood, and won’t stop until he exacts it.

Roake must decide if he can walk away from his mate. For the first time in his damaged life he realizes that revenge isn’t the only driving force to survive.

“God, what is happening to me, Roake?” she said and leaned her head back on the wall. She looked down the length of his chest, and he saw her gaze stop at the black tiger stripes that lined both of his sides. If she thought that was different, she hadn’t seen anything yet. When he shifted he was another animal altogether. But the only thing he smelled from her was her lust for him. When she reached down and touched his stripes that arousal scent intensified. She leaned in this time and ran her tongue along his bottom lip, and at the same time started working the button of his jeans undone.

“You’re surrendering to your mate, baby.” He grinned, but it wasn’t from pleasure. “We’re going to fuck, Emma. I’m going to fuck you.” He could have said it a little less harshly, could have tried to make her feel cherished and special, but he wasn’t that kind of man. He was going to give it to her the only way he knew how, and by the way she moaned and thrust out her breasts, which were barely restrained by her lace bra, he knew that was fine with her. Besides, it didn’t matter what he called what they were about to do, because in the end it was all the same: Roake claiming his mate and making it known she was his.

He slipped his hands beneath her ass, gripped her tiny panties that were nothing more than a strip of fabric, and ripped those motherfuckers in half. She was wet and smelled so fucking good. Roake stepped back only enough to grab her ankles. He lifted her legs and placed her heels on the bench she sat on. Her pussy spread open for him like a damn flower in the sun. Her clit was swollen, and he was going to make her scream before he slid his cock into her pussy. He slid his fingers through her slit and gathered her cream before bringing it to his mouth.

“Watch me, Emma,” he said deeply, but she was already staring right at him.

Half-lion, half-tiger, Roake Bishop finally escapes the depraved hands of the Brotherhood and finds his mate, Emma Leno a clouded leopard shifter, but feels he is far too damaged to keep her in this captivating erotic paranormal romance. A fast pace and smooth flowing plot captivates readers with suspense, excitement and passion. The well written scenes and details capture the imagination and the well-orchestrated suspense ensures that the reader wants to know the outcome of the strong compelling characters. Emma recognizes her mate as soon as she finds him and the attraction between them flares hot from every page. Even though their desires can’t be denied and erupt in some white hot and passionate sex scenes, Emma will have her work cut out for her convincing Roake that he does indeed deserve to have her. Roake captures the heart with what he’s been through and will outrage readers as they get caught up in his and Emma’s romance. The danger from the evil sadistic Brotherhood adds spice and excitement to the story and ensures that there is never a dull moment. I was completely caught up in the story, but I can’t help but feel that the story would have been even better if it had been longer.

I thought it was great how Emma and Roake met and also Jason and Annabelle. Emma was such a sweet person and Roake was not what he seemed. This was a fast paced story that was a quick read.

Yay!!! Back to Sweet Water. I have been wanting to revisit the town and all the people there for awhile. Thank you Jenika for writing such a hot and sexy book.

This is a great series! While you get a glimpse of other characters from the other books of this series, it doesn&#039;t overpower the main story. I love Emma and Roake! They are two people from completely different ends of the spectrum but somehow they make it work! This is a must read!

I really loved all the characters. Sometimes the story was choppy with all the point of views going on though. But, Roake and Annabelle were beautiful, damaged, lonely shifters who thought they were to broken to be loved. Emma and Jason were great nurturers who wanted to love their mates back to happiness. I really enjoyed the story and found the plot wonderfully weaved with romance. Taming Her Hybrid Beast is a fantastic shifter story that will make you fall in love with Jenika Snow’s Sweet Water Series!

You did it again Jenika Snow! I ABSOLUTELY adored this book! Roake and Emma are perfect. The sex is incredible between the two! This is one of my favorites! Thank you for continuing the Sweet Water series!!!

I loved it !!! After Declan and Melissa&#039;s story I was afraid that was the end of the Sweet Water series. Let me just say I am so very happy to be proven wrong. A great addition to this awesome series. I don&#039;t want to give any spoilers so I will say this WOW!! Action, suspense, revenge, acceptance, tears (for me yes I&#039;m a dork *wink*) sexy times and love.....*happy sigh* Thank you Jenika Snow for continuing this series (it&#039;s my favorite). Looking forward to the next one.