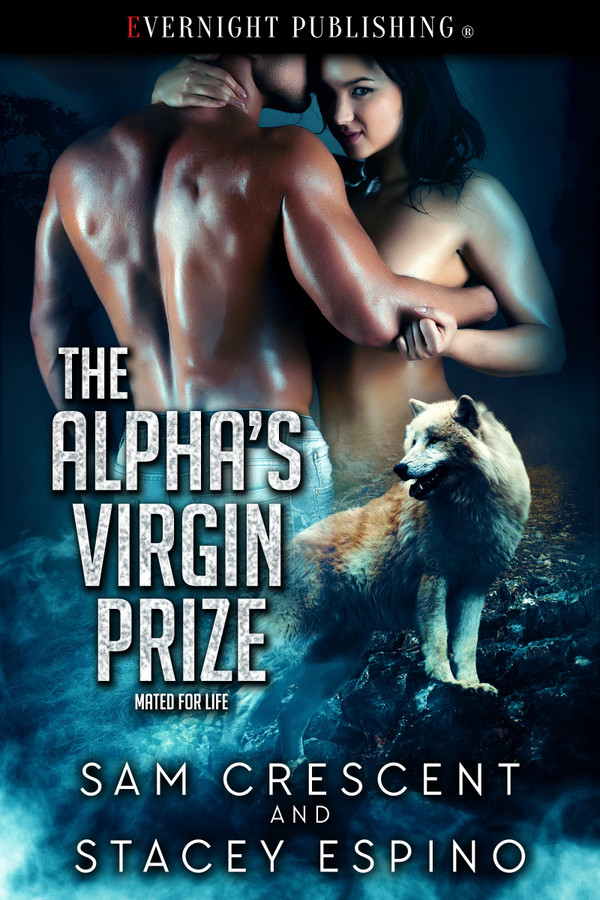 Bethany's used to being invisible to men ... until Caleb walks into her diner.

He's nothing like the other woodsmen in their small town—he's solid muscle and has an intensity in his eyes that takes her breath away. And for some reason he believes they're meant for each other. Who is she to complain?

Caleb nearly gave up on the mating call. After turning forty without a mate, Bethany's scent takes him by surprise. Now he has to convince a human to believe in werewolves while battling an encroaching bear sleuth with his pack. First he has to brush up on human dating customs, which isn't easy for a man who's spent most of his life as a wolf.

Once Caleb claims his woman, the other men in his pack are free to find their own mates. It sounds simple enough, but convincing the curvy waitress he wants her for more than one night proves more difficult than he expected.

“Don’t be skittish. I won’t hurt you, Bethany.”

He spoke her name slowly, deliciously. “I don’t know you.”

Although she could envision numerous X-rated scenarios with Caleb, she was completely inexperienced when it came to men and didn’t know where to start. One of her lifelong fears was being dumped and rejected, so guys looking for a one-night stand were not her type. No matter how irresistible. She wouldn’t be able to handle the emotional aftermath.

Caleb raised an eyebrow. “I saved your life. Or don’t you remember?”

She couldn’t help but smile. “Right. How could I forget.”

The entire world faded away, leaving just the two of them, the lone light from the diner and a connection she hoped wasn’t one-sided. He looked into her eyes like she was something special, and she started to believe it. It was a high she’d never experienced. Maybe the whole love-at-first-sight thing wasn’t so farfetched because, right now, she felt like fate had brought them together.

“Let me buy you jewels.”

Bethany snorted then stopped herself when he didn’t laugh along. His shoulders were squared, his jaw strong. The man was serious.

“Is that how men around here flirt?” Maybe it was. This town was so far off the grid, it was nothing like she’d ever experienced.

“Sorry, I meant, let me date you. I haven’t stopped thinking about you since I had you in my arms.”

She wouldn’t waste a chance to date a man like Caleb. He was raw, untapped masculinity. He probably had no clue how beautiful he was. She hated the conceited pretty boys in the city.

“Well, a second date. I considered the coffee you bought me to be the first one.” Now he smirked, a barely-there smirk, but it made her pussy clench. Something devilish swirled in those gray eyes, and she hoped she was making the right decision.

“I can see that.” She bit her bottom lip, impossibly attracted to this man.

“Why is that surprising?”

Bethany would probably embarrass herself at some point if they went on a date. Better for him to see what he was getting into before they made plans. “Well, you’re like a nine and I’m more like a three.”

He narrowed his eyes. “A nine and a three…”

She waited for him to say something, preferably to make her feel better. It seemed to take forever until he spoke again.

She couldn’t help but giggle, trying her best not to let it out. This town was something else. It was refreshing to be around a down-to-earth man not tainted by the world.

“I mean you’re a nine out of ten, and I’m a three out of ten. You could do a lot better, so I can’t help but feel suspicious.”

“In that case, you’re a ten out of ten, Bethany. I’ve never seen a woman more beautiful or desirable in my forty years. I’ll do everything in my power to make this work.”

Her breath caught. She’d been good at gauging fake people in her life, and he sounded sincere. Should she mention the huge age gap? She wouldn’t offer that she was only twenty-five just yet.

A delightful story of love

I found this love story hilarious and scary suspenseful but it was a read that I could not put down. Ms. Crescent had me when she had Caleb&#039;s pack mates teasing him about finding a woman so they could find their women. He just wanted to take his time and find the woman of his dreams. Bethany being shy and always feeling unwanted felt a zing when she looked at Caleb and not to mention his wolf went crazy because he knew they had found their lady. Joe just had to bring the drama and the killer into their quiet mist. Can&#039;t believe that some shifters can become rogues if they don&#039;t find their mates and then ones that just want to hunt and kill are just dangerous. I now know who the badazz in the forest is now. Caleb and Bethany were hot and cold because they were new to this relationship thing and I can totally relate to Bethany why give heart and soul to someone who may leave you. Caleb how does a shifter woo a woman when he is more than human. I loved this paranormal love story and I would read it again.

Such an amazing series starter by two of my favorite authors. I love how they made their characters so real, with insecurities and mistakes. Caleb might be the alphas alpha, but that doesn’t mean he is prepared for the dating world. It was fun watching these two navigate the getting to know you waters, all while dealing with the danger only a rouge presents. I enjoyed the way the pack dynamics changed throughout the book and I really can’t wait to see what these crazy wolves and bears get up to next. With this writing duo you just know it’s going to be smoking.

I really enjoyed the first book in this new series by Sam Crescent and Stacey Espino. Caleb is the Alpha is his small pack and the other 3 members of the pack can&#039;t find their mate until he does. When they drag him to town, he finds her and it should be easy, right? Wrong!!! Bethany is new and knows nothing about shifters. The story was really, really good and I ended up reading it in one afternoon. The connection between Caleb and Bethany is strong and you can feel the emotions coming from them. But something is wrong and there is danger lurking in the woods. Danger that is coming after Bethany while leaving death in it&#039;s wake. Can Caleb, Brian, David and Reese protect Bethany and also get rid of the danger? And where does Bethany&#039;s boss, Joe, fit in all of this? Loved it and I can&#039;t wait to read the stories of the other guys!!!