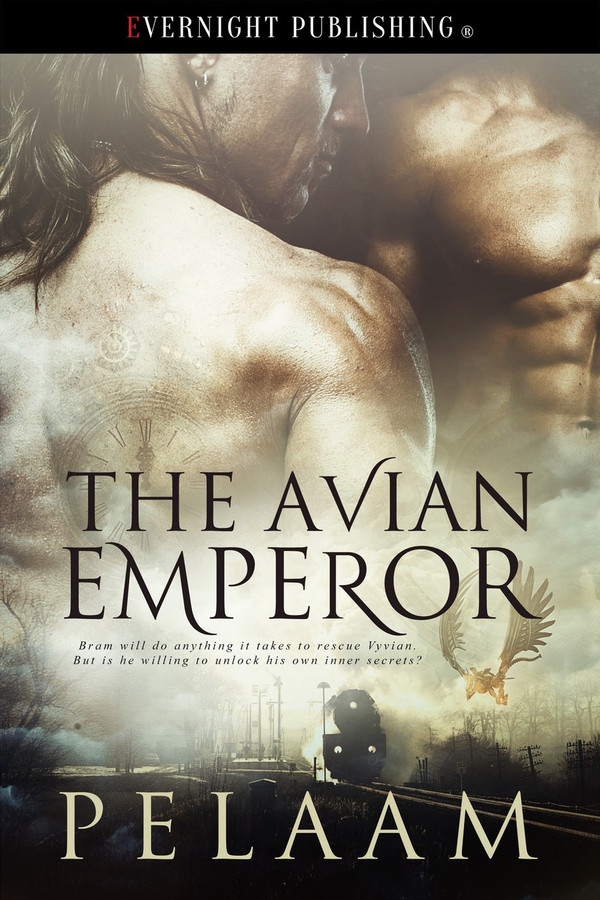 Pinkerton man Bram McCabe likes to work alone. But when a madman titling himself the Avian Emperor threatens the world's skies, he's forced to work with an English team already on the case.

Things go from bad to worse for Bram when he takes more than a professional interest in Vyvian—a man with a secretive past. Each man dances around the other, hiding their true feelings, knowing they live in very different worlds.

The Avian Emperor is as cunning and lethal as he is intelligent and when he kidnaps Vyvian, Bram holds the key to finding him. Bram will do anything it takes to rescue Vyvian. But is he willing to unlock his own inner secrets?

"I doubt I could drink any more," Vyvian whispered against Bram's lips as they eased apart.

"Then come to bed with me?" Bram murmured, keeping his voice soft.

Taking Vyvian's hand in his, Bram led him to the bedroom. Tueri flew from Vyvian's lapel to settle on the bedside table and Vyvian laughed softly. "He doesn't like sleeping far from me."

Bram laughed with him, although slightly puzzled at the way Vyvian spoke of the dragon. It's only a mechanical when all's said and done. Then everything but the man before him was pushed aside.

His coat was already draped on a chair and his vest followed, and Bram found himself unable to tear his gaze away from each portion of pale smooth skin revealed as Vyvian unbuttoned his shirt.

As Vyvian shrugged out of the garment, Bram played catch up with fumbling fingers. Glad he'd already removed his jacket in the lounge, Bram wrestled his way out of his vest and yanked his shirt off over his head after unfastening just a few buttons.

Ducking his head slightly, Vyvian glanced up at Bram as he touched the waistband of his pants.

He's shy. My turn to lead the way. Smiling reassuringly, Bram unbuttoned his pants, letting them fall to the floor and shaking them from each foot. He took the two steps necessary to sit on the bed and undo his boots. They and his socks came off next, leaving him in just his drawers. With a wink, he shoved them down, revealing his erect cock.

A soft gasp escaped Vyvian, his gaze riveted to Bram's dick. Bram stroked it slowly with his right hand. "Take your time. I'm enjoying the view."

A red flush crept over Vyvian's cheeks. He moved to the chair and removed his trousers before sitting to remove his boots and socks, and then stood to push down his drawers.

Still stroking his dick, Bram bit back a groan at the sight of Vyvian naked and hard. However, his cock had no such worries at showing its appreciation, a surge of his juices dribbled free, slicking his organ, enabling Bram to speed up his movements.

Releasing his cock, Bram rose to his feet and moved over toward Vyvian. He held out his left hand. "Join me?"

Nodding, Vyvian accepted Bram's hand and they approached the bed together. Before getting on the bed, Bram drew Vyvian into a gentle kiss. "We only do as much as you are comfortable with. You tell me to stop at any time and I will. You have my promise on it."

A choked sound broke free from Vyvian and he framed Bram's face in his hands, kissing him repeatedly. Then he lay down, holding out his arms to Bram. "I want to feel you."

This is a highly entertaining, wonderfully funny yet action-packed Steampunk version of James Bond – except the principal agent is from this world’s version of the US, rather than the “traditional” UK. Well, and the secret and other agencies all have different names, but that is par for the course when considering this novel is set in a fantasy world where everything is powered by steam, mechanical “automatons” are the prevailing custom for anything machine-like, and great big airships are the primary mode of long-distance and cross-ocean transportation. And in this book, it is these airships that have come under attack by a mysterious and evil man who supposedly loves birds and calls himself the Avian Emperor. Bram is a great agent – he is very successful, a total player, more than a little arrogant, and a loner. He does not like working with others, so when his boss reveals his latest assignment, Bram is not happy to hear that he will be part of a team. Of course he resolves to ignore all of them and do as he pleases – not that this determination lasts very long. As he meets each of his new, if temporary, colleagues, Bram begins to understand their talents and, considering the seriousness of the escalating threat they face, the benefits of working with backup become evident. Even to Bram! Vyvian is a man with a secretive past, a steely determination to overcome the issues he has faced, and a dedicated member of Cyrus’s team. He is also a talented inventor and has built a little steam-driven dragon who accompanies him everywhere and acts more like a pet than a machine. As it turns out, there is a reason for that – not that I can tell you because it would be a spoiler. Vyvian wants to do his bit in chasing the Avian Emperor, as part of the team he loves to work with, but the “intruder” from across the Atlantic is an annoying distraction and doesn’t seem to want to play by the rules. Bram and Vyvian are not off to a good start. While Bram seems out to seduce him, Vyvian wants to focus on their task, and anyway, he knows Bram is a playboy, and he is not interested in being a fling. Bram is baffled by his quickly growing feelings of attachment, but sees no reason to fight them. Vyvian, on the other hand, has no need to trust the almost-stranger. It was easy to see why these two men would struggle. But their relationship begins to improve as they have to work together, face the constant threat of another attack from their joint enemy, and slowly build trust while they work on catching the criminal mastermind. It’s an excellent slow burn that soon explodes into incendiary heat, well paced to increase in step with the growing suspense and breakneck action. If you like spy stories of a different kind, if you appreciate humor in your action/adventure stories, and if you’re looking for a read that is as likely to make you laugh as it is to make you bite your nails, then you will probably like this novel as much as I do. It’s a great example of an imaginary alternate reality with lots of wonderful little details that make it stand apart from our world.