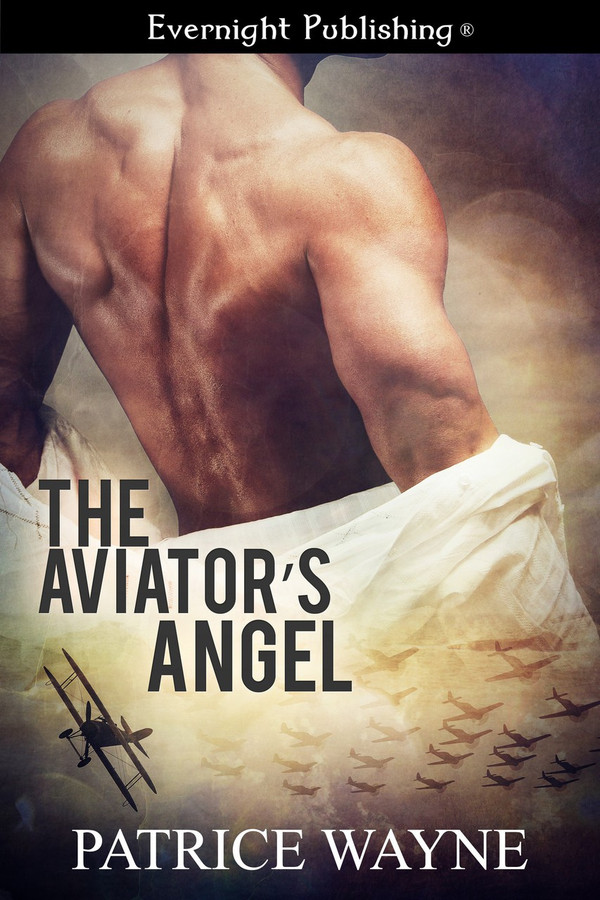 When Lorraine Ryan decided she wanted to pursue her long standing dream of flight, she sashayed out onto the local air strip in 1925. Although most of the fellows heckled her, Guy Richter, a former World War I flying ace, offers to teach her. He nicknames her "Angel" and before long she's flying with Guy.

The two are also falling deep in love but Guy is a haunted man. His demons include his war service, the death of his only brother in an accident the previous year, and the Valkyries that he evaded in France who trail him in the hopes that they can complete his destiny.

Set against the backdrop of the Roaring Twenties in St. Joseph, Missouri, Guy and Angel struggle to enjoy life, each other, and to find a way through his personal hell for a happily ever after life together.

Guy sat sipping his third cup of coffee, his galluses hanging down, so after she finished the dishes, Angel slipped behind him and put her hands on his shoulders. She ran one hand through his hair, ruffling his curls.

“That feels nice,” he said, and added, “Scratch my back, would you? Just watch over on the right. I think I got a piece of shrapnel coming up.”

Delighted he felt the same comfortable intimacy she did and shared the sense this was their house, a safe place, Angel raked her nails up and down over his back. His burn scars stood out, sharp and obvious, the white-ridged flesh stark against the unblemished part of his skin. She rolled up his A-shirt the rest of the way to find the place where one sharp edge of a tiny scrap of metal poked through the skin. She knew better than to touch it.

“I see it,” she said. “I wish I could just pull it out for you. Maybe I could put some drawing salve on it.”

He grunted but not in an unpleasant way. “It’s all right. Just scratch a little more.”

She obliged him, and after a few minutes she put her head down on his shoulder. Angel enjoyed the feel of his solid flesh beneath her and rested there for a few more moments, savoring it. She inhaled the fresh, clean scent of the soap he washed up with and the bay rum he must have splashed on after shaving.

“Whatcha doing, doll?” he asked, his voice thick with contentment.

“I was thinking how much I love you,” she said without any attempt to be coy. “You know?”

“Yeah.” His voice softened until it sounded like velvet to her ears. “I do know, Angel, because I love you, too. Come sit on my lap, baby girl.”

Guy scooted back the chair to make room, and she came around to settle down on his lap. His arms encircled her, and she relaxed into them, letting him hold her. He could’ve kissed her but he held back, and she didn’t mind. The embrace made her feel good within, almost holy, and it reminded her of the way she felt right before Communion if she paid attention during Mass. It warmed her, and yet it sent shivers of anticipation down her spine along with a sense of belonging. Maybe he felt the same, she didn’t know for sure, but he liked it. That much she couldn’t doubt at all.

When he did get around to kissing her, it tasted sweet, his lips warmed by the coffee, and she responded, her body charging to his touch. Angel savored the feel of his mouth over hers, his roaming tongue darting into her mouth, and started feeling a now familiar prickling rush of something imminent in the air. Just when she got into the mood, Guy drew back.

“I ain’t going to do it in your ma’s kitchen,” he said. His tone was light, but she could tell he meant it. “That wouldn’t be right and on her birthday to boot. We need to skedaddle anyway. We got stuff to do.”

“Like what?” She knew they couldn’t fly, so she wondered what he had in mind.

“You said you’d bake your ma a cake, right?”

“So I thought we could do one better and make her an entire dinner, really put on the Ritz. What do you think?”

Angel thought it was just about the most sentimental and kind thing she’d ever heard, but she teased him instead of saying so. “I think you’re sweet on my mama.”

“You don’t need to be, kid. I do like your ma, though. So what’s her favorite thing in the world to eat?”

She had to think about that ‘cause Mama usually bought what was cheap or on sale, then made something that tasted good from what she got. “I think she likes a big, fat, roast chicken and dumplings.”

“If I buy the fixings, can you cook it?”

Angel looked straight into his eyes. “I can cook anything, mister. I’ve been cooking since I was about eight, I think. Don’t let the flapper look fool you.”

“Is that banana oil, or do you mean it?”

“It’s the truth!” She didn’t know if she should be mad or proud.

Guy shifted her onto one knee and bussed her hard, quick.

“Then tell me why you never cooked me anything?”

“What do you call the toast and eggs you ate, flyboy?”

Guy smiled until the corners of both eyes crinkled with mirth. “Breakfast.”

Angel giggled. She might not be able to name it, but she understood their banter offered an outlet for their sexual tension. In any other location, they’d have been locked in the most intimate embrace possible, but their teasing vented the heat radiating between them.

“All right, all right,” she said when she could breathe again. “So we’re having a big supper party for Mama, and you’re buying the goods?”

“That’s about the size of it. Get a list made, and we’ll go do some grocery buying.”

By the time she found a stub of a pencil and a scrap of paper, then made a list, Guy’s shirt dried, so he changed out of her brother's. Outside, the rain slacked before it stopped altogether. As they got into his old car, the sun peaked through some clouds with radiant beauty, and Angel saw a glimmer of color streaking the sky.

He nodded. “It’s a promise things will just keep getting better.”

“Have things been so bad?” she asked, curious.

Guy turned to her with everything he felt written on his face. “They were, right up till the day I met you.”

She scooted across the seat so she could sit close to him, and they were off.