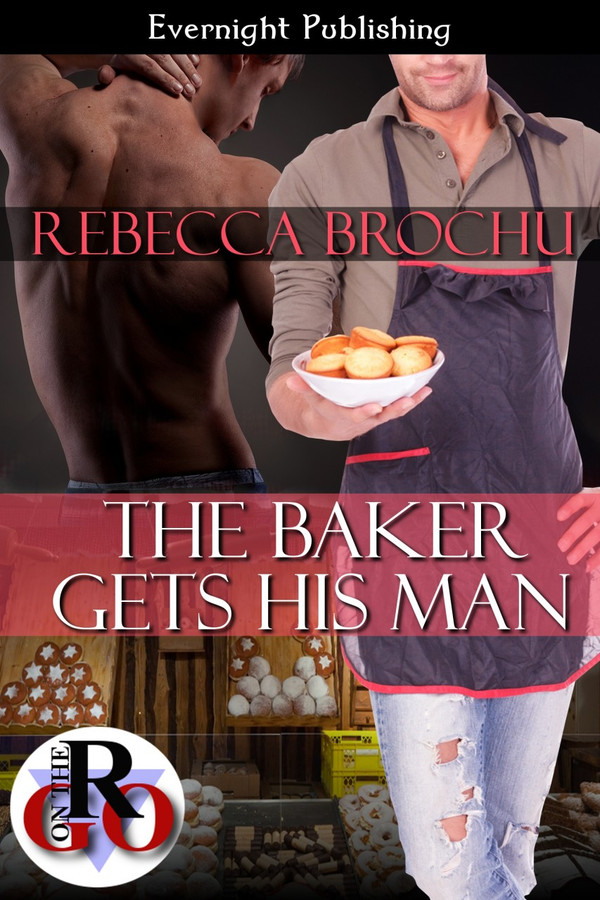 Jacob Stine, one of the owners of the town’s bakery, has wanted Race Carroway since the moment they first met.  Despite the obvious tension between them, he’d always assumed that the hunky mechanic would never be interested in him.  Jacob had resigned himself to admiring Race from a distance until the day he’s forced to call him for help.

When the encounter turns steamy and then abruptly ends, Jacob is torn between hurt and confusion.  He has to make the decision between finally moving on and trusting Race with one more chance.  Will the baker have what it takes to get his man?

He was aware of the way Race’s long fingers wrapped around the steering wheel and how the muscles in his arm bunched when he shifted gears.  The cab of the truck smelt like sweat and grease and a hint of the spicy cologne Race wore.  Normally the combination would smell unpleasant, but it only reminded Jacob of days spent staring out the bakery window and watching as Race pulled himself, sweaty and disheveled, from underneath whatever vehicle he was working on.  Jacob had always imagined what it would be like to make his way into the garage at night when Race was working late, to find him laid out on the creeper wrist deep in the undercarriage of some car or truck.  To kneel on the cold concrete floor, unzip the fly of Race’s worn jeans, pull his cock out and swallow it down.

Jacob had spent more than one night, alone in his bed, hand fisted around his own cock as he imagined the choked off sounds of surprise Race would make as he sucked him off nice and slow.  He tried to shake the thought off, tried not to get caught up in the fantasy when Race was only inches away from him, but it proved harder to do than he’d ever imagined.

By the time Jacob saw his driveway in the distance he was half hard and sweating lightly, desperate to get out of the truck before he did something he’d regret.  Something like reach for the tab of Race’s jeans even though he was almost certain that Race wouldn’t welcome the gesture.  He was already reaching for his seatbelt as Race pulled into his driveway, but Race clamped a hand down on his shoulder and stopped him from leaping out of the truck.

Jacob Stine hasn’t hid the fact he’s attracted to Race Carroway, and when Jacob takes his van to Race’s shop for repair, Race takes Jacob in hand, showing Jacob that the attraction is mutual. Great, right? But before Jacob can get his hands on Race, Race runs away then ignores him; making Jacob think Race regretted their one-sided, hot encounter. Honestly, The Baker Gets His Man, seemed rushed more than it needed to be, regardless of the fact it is a short story. While reading, at least for me, I like to be drawn into the heat building between the characters. Jacob and Race’s first sexual encounter didn’t have that build up, rather a wham bam moment at the beginning. Along with the quickie start to the lovers, there were a few run-on sentences, and repeated words that should have been caught in the editing. There’s no denying that the sex scenes sizzle, and I liked the overall concept of the story that Ms. Brochu brought to life on the page. Yes, I thought there may be a few issues, but not enough to overlook the short story as a whole. If you are looking for a quick read with some m/m heat, I would recommend this book.

THE BAKER GETS HIS MAN has charming leads and a light romance with good eroticism. I wish it had been a little longer or novella one in a series but it&#039;s still very enjoyable. Jacob lusts after his mechanic neighbor, Race, from the windows of his bakery. When Jacob&#039;s bakery van breaks down one night and he calls Race, their relationship changes in ways Race may not be comfortable with. The author did a good job of developing Jacob and Race as complete characters even in a novella. Race is a bit more mysterious than Jacob but still a strong character. Jacob is the novella charmer for me. I love how he calls Race on his running away from Jacob and refuses to be in a relationship that isn&#039;t a sure bet. But Jacob does this with respect for Race that made it work perfectly for me. The eroticism doesn&#039;t overpower Jacob and Race&#039;s emotional intimacy which I thought was great. The novella starts when the men&#039;s relationship is on the cusp of a change so the deepening emotional intimacy matches the sexual intimacy. This combined to make a very enjoyable read. THE BAKER GETS HIS MAN was a very good read but I do wish the men had the big emotional reveal. I hope this will be book one in a series so I get the full relationship closure, but even if not, it&#039;s well worth reading.

If I had to describe The Baker Gets His Man in a few words, it would be: A sweet, sexy, bite-sized confectionary romance. Jacob yearns after Race, even ensuring there are pumpkin-flavoured goodies in his shop for Race, but lacks the courage to go after the sexy mechanic. When his car breaks down, he’s forced to call Race for help. Sitting in such close proximity to the man of his lust-laden dreams, Jacob is increasing aroused. So when Race touches him, he groans which seems to unleash Race. Given the blowjob of his life, Jacob is stunned when Race then apologies, and runs away. Jacob intends to speak to Race the next day, but it’s several days of angst for Jacob before Race appears back at his shop. When Race comes over to the bakery and says he’s sorry for what happened, Jacob is furious. However, when Race confesses how much he wants Jacob, he’s given a second chance. One that Race takes full advantage of. The sex between the guys is hot, and the baker gets his man! If you’re looking for short, sweet, and sexy, this is for you.