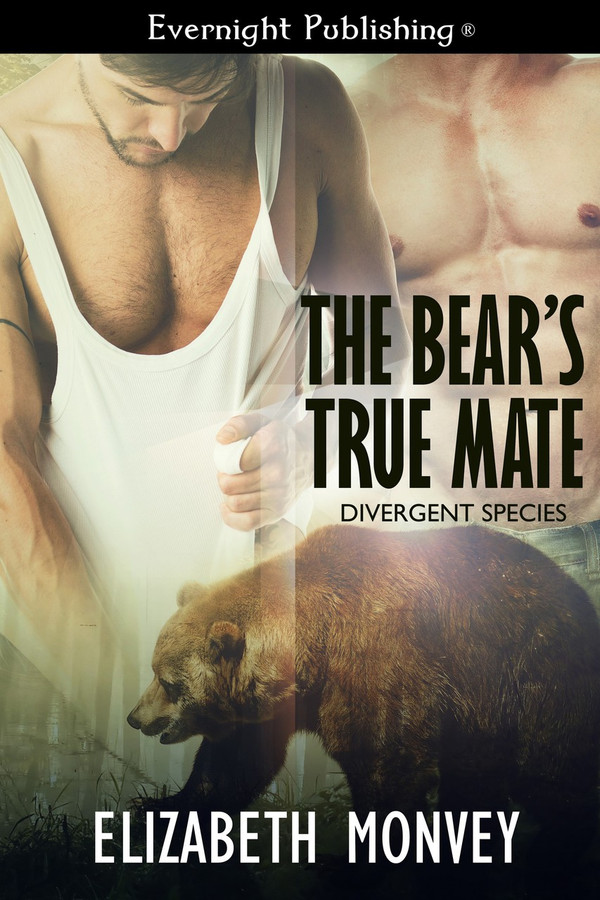 Henry McBane had a wife.  And a true mate.  And they weren’t the same person.  He once made a terrible mistake and it cost him everything.  When he found his wife dead from a group of shifter hunters, he gets work as an enforcer for the Shifter Council in order to bring the hunting club down.

Ajay Orbin has been a prisoner for months, trapped with others as living science projects and held at the whim of a horrible scientist.  When he’s finally rescued, he can’t believe it’s by the man he once loved with his whole heart.

Can he find it in himself to forgive Henry?  And what happens when he finds himself…pregnant?

They stared at one another, and Henry had the impression of free falling. His stomach flip-flopped, his dick hardened, and his bear prowled restlessly under his skin. Slowly, he lowered his head. Much to his surprise, and happiness, Ajay didn’t pull away, even though Henry gave him plenty of time to turn away.

He placed his mouth lightly against Ajay’s, trying desperately not to grab him. All Henry wanted to do was sweep his mate up and never let go. Bury himself in Ajay’s body until his bear was sated and the mating drive had been settled. Right now, the mating pheromones were raging out of control, and it took everything human in Henry to hold back his bear.

He was shocked when Ajay took the kiss to the next level, grabbing hold of his shirt and pulling Henry close. Henry swiped his tongue over the seam of Ajay’s mouth and immediately, Ajay opened up. Their tongues met, danced, twining together to relearn the feel and texture. Before it had all been too rushed, too overpowering. Guilt had been the defining emotion in Henry’s heart. Now, however, it was time to rebuild what they’d briefly had before the foundation had been blown to smithereens. In seconds, passion flared between them, flaring so bright that Henry thought he might burn alive. His cock pressed painfully against his zipper and all he wanted to do was tear their clothes off and sink into Ajay’s tight heat.

The kiss broke and Henry leaned his forehead against Ajay’s, breathing heavily. His bear growled in his head, wanting more, but Henry knew he’d have to be content for now. At least until he and Ajay talked further.

Mpreg lovers, this is the book for you. I picked this book up because I enjoy m/m shifter books that ends up with a male getting knocked up. I thought this book was going to be more on the light side, but it is darker than expected and this works out better for me. Ms. Monvey is a new-to-me author and I&#039;m interested in reading more from her. Henry McBane was once happily married with another shifter. He and his wife enjoy a good life and they check off most of what is expected as a married couple. Life throws Henry a curve ball when he finds his soul mate and it is not his wife, June. Instead, it is a male bear shifter, Ajay. Ms. Monvey does a nice job of setting up a relationship conflict that is revealed half way through the book. With the start of the book focusing on Ajay&#039;s imprisonment by a sadistic and unethical doctor, it pulls a reader in. As the story unfolds, it is easy to see this is more a character-driven book. This works out well because the star-crossed lover theme between Henry and Ajay is well thought out. The conflicts and resolution are lose-lose situations yet end up with a happily ever after. This takes skill. Henry and Ajay are both very likeable characters. Neither one is perfect. Sometimes, people are in the right place at the wrong time. The second chance they have is fraught with unknowns and danger. The two of them together is rather sweet and provides the ray of hope which balances out the dark undercurrent of this tale. For a layman with no medical knowledge, the mpreg situation is explained in a way that is believable for me. I&#039;m sold! This is the humourous piece which also helps lighten the dire predicament the shifters find themselves in. After reading this book, I eagerly look forward to the next book in this series. There are questions I want answered. The hints in this book set up for what may be another dark tale. Recommended for m/m paranormal romance readers with a fetish for pregnant males. - See more at: http://glbt.theromancereviews.com/viewbooksreview.php?bookid=19589#sthash.x0uJ5yc2.dpuf

Turns out that humans aren’t the only ones who do stupid things when given the choice between the perfect mate (who happens to be the same sex) and a mate they can have children with. It’s not something seen often in shifter books, but it makes for an interesting “what if” story. And with the way the author has set up this world, where shifters are not known to exist except by a group of cruel hunters and scientists without a conscience, this “what if” turns out to be a lot more complicated than I expected. Henry is a bear shifter and, as it turns out, he made a horrible mistake when he turned away his fated mate, bear shifter Ajay. Henry had decided he needed a wife so he could have cubs. In a cruel twist of fate his wife is killed by the hunters and Henry ends up running into Ajay again. But does he talk to the man? Of course not! Well, not at first, and when he does, Ajay is less than receptive. Plus Henry has to deal with feeling guilty with going on with his life while his wife is dead. Henry has just begun to deal with most of it when the big shock has him and Ajay reeling. Ajay may be many things but he is not a cheater. When Henry frees him after many months in some scientist’s lab, Ajay has no idea Henry’s wife is dead. So when Henry tries to kiss him, Ajay pushes him away and ignores him. Then he finds out Henry’s wife has died – but while that opens up the possibility of a relationship, it doesn’t mean he can just forget that Henry lied to him about being married and didn’t follow the mating bond once before. The whole situation might have ended in a stalemate if Ajay hadn’t found out he is pregnant. It’s something that isn’t supposed to be possible and it definitely makes both Ajay and Henry reevaluate their options. If you like shifter worlds with unexpected twists and turns, if fated mates being rejected only to find out they can be with their destined partner after all piques your interest, and if you’re looking for a short, hot read that is part of a series and a longer story arc, then you might like this novella. This slightly different approach to male pregnancy certainly has me curious.

I enjoyed this short story even though the story was a little choppy at times it still kept me entertained. Ajay is a man that has to deal with being a hostage for an evil scientists with no compassion. His only hope are his two friends that keep him going. Henry is seeking revenge on the people who murdered his wife, what he doesn’t expect is to see his true mate. A mate he hurt when they first met with lies… Like always lies have a way of making things complicated and leaving all parties in pain. Hurt feelings can lead to even more difficult situations. The author did a good job giving us well rounded characters. The only issue I I had was the lack of resolution with some of the characters. I give this book 4 diamonds and hope that the author will continue to develop this world…

I almost didn’t read this book because I’d previously read a shifter mpreg book by Elizabeth Monvey and wasn’t overly impressed. I am so glad I gave this one a chance because I thoroughly enjoyed it. The Bear’s True Mate handles mpreg in a way different than any other book has before. It provides an explanation of how the impregnation happens instead of just blaming it on mother nature or whatever. Here the MC gets pregnant because of experimentation while being held captive. The book starts with bear shifter Ajay being held with multiple other species of shifters. An evil lady is experimenting on them but they don’t know why. They’re all held for some time before being rescued by several men out to take down the organization hunting down shifters. Among the rescuers is Henry McBane who also happens to be Ajay’s true mate. What was really cool with this story is that this isn’t insta-love situation where they just immediately end up in each other’s arms. In fact, Ajay and Henry have already met—when Henry was married. There’s a fair amount of bitterness in Ajay because of what happened in the past and at first he wants nothing to do with Henry. Henry is willing to oblige, even though his wife is dead, until an odd sickness strikes Ajay. The two have a convo about the dead wife and Ajay is unable to stay away from Henry, even though he’s still angry about being lied to. But they go at it like bunnies, or bears if you will, but things still aren’t perfect. Ajay’s pregnancy shocks them all and the evil lady’s return puts Ajay in danger. I loved the resolution to the danger as well as the relationship. It’s also perfectly set up for future books in the series starring the other men held captive with Ajay. A fun read for sure.

Action-packed start, lots of tension and angst. Ajay was captured and experimented on. His rescuer is his true mate and the man he can&#039;t have. It nearly broken him when he had to walk away, but Henry had a wife. Now, things of changed. Can he get past his anger? Henry helplessly watches his mate struggle and nearly die. He wants his second chance to get it right. The story is compelling. The consequences of cheating were dealt with. Fast and passionate fated mates story.