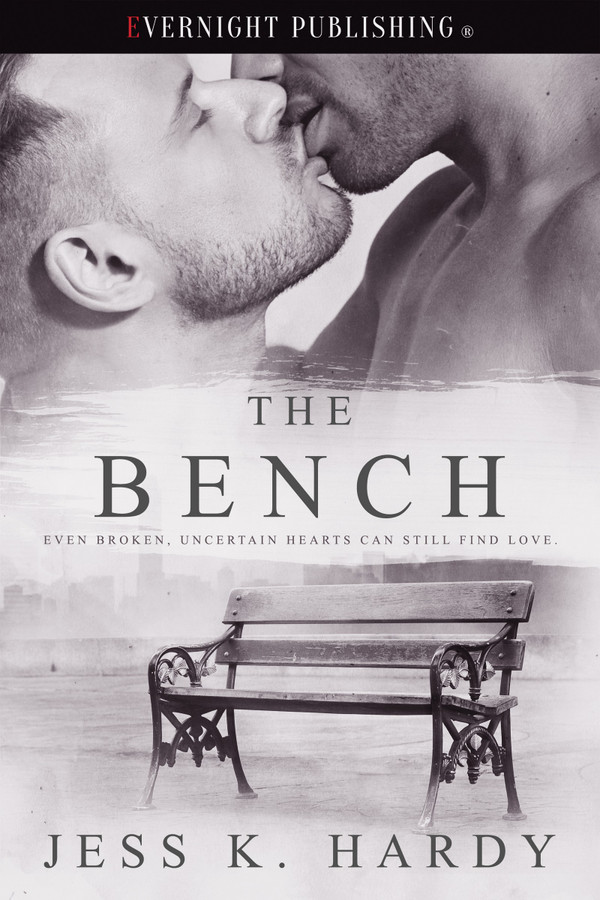 Public defender James has been in self-imposed dating jail since his divorce, but Noah, the gorgeous dad he met at the playground, has him considering parole. Their kids are best friends, they have a lot in common, and they’re both single. It’s almost too perfect, except for one tiny detail: Noah is straight.

City planner Noah’s terrible year started when his wife left him for their twenty-year-old neighbor. Ever since he met James though, things have been looking up. James is smart and kind and now Noah—whose only romantic experience with men was a brain-scrambling spin-the-bottle kiss in high-school—is utterly confused because he can’t stop thinking about him.

During playdates, sleepovers, and steamy sexting sessions, these sensitive and loving dads will discover even broken, uncertain hearts can still find love. When a dark family secret threatens Noah’s daughter, they’ll learn two dads are better than one.

This has been, without question, the longest seven days of my entire life. Something happened last week. Only I have no idea what it was.

This is what I know: 1) Noah touched me. 2) Noah touched me twice. 3) I liked it, a lot. 4) I want him to do it again. 5) When I winked at him—obvious move, I know—he blushed. He very clearly blushed, cheeks pink as cherry blossoms.

This is what I do not know: 1) Literally anything else.

It’s driven me mad all week. Is Noah into me? He could be into me. Or he could just be, all the sudden, out of nowhere, super flirty. Friends do that, right? Suddenly become flirty? I mean none of my other straight friends have before. But maybe this is just normal behavior for Noah. Cute Noah. Hot Noah. Strong Noah. Noah, Noah, Noah—

Max startles me so thoroughly my flailing arm knocks my coffee thermos over beside me. It rolls to the end of the bench, and into Noah’s open hand.

“Jumpy?” he asks me, green eyes narrowed in amusement.

“Hey, Max!” yells Sophie. She grabs Max’s hand and pulls him laughing toward the tire swing.

Noah takes his seat beside me on the bench, cheekily tilting my thermos from side to side. “I think you’ve had enough of this. Maybe I should hang onto it for you.”

I snort. Honestly snort at him. I am mortified by my complete inability to keep my cool. This is ridiculous. It’s still Noah. Just Noah. The same guy I’ve sat next to every other week for the last few months. The same guy who smells like soap and pine and is so sweet to his daughter sometimes it makes my heart ache.

He’s only touched me twice, completely platonic touches, by the way, and I can barely look at him without wanting his hands on me again, immediately. I think I’ve masturbated more in this last week than I have in the last year. I’m like an obsessed teenager, both my brain and my cock swimming in visions of his green eyes, big hands, full, red lips. I have blisters.

He looks down. “Yeah, it is actually. Just got it yesterday.” He stretches his arms out, twisting at his waist, flexing his muscles, just for me. In my head it’s just for me, anyway. “You don’t think it’s too tight? It feels tight.”

I’m struggling not to just sit here, slack-jawed, making lengthy and thorough eye-love to the soft green V-neck that looks perfectly poured over his boxer’s pecs—because that’s what Noah does when he’s not solving the city’s traffic crises or securing funds for new parks, he boxes, all sweaty and grunting. I gulp, tearing my eyes away from him and realizing suddenly that this is hell. I’ve sinned, died, and now I’m wandering the Seventh Circle of hell.

He smiles, bright as the sun itself. “Thanks, man. You look good too. New haircut?”

Oh, that is it! He is flirting with me. He has to be. All of it. The smiles, the shirt, commenting on my hair. He is very clearly flirting. He’s never told me that he’s into men. But I’ve also never asked. What if he is? Or what if he’s into one man in particular? And what if that one man is me?

Or, and probably more likely, I am reading way too much into this. Noah and I have been growing closer—as friends—and maybe this is just how straight male friends talk to each other nowadays. Times are changing. People are more evolved. And I have never been so confused.

I clear my throat. “Just had it cut the other day. Thanks for noticing.” I take my thermos back from him, not at all accidently brushing my thumb over his. He doesn’t flinch. What is happening?

“I have some interesting news,” he says, and I nearly pass out.

James is a divorced dad who has his son Max every other weekend. He met Noah on a bench at the playground. Noah is another single dad ,recently divorced, whose daughter Sophie is his son’s BFF now. James hasn’t dated really since his divorce and he really likes having Noah as a friend. It doesn’t hurt that Noah is also very attractive. But he’s also straight. Noah’s situations is a little different in that his wife was having an affair with the very young neighbor and chose him when it came down to it. Now she’s got primary custody – something he’s not happy about – and he’s got his weekends with his daughter. They enjoy their time with their kids and also the opportunity to have some adult conversation with a person with whom they have a lot in common. And maybe Noah isn’t quite as straight as James thinks he is? James and Noah get closer over their conversations on the bench. James shares the reason he’s nervous and panicky whenever Max gets hurt. Noah shares parts of his past and his frustrations with his ex as well. He also offers support and understanding to James after hearing what he’s gone through. And there is this undercurrent of something. Flirting maybe? That can’t be right. Noah is straight? isn’t he? Maybe not so much

I intended to start the review of this wonderful novella with a (probably) pedantic proposition that good literature quite often is either revelatory of some subtle facets found within the reader, or may be an educational vehicle for expanding and extending the reader’s very parameters. Striking thought, yes, but probably inane. Much more basically, it just may be enough if literature touches us – cerebrally?... emotionally? … even physically (Blessed be porn!)? ‘The Bench’ does so much of that. It begins in a theatrically familiar form – two main characters conversing on a park bench. [Yes, it’s been done before – from Mamet (‘The Duck Variations’), Herb Gardner (the oft star-performed ‘I’m Not Rappaport’), and the English even have a Park Bench Theater in York specializing briefly in the genre.] It provides an opportunity, basically setting the milieu of the plot and introducing the heroes. And, so we meet Noah and James. Even with the presence of their respective young children, (with whom they only have every other weekend to persuade them of their paternal love) the park setting is bare, being of no distraction and the author’s scant description sharply recalls stage directions. This is the heroes’ chance for reaffirming and growing their incipient friendship, fraught with some same-sex attraction, by focusing on the commonality of prior failed relationships and their present societal discomforts. It quickly becomes clear that there are fecund seeds for more. Noah is a lost soul, and as his wife has now started to treat him more reasonably, he bemoans “She is stealing my hate.” In his teens, he has had only one minor gay exposure, but despite self-doubt it caused, he eventually ended up married. How wonderfully complex! James is recovering from his gay divorce. Taking what little nerve he can generate, he makes his attraction to Noah clear. A slow seduction and some tentative actions, and the two end up physically engaged. Striking an almost Wagnerian motif, the author makes sure to often note the presence of benches – such as a blanket bench, at the foot of the bed in which Noah and James consummate their lustful affection. This may be one of the truly best depictions of a blow job you are likely to read – let alone participate in. “I come hard, bucking my hips and nearly biting through my lips rather than cry out and risk waking the kids.” Trouble ensues, as might well be expected. Trouble is resolved, with HEA following fast. Terrific.

​James is a public defender with a divorce under his belt. He never expects to be so attracted to a random guy he meets on the playground. It all seems like fate until he finds out, that random guy is straight. That’ll put a crimp in his plans for true love… This was a homerun for me. Both James and Noah has such wonderful personalities. They’re both going through a lot and it’s nice to have someone to lean on. However, their romance is completely unexpected from Noah who’s straight. That was an interesting twist. I liked their growing chemistry as the story played out. Adding in their children and a past complication just added to my enjoyment of this tale. I totally beautiful read I would absolutely recommend!

This is the first time I&#039;ve read anything by this author and I have to say, I was happy I gave this book a chance. I always look for MM books but they have to be written well and Jess K. Hardy did just that. The story is a wonderful and short read. And even though it&#039;s short, it&#039;s packed with emotions and the kids were a wonderful addition. I will be looking for more from this author. If you like MM stories, check this one out!

Such a burst of authentic emotion, detailed romance, and hot sex w/ a dash of suspense thrown in. A wonderful quick read to satisfy all your cravings.

Sweet and super steamy MM romance for when you’re in the mood for a good love story with some teeth, but also a happily ever after! Grab this one for the beach, by the pool, or vacay, and get lost in James and Noah’s respective stories – their friendship, dreamy connection, and slow-burn attraction with lots of heart, and HEAT! Jess K Hardy delivers a crackling romance with skillful prose that never drags, entertains, and gives you all the feels.

Snow White and the Hitman by K. Williams