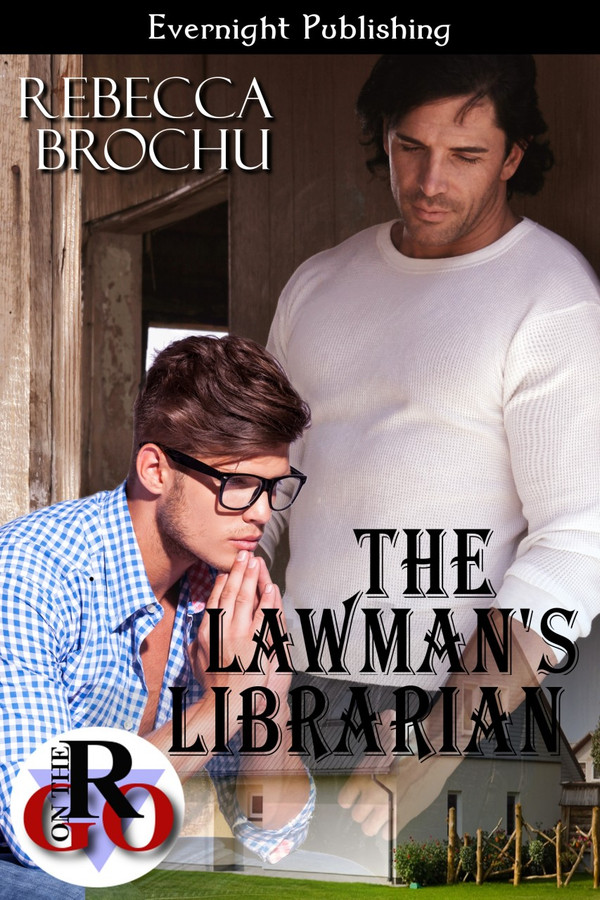 When Sheriff Nick Grey is talked into playing Santa at the local mall by his devious sister, he fully expects to have a miserable time. What he doesn’t know is that she has convinced Peter DeKell to play one of his elves. Peter’s the town’s librarian and has been the object of Nick’s affection since they were both children. The only problem is that while the entire town knows that the Sheriff is head over heels for the quiet librarian, Peter seems at best oblivious and at worst not interested.

After being faced with the temptation of Peter in tights, Nick finally breaks down and asks Peter to dinner and is elated when he accepts. When disaster strikes in the form of an ill-timed kiss, Nick has to make a choice. Is he willing to finally give up on being with Peter? Or will the lawman fight for his librarian’s affections?

He tastes better than Nick had ever imagined, salty but not too bitter, and he still smells like soap and fresh clean skin.  Nick sucks slow and hard, his mouth sliding up and down Peter’s shaft in an easy rhythm while his tongue swirls around and across the head of his cock, pausing every now and again to dip into his slit and wiggle slightly.  Peter’s moaning and thrashing, trying to buck his hips up but unable to escape the iron grip Nick has on his hip.

Nick just loses himself in the act, in the taste and feel of Peter hard and throbbing in his mouth, in the knowledge that he finally has him where he’s always wanted him.  Peter’s panting and calling his name above him and tugging gently at his hair in warning, but Nick ignores it.  He wants Peter to come, wants to taste it, to have him lose control inside of his mouth with the knowledge that Nick was the one who drove him to such extremes.

Peter comes hard and suddenly across his tongue, and Nick swallows it down and keeps sucking.  He cleans Peter with his tongue, makes sure to get every drop there is and then keeps going until Peter is tugging at his hair harder, his cock too sensitive for what Nick’s doing.

He finally pulls off, but he doesn’t really give Peter a chance to recover.  Instead he grabs him by the hips and flips him over onto his stomach so he can spread him open and press his tongue against his hole.  The normally tightly furled muscle is loose from Peter’s orgasm and Nick just presses inside ruthlessly.  Peter moans low in his throat and squirms, but this time he’s pressing back into Nick’s mouth instead of trying to escape.

He fucks Peter slow and steady with his tongue, bites gently at his rim just to feel him jump and twitch, and then slides a finger in alongside his tongue just to hear him whine high in his throat.  Nick keeps going, adds another finger and then another, licks around them and between them, loosens Peter up for his cock because he wants nothing between them, not even the slick slide of lube.

“Fuck, Peter.  Fuck.  God, I can’t wait.  I can’t.”  Nick’s frantic now, his own cock is full and heavy, curving up towards his stomach and leaking desperately.

could only be this halarious. There is some strain but barely a kick in the shins. I think this book is for one of those time when you need a good laugh and need it quick. There are some moments that are going to make you laugh so hard but it is still such a sweet book.

This was a cute, funny story. It’s not meant to be taken seriously and there are some really hilarious lines in it. The town sheriff has had a crush on Peter, the librarian for years. Apparently the whole town is aware of it, but the two guys are simply clueless. So much so that there is a betting pool to see if they’ll ever get together. The Sheriff finally gets up the nerve to ask Peter out and is delighted when Peter agrees. As with all stories, there is a bit of angst, this time it’s miscommunication, that causes a rift. Will they get their act together long enough for Peter to become The Lawman’s Librarian? You’ll have to read it to find out.

This particular short story starts with a bang - funny, erotic with amazing sexual tension where a sheriff/ Santa lusts after an oblivious librarian/elf. I was chuckling along, loving the stuttering lawman and impatiently waiting for that moment when everything is revealed and they get their happily ever after. While everything pretty much does happen in that order, the second part of the story pulled out all these unrealistic and, at certain moments, even cruel situations that the magic for me just evaporated and I was left there reading a simple and predictable story. I disliked the side characters and that was probably what colored my whole impression of the book. It was one of those situations where enemies would have been preferable to friends and family, and that&#039;s not something I like to read about. The main characters were pretty cute, just not developed as well as they could have been, but they did make for a simple enjoyable story that will give you a bit of a Christmas boost

Nick&#039;s telling of the story of how he finally, after even-he-can&#039;t-really-remember-how-many-years, manages to ask Peter out for a date, or least an almost-date, is hilarious. I&#039;m sure Nick wouldn’t agree, and poor, waiting-forever Peter might have his doubts, but I totally loved his trials and their tribulations. This short story is almost a parody of a love story, includes several of the much-seen cliché&#039;s of the romance category, but Rebecca Brochu has put them together in such a humorous way that the end result is romantic comedy of the belly-laughing kind. Nick is a small town sheriff and pretty tough, or so he likes to think, but there is one glaring weakness in his life. He lacks the courage to ask Peter out on a date. He admired him from afar when he was the nerd in school, and now that Peter is the town librarian, Nick thinks he is even sexier and is deeply in lust, probably in love. He doesn&#039;t care, he just wants to have the chance to call Peter his lover. Well, after he can manage to take him out on a date. Peter seems oblivious, and Nick finally manages to get his courage up, after an eventful afternoon or two where he plays Santa and Peter in as elf in very tight tights. Unfortunately, fate has other plans, and Nick almost gives up. When he finally manages to try again, on Christmas Eve, well, you&#039;ll have to read it for yourself. It is just too cute! If you&#039;re looking for a story that will entertain and make you laugh, if you enjoy romantic comedy, and if you&#039;re looking for a love story with just a touch of Christmas magic, give this one a try. I loved it and am still laughing.