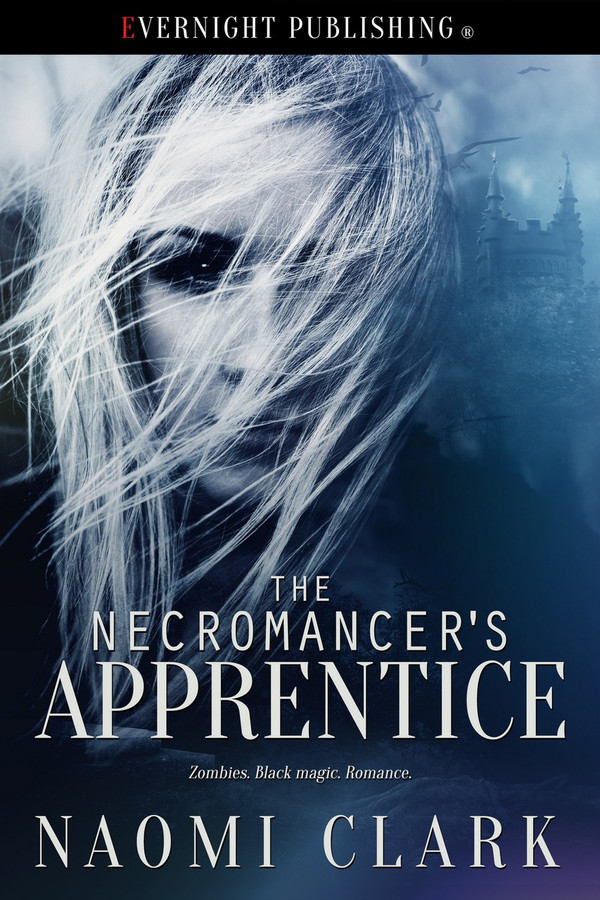 All Evanthe wants is to hone her necromancy skills and gain the affections of her reclusive mentor, Morrow. Just when she thinks he might reciprocate her feelings, a face from his past threatens the life Evanthe is working so hard for. Now she's up against rogue necromancers, smarmy demonologists, and blood-thirsty zombies as she and Morrow fight to protect a secret that could kill them both. Evanthe's a talented necromancer, but that might not be enough to guarantee her a happy ending.

“Evanthe.” He sounded strangely hesitant, unlike himself. “We should...” He trailed off, looking down as if he too was fascinated by the sight of his hand resting on hers. “We should start,” he said.

It wasn’t what he meant to say, she sensed. Hope flared treacherously inside her. They worked quietly after that, murmuring to each other now and then. Morrow led the spell casting, rubbing crushed vetiver into the salve, then rubbing the salve into the pickled Hand. He chanted as he worked. It sounded Latin, but Evanthe knew it was mostly nonsense, a way of channeling the magic. And the magic felt good. An icy caress down her spine, tingling against her skin and raising her own magic to feed into the spell.

A few times Morrow brushed her hand again, his fingers trailing fire up her arm and shaking her concentration. The Hand glowed a soft, ugly green as they worked and the magic sank in. It would glow the same green when the client activated the spell, sending whoever she chose into a deep slumber.

An hour later, they were finished. Morrow stopped chanting and the weave of magic fell away from Evanthe. She sighed, shoulders slumping in disappointment. There was nothing like the buzz of magic running through you. Nothing she’d experienced yet anyway. She stole one quick glance at Morrow as he wrapped the Hand in a simple white cloth.

“What time are we expecting the client?” she asked.

Without glancing up, he replied, “An hour or so, I’d guess. You don’t have to hang around for that if you don’t want.”

Her cheeks flamed again and she wished bitterly she wasn’t so pale. Her entire face must light up like a beacon. “You don’t want me there?” She tried to sound light, unconcerned, but was pretty sure she sounded sulky and sharp.

He faced her, his eyes dark, lips curved down. Not frowning... regretful, maybe. “I always want you around,” he said. “I don’t want you to feel obliged to be here. You could be out...” He trailed off, waving his hands vaguely. “Doing something. With people your own age.”

She had to smile. He clearly had no idea what a twenty-year-old woman might do with her spare time. “Don’t give me the old man routine,” she teased as he approached. “You’re not that much older than me.”

She was poised at the foot of the stairs, blocking his way up, and her heart raced as he stepped close, so close. Deliberately close, she felt, feeling the heat of his smile as he answered.

Now her whole body flushed. He had to kiss her, surely? You couldn’t get this close without kissing. She didn’t dare close her eyes in case he vanished. His eyes glowed, lips curved in that faint smile she was never sure meant he was sad or happy.

He ran his fingers down her cheek, brushed his thumb over her lips, making the air catch in her throat. “Evanthe.” He whispered her name like it was a charm, fingers moving back up to tangle gently in her hair and ease her ever so slightly closer, and now she dared to close her eyes, anticipation sending shivers through her.

Then he sighed and released her. Evanthe’s eyes flew open. “Morrow?”

He slid past her. “I’m sorry. That was...inappropriate.” Then he was gone, running up the stairs and leaving Evanthe alone in the workshop, embarrassed, confused, and furious.

I&#039;ve read several books from Naomi Clark. She definitely flew to the top of my favorites and automatic lists. And this story, The Necromancer&#039;s Apprentice, is no exception. Novella in length, but that&#039;s about it. There is a ton of story within these sixty-something pages! Evanthe (beautiful and unique name, by the way!) is twenty years old and living with Morrow, who is a mix between guardian, mentor, and the man who sparks her heart. She&#039;s had a hard life, bumped from foster home to foster home. Living with Morrow is the first time in her life she&#039;s ever felt at home. And she and Morrow, well, they practice Necromancy! Necromancy, in case you don&#039;t know, is the art of communicating with the dead. Creepy, right? Well, Naomi does such a beautiful job with this story, that even when there are rotting body parts around, you don&#039;t feel creeped out at all. Or, if you are like me and love a good spooky story, then this is perfect for you! &quot;He&#039;d taken her in, convinced her there was nothing wrong with her. The first person that made her feel valued, when all her life people had been determined to make her feel abnormal.&quot; Morrow is seemingly the strong silent type, wrestling with himself between what he thinks he should do and what he wants to do where Evanthe is concerned. But she is not a teen anymore, and he has feelings for her. I was hoping and waiting for him to make a move, to set my anxiety to rest! I think these two have some real flair, and I would love to see a full length story about them! Now don&#039;t get me wrong, this isn&#039;t just about romance. You are dealing with some heavy duty magic, demonology, The Hand of Glory, zombies.... Yep, zombies!!!!!! Evanthe and Morrow are fighting to save themselves from several onslaughts, and it&#039;s them against the world. There&#039;s the Guild, and then there&#039;s Natasha - Morrow&#039;s nasty ex! Oooh, I really don&#039;t like her!! Oh, and theres zombies.... Yep, zombies!!!!!!! I have nothing but wild praise for this book, and I can&#039;t wait to read more! You got some romance, some heroic behavior, a great mystery, and hmmmm, what else? Oh yeah, zombies!!!!!!!!!!

Evanthe is like any other necromancer - she wants to be respected for her craft, fall in love and have a comfortable home to go to every night. She has the falling in love part crossed off her list, at least on her side, and the comfortable home part. For now. She&#039;s still working on the respect for her craft. Morrow, a reclusive necromancer who saved her from the series of foster homes she had been enduring, is having trouble seeing her as anything but the seventeen year old girl he took in years ago. He is her mentor and believes that is where their relationship should end. At least, that&#039;s what he says. As the danger in their lives increase, so does the heat driving their relationship. Naomi Clark has written a novella that has the making of a good series. Evanthe is young, still in training, and willful. She also has strong necromancy skills. These things could get her into some interesting trouble in the future. The Necromancer&#039;s Apprentice is well written and the characters are for the most part well developed. One exception for me is Morrow, Evanthe&#039;s mentor. I wanted more from him but I might be asking for too much from a novella. My first question about him is his age. Multiple times in the book he refers to the age difference between him and Evanthe, but it is not clearly spelled out what that difference is. I would have like to have learned more about his work and dig a little deeper into his secrets. I am hoping that there is a sequel out there that will give me the answers. Also, Evanthe struck me as a dichotomy. On one hand, she wants to be treated as an equal, yet she looks to Morrow in most situations to rescue her. I would love to see her toughen up a little bit. She can raise the dead so she must have a deep well of strength inside of her. I thank the author for a review copy and I give the novella four stars.