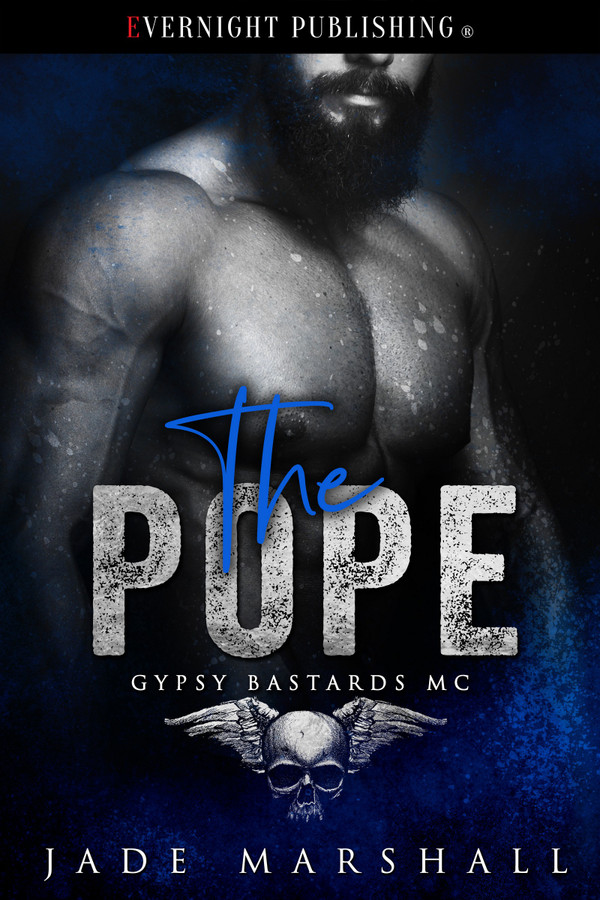 Storm has been in love with Colin “Pope” O’Brien since she was thirteen but it wasn’t meant to be. Years later, the opportunity to be together presents itself—but it's stolen away in the blink of an eye.

After a near-death experience, Pope decides to bear his heart to Storm and finally claim the woman he loves. But it just doesn’t seem in to be in the cards for them. Patience isn’t his strong suit, but forcing his way in will only push Storm further away.

Secrets, lies, and an outside threat could keep them apart. Is the timing any better this time around? Is love enough or will there always be something keeping them apart?

She takes a deep breath and nods. She steps away from me but takes my hand as she leads me to her bedroom. Stopping at the foot of her bed, she turns to face me again. Slowly, like she isn’t sure of what she’s doing, she raises her hands to my shoulders and starts to work my cut off. When she gets it past my arms, she folds it with care and places it on the stool in front of her vanity. Returning to me, she lifts the hem of my t-shirt to remove it. I don’t speak, don’t tell her to take off her clothes the way I want to. She needs to be in control at this moment and this is me giving that to her.

She doesn’t show the same care for my clothes as she did my cut, instead, tossing my shirt to the floor. As she stares at me, her breathing accelerates and she touches my bare skin. Her nails run over my tattoos and then my abs before she moves around me. She touches the tattoo on my back and plants a kiss between my shoulder blades. I always knew Storm loved the club, but her reverence to my cut and the tattoo of our patch on my back almost unmans me. It’s enough to nearly bring me to my knees.

She turns me around so I’m yet again facing her. Pushing, she walks me back toward the bed where I wait on the edge. She has a plan and I’m smart enough to know not to interfere. Taking three steps back, she smiles at me, but it’s not the smile I’m used to. Instead of the self-assured Storm I have always known, the woman in front of me is almost shy.

“Tell me what you want.”

The words leave her on a breath, no louder than a whisper. She’s dressed in jean shorts and a black halter neck top. She isn’t wearing the shoes from earlier, having kicked them off somewhere along the way.

“Let me see you. Show me what is mine from today on out.”

This is the first time i have read a story from Jade Marshall and i really liked it, it has all the feels and action that kept me invested, i love MC for the loyalty and family and Pope and Storm are wonderful characters. I received a copy and I am voluntarily leaving my own honest opinion

Jade Marshall did a great job on this story. The Pope had a strong plot that was written well, it was packed with many emotions. Pope and Storm were strong characters that have been through a lot. Their journey had many ups and downs but they were drawn to each other, their connection and chemistry was strong, it was sexy, they were good together. This was a good story, I enjoyed it. Thanks, Jade Marshall. Good work :)

Wow! Twists and turns, secrets, betrayal and sweet, tough bikers, what more could you ask for in an MC? Collin ‘Pope’ O’Brien is the president of the Gypsy B* MC. He has a history with Storm and keeps her at arm’s length, although, that’s not what he wants to do. He grew up with her and her sister Winter. When Storm told Collin that she was in love with him as a teen he turned her away and she left her home to be on her own. She needed to get away from him and the heart break. He knows that she had it rough, but he has no idea how rough or what her life was truly like when she left. Storm tried to be loyal to her sister and stay away from Collin, but she needed to confess her love to him. He rejected her and she was heartbroken. She found her way back into his life, but they both try to keep their relationship to friendship, that is until tragedy strikes too close to home for both of them and they realize that life is too short. The only problem is that there is a huge secret that could destroy what they want to build. This story is a second chance romance with twists, secrets, betrayal and tragedy. It is heartbreaking and tragic but it’s also full of great characters, tough bikers that are wrapped around a baby girls’ finger, and a family of loyal men that will fight for the safety and protection of their loved ones no matter what. I loved this story although it brought me to tears from the very beginning. It is tragic, but with a HEA. I love the strength and sassiness of Storm and Brogan. They aren’t afraid to stand up for what they believe, and they won’t take any crud from anyone. I love the Gypsy B’s and I look forward to more of these great characters and wonderful books by Ms. Marshall. If you like tough bikers with a soft spot for kids and women, then you will love Ms. Marshall’s Gypsy B’s.