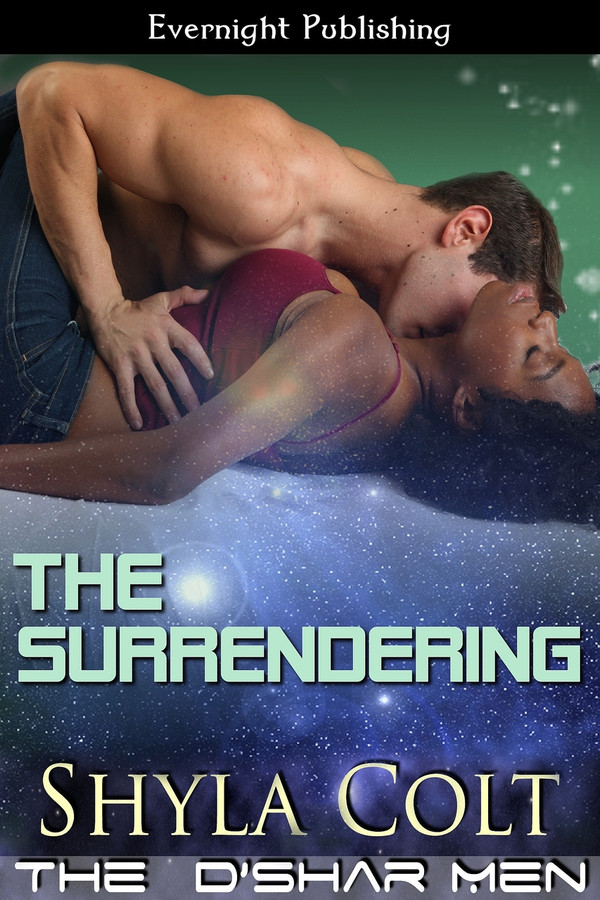 Ivy Guerin has always been more focused on science than her sensual appetite. She's one of the top doctors in the field of genetics, working closely with the Shar from the moment they were revealed. She’s honored to be included on a top secret mission that involves space travel. But the biggest surprise is finding out she's Kade D’shar’s mate.

Thrust into an alien mating period, Kade must balance his burgeoning romance with Ivy and his mission to defeat a powerful enemy. Their journey is full of ups and downs, forcing him to dig deep inside and reconnect with the savage genes of his alien race. As he redefines what it means to be a  D’Shar man, he realizes in order to survive they all must undergo a surrendering.

With the monumental task accomplished, they were back to their original conundrum. The space between them sizzled with want, and the need to touch and be touched. A sharp slice of desire cut through the weariness seeping into her bones. She’d never be able to act on all the naughty things running on a loop in her head, but she needed something, a morsel or tidbit to tide her over. Her life had been a dull dream in black and white. Kade woke her up and introduced her to a world full of color.

He closed the blinds and walked toward her, his long legs eating up the distance between them. A few inches from her chair, he placed his hand on her stiff neck and began a gentle massage that liquefied her bones and heightened her senses. She moaned, tilted her head back, and leaned into him. After a few minutes, he stopped.

“Now where were we?” His breath tickled her ear. “Oh yes, we were right about here.” The coy awkwardness of first discovery was gone. He plundered her mouth like a pirate seeking booty from a ship. He pulled away, nipped her bottom lip playfully, and dove back in for more loot. His arms were braced on either side of the chair, boxing her in. She could easily get used to this confinement.

She spread her legs, allowing him to step closer. Their kiss deepened, and she brought her hands up to grasp his arms. The muscles flexed in response. He pulled away then dropped to his knees. His eyes were molten brown as they peered at her from his new position between her legs. He shoved her skirt up further, he pushed her legs wider. He brushed a thumb over her engorged clit. The heat from his hand and the feel of lace of her panties made her jump.

He rubbed her again. She whimpered and tilted her hips in a feeble attempt to experience every nuance.

“I know we said we’d take it slow, but if I don’t taste you on my tongue soon I’m going to lose it.” He trailed a line down her slit with his slender finger, pushed the lacy material between her pussy lips, and pulled the material, running it over her clit. The tops of her thighs grew slick with her moisture. She swayed her hips in time with his manipulations. Her mouth parted, and her eyelids shut.

“No. I want you to watch us. I want the picture of what we do ingrained in your mind, the same way it will be in mine.” His voice dropped to a silky smooth alto. The words were so sincere, she melted a little. Could fate have given her a better man?

“I promise I will do everything in my power to keep you happy, Ivy.” He leaned in, placed a sweet kiss on her lips then dipped a finger into her cunt.

He curved his digit, slid in knuckle-deep, and traced a circle around her walls. His slender finger was long and agile. It reached places inside her that set off fireworks. Her muscles contracted, gripped him tight.

“You’re so tight, Ivy. I can’t wait to become one with you and cement our bond.”

“Sh. You don’t have to say anything, just enjoy this moment.” He found a rhythm and a specific slant, which made her body quake. He added another finger.

She gripped the arm rests. The look in his eyes held awe. It cracked through the wall she wanted to keep up between them. This was her only chance at true happiness. Didn’t she owe it to both of them to embrace it, hold it close, and give it her all for as long as she had?

He hit a place inside her that made her cry out. Kade swooped in, covered her mouth, and thrust inside her at a rapid pace. Disorientated by heady emotions and waves of pleasure, she focused on his dark orbs to stay grounded. Pushed over the precipice of pleasure, her body stiffened and shook like the ground during an earthquake. Her eyes closed, her back arched, and her toes curled in her high heels. He swallowed her shouts, and continued to caress her through the orgasm.

She glanced up at him with bleary eyes.

“God, I am so much better than okay.”

He chuckled. A sweet, almost bashful smile appeared on his face. “Good.” He brought his fingers up, slid them into his mouth, and moaned. His face took on an expression of pure bliss. He took long, greedy, pulls that made her core heat all over again. Popping the slender fingers free, he spoke. “You’re rich and bittersweet like a dark chocolate. I want to sip you straight from the source.”

Her jaw dropped. Had he just given her a lyrical account of her pussy’s flavor? He moved in, nudging her sensitive clit with his nose.

“Can I?” His breath teased her core.

“Thank the Stars!” He lifted her hips, traced a line down her slit with his tongue and entered her. His tongue explored every inch he could reach. The slow, sweeping, motions, accompanied by sounds of enjoyment, quickened her breath.

“Oh God, Kade.” He licked her swollen bud, building the fire inside her higher. He sucked her clit into his mouth.

“Oh.” She cried out, clamping down on the inside of her cheek to keep herself silent. She shoved his head closer, she ground into his face. He hummed, and she exploded. Her hips lifted and she fucked his face through the wave of pleasure. It had never been like that before. His head popped up and his chin shone with her juices. She bent and licked his face clean. Her nectar boasted spicy sweetness. Kade growled his approval.

Six years ago the alien race Shar, revealed that some of them had been living undetected on Earth and asked for permission for their entire race to relocate to Earth as their home planet was dying. Humanoid in appearance though with superior intelligence, speed, strength and psychic ability, this should mean that humans would find it hard to accept them without suspicion. One the reasons that they accepted at all are because of the work of scientist Dr Ivy Guerin. Her work and interviews with the Shar has made humans more accepting of their plight. Ivy is an unabashed nerd, and is fascinated by the Shar and one of their royals Kade. Like Ivy, Kade is a scientist and he&#039;s always wanted to meet Ivy but never had the opportunity. When the two do meet, the Wanting, the Shar mating instinct is triggered which though unexpected causes problems as Ivy is hiding a secret which leads her to think her future with Kade will be both glorious but short. I read this book without having read any of the previous books which did not lessen the impact of this enjoyable sci-fi romance. I like the characterization of Ivy and Kade though I do think that as a relative newcomer to Earth his dialogue should have been far less colloquial and there were a few faults with editing. This did not detract from a romance which made me want to immediately download the other books and lose myself in the writing. Be warned that this book ends on a cliffhanger which is continued in the next book in the series.

Kade is of an alien race known as D’shar. Ivy is a top scientist for earth. Together they search for a badass enemy and find out that they are mated. Kade, oh, Kade! What an amazing man! He made me want to go crawling into a spaceship and search the vastness of space for the D’shar people. He was so hot and sweet but gorgeous. I really loved his personality. Ivy was adorable and she was equally as lovable. When they two meet, I was enthralled and knew their story would be one of my favorites. The plot is really unique and I love the world that Ms. Colt created! I haven’t read any other book in the series but it was easy to follow. The surrendering is a must read! You’ll fall in love with the D’shar men like it did!

Kade, oh, Kade! What an amazing man! He made me want to go crawling into a spaceship and search the vastness of space for the D’shar people. He was so hot and sweet but gorgeous. I really loved his personality. Ivy was adorable and she was equally as lovable. When they two meet, I was enthralled and knew their story would be one of my favorites. The plot is really unique and I love the world that Ms. Colt created! I haven’t read any other book in the series but it was easy to follow.

This is the third book in the D&#039;Shar men series and let just say Ms Shyla is bringing it with this one. I so cant wait to read the fourth book.... This story revolves around Kade and Ivy working together with a team of humans and D&#039;Shars to find the missing element and clues to finally stopping Tavel and bringing a end to him. But there is also the Wanting that takes place in the story between Kade and Ivy..the sex, the love and the desire as well as the lengths one will go to to protect your mate (spoiler alert..there is a side story that will show you the lengths that a D&#039;Shar man will go for the woman he loves)..Then there is Tavel, now Tavel is off the hook...he brings evil to a whole new level... All I have to say get this book if you read the other 2 books and enjoy the ride...It is a must read and you will enjoy this story...spoiler alert..there is a baby in this one..yeah :)

The Bond by Shyla Colt and Nikki Prince

Loved by a Roughneck by Shyla Colt

Call of the Blood by Shyla Colt