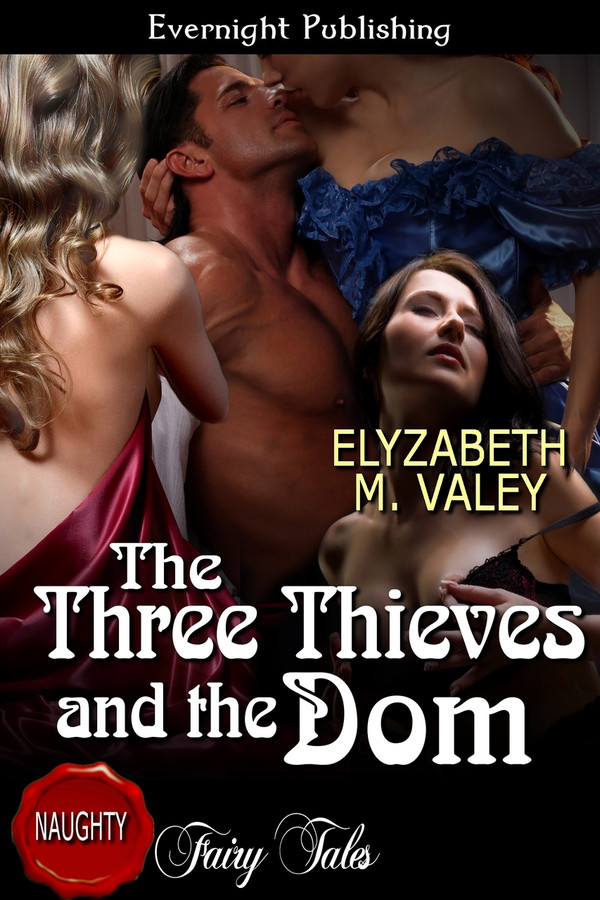 Conall Dougal, infamous rake, wakes up one morning to find his most precious possessions have been stolen by the women he loves. Devastated, he goes in their search determined to find them and extract the truth from them in any way possible.

Penelope, Isidora, and Grace are on the run. They’ve committed a crime and left behind the man they love. Presumably safe, they are stunned when he turns up ready to claim them back and discover the truth.

But, what is the truth? And will Conall’s special kind of coaxing make them speak?

“Do you remember our first time together, little angel?”

“Were you frightened then?”

She shook her head. “No sir, I was excited.”

Conall leaned into her, brushing his lips against her neck and causing goose bumps to rise on her flesh. “I was too.” He breathed in deeply, as if committing her fragrance to memory. His tongue swirled around the outer shell of her ear and she arched her body into his.

“So responsive, always so responsive. I want to fuck you, Gracie. Hard and fast because I want to punish your pussy for leaving me bereft.”

Grace moaned. The loud sound echoed in her ears. Panicked, she pushed him, desperate to escape from the clutches he had on her heart and soul. With ease, Conall captured her hands in his, binding her with his strength. Grace panted.  Liquid coated her pussy as her gaze found his.

Grace swallowed. She couldn’t lie to him, but she could choose not to answer.

Conall smirked. “I know you are, angel.” Slowly, he lowered her hands and pressed them against his groin. Instinctively, she curled her fingers around his hard length. Conall groaned. “You want this as bad as I do.”

“No. I can’t.” Grace forced her hands away from his erection. A growl-like sound burst through his lips, catching her off guard. Grace yelped as he pulled her hair, sharply drawing her head back.

“Cannot or will not?” His passion-filled gaze flitted over her face for an instant. “Never mind,” he snarled. His lips slammed against hers in a punishing kiss that took the air from her lungs. He kept his hand on her hair so that she couldn’t move, controlling their kiss. She could only comply to his sensual touch, and that was all she wanted to do. His kiss deepened, his tongue seeking out hers in hard, angry swipes full of longing and unspent desire. Grace moaned loudly, as with his other hand he found her breast and roughly massaged it through her clothes. Abruptly, he pulled back.

“Angel, little angel of my heart. Will you not tell me why you left?”

Conall’s face transformed. His grin turned feral as his eyes narrowed, a fiendish spark in their depths.

“Then I will draw it out of you. I will kiss, lick, and make you scream out the truth.”

He punctuated each word by running his fingers across her chest and causing shiver after shiver to rack her form. Wetness slid between her thighs and her breasts ached for his touch. She had to get away from him. Unlike Isidora or Penelope, Grace knew that she was the weakest of them. She was like a house made of straw, one that could be thrown down by the wind in a jiffy. She could not allow it. She had promised Penelope to keep her secret, and she would.

“Would you look at that? It’s already eager for my touch.”

Somehow, he managed to pull out her breast. Grace watched paralyzed as he leaned into her. His lips formed an O around the wrinkled flesh. His tongue swiped over it and her body arched automatically, her hands clutching onto his shoulder for support. His mouth closed hard over her nipple, his teeth grazing the sensitive skin, and she screamed. Conall’s hands grasped her bottom, drawing her into him as he fervently sucked on her breast.

“Do you feel it? My hard cock pressed against you? Waiting for your hot pussy to wrap around it like the glove you wear over your hand. My little angel, you always enjoyed serving me. Whatever I asked, you did without question and always with utter pleasure. Will you do so now?” He pulled out her other breast, twisting the nipple between thumb and forefinger.

“Tell me, Grace.” He pinched harder. Tears gathered at the back of her eyes as pain collided with pleasure and the desire to tell him all.

She was unable to stop him as he hitched her skirts to her waist and found her wet folds.

“Oh God, Grace.” His voice broke, and for the first time ever she realized how affected he was by the situation.  “I want to fuck you, Grace. I want to stick my hard rod up your warm, wet pussy. I want to taste you, love. I want to hear you scream my name as you fall from heaven.” He pushed two fingers deep into her. Grace’s legs trembled.

“Tell me,” he urged, pumping them in and out of her.

“Yes?” A third finger wound its way inside of her and she threw her head back, giving in to the rising pleasure.

They froze at the sound of a loud knock at the door.