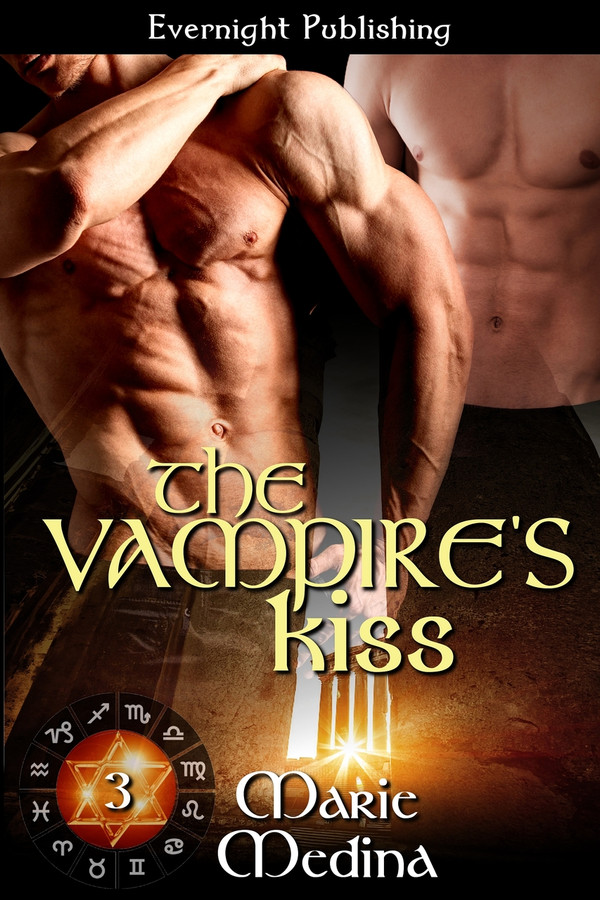 The Year of Stars, 3

Loxis lost his fated mate years ago, and he put aside all ideas of ever falling in love. He devoted his life to fighting demons and helping their victims to fill the void left in his heart. Everything changed when he was summoned to fight a demon and help rescue a young man named Hiroki. Loxis can’t fight his feelings for the damaged young man, but he fears scaring Hiroki with his desires.

Hiroki has finally emerged from a lifetime of pain and torture, and he wants nothing more than to share that life with the man who rescued him. Loxis treats Hiroki as if he is made of glass, though Hiroki knows he sees longing in Loxis’s eyes in unguarded moments. As they embark on a mission to Hiroki’s homeland, he vows that he is going to make the vampire acknowledge what is happening between them, no matter what he has to do.

Loxis did not return to his room until much later than he’d expected. A servant had been asked to keep an eye out for Hiroki, and she said he had asked to be shown to the library and had stayed there reading for hours. Loxis entered the room quietly, casting his eyes to the beds set on either side of the far window. Hiroki lay in the one on the right, motionless. Loxis undressed as silently as he could, watching Hiroki to see if he might stir. When Hiroki didn’t move, Loxis approached with a soft step to look at him. He reached down to touch Hiroki’s hair, but then he drew his hand back, not wanting to wake him or risk giving in to temptation. However, when he sat down on his own bed, he saw Hiroki’s eyes pop open.

“You look tired,” Loxis said, not wishing to pressure Hiroki. At times, the young man opened up right away, but in general he still kept his fears and pain inside far too often. Loxis knew he himself was often guilty of the same thing. He did not want to embarrass Hiroki, but he longed to know why Hiroki had been crying.

“I am. I did not sleep well on the journey here.”

“You spent some time in the library? I’m sorry I was away for so long. I needed to talk to my brother.”

Hiroki was silent a while, looking down at the floor. “It’s fine. I was reading.”

“Anything interesting?” Loxis asked, wondering why Hiroki seemed so dejected. Was it only fatigue? His countenance carried such sadness now.

“Lots of subjects. History, some folk tales. There is much I don’t know about. My education was quite limited. Shigure read often to pass the long hours—he’s very smart—but I didn’t care for it.” He finally met Loxis’s gaze. “I read about shifters. It made me sad looking at drawings of ones that have become extinct. The ones of dragons were beautiful.”

“One day, you’ll have to ask Ryu to shift for you. It’s amazing the first time.”

Hiroki looked away again, as if completely uninterested in what he’d just been talking of. “I also read about vampires.”

The pause stretched on and on. Did Hiroki have questions? Where might those questions lead? It seemed rude to say nothing. “And what did you think? Did it reassure you?”

Hiroki shifted more under the covers, toying with the corner of his pillow. “There was a great deal I never knew about vampires.”

Loxis stood and went to kneel by the bed. “Hiroki, did something scare you? You’re behaving oddly, and it’s troubling me.”

Hiroki stared at him a moment. “Do you need to feed, Loxis?”

Loxis blinked repeatedly, glad of the low light. Vampires had white irises, but the white changed to red when they wanted to feed and black when sexually aroused. Loxis knew his would be black now, though he tried to fight it. His demon half enabled him to do so at times, but since he could not see his reflection from where he knelt he had no idea if he was succeeding. The thought of biting Hiroki excited and stirred him in a dangerous way.

“I’ve already fed, Hiroki. Because I have demon blood, I only need to feed once a day.”

Hiroki seemed to flinch at these words. Why would he do that? Loxis touched his shoulder. “You honor me by offering, Hiroki, but you need your strength.”

Hiroki rolled to his back. “Then we should sleep. I would like to leave early, as you suggested.”

Loxis wanted to make Hiroki look at him, make him reveal what was wrong. However, they both needed rest, and he did not wish to upset Hiroki further.

“Yes, we should. All is arranged, and it should only take us a day and a half. We’ll stop in a village I’ve visited often. I saved the priest’s brother from a demon, and they will be happy to give us a place to stay.”

“All right,” Hiroki said, rolling over and pulling the blanket up to his neck.

Loxis stared down at Hiroki, confounded. He wanted to keep talking, but another part of him wanted something else. He fought the urge to climb on top of Hiroki and force the young man to look at him, to acknowledge their connection. Above all else, Loxis wanted to bite Hiroki and give him pleasure, the kind that would banish all of his sadness and cares, at least for a few hours.

Instead, Loxis climbed into the other bed and tried to quiet his mind. He had no success. Just as he’d managed to doze a little, he heard a sharp whimper from Hiroki. Loxis watched Hiroki kick at the covers a moment and then go still again. When the young man began mumbling, Loxis rose and went to him. He climbed into the small bed beside Hiroki and spooned against his back. When nightmares had plagued Hiroki before, he had climbed into bed with Loxis and huddled against his chest in a fetal position, facing the vampire and resting his head near Loxis’s heart. This position was far more intimate, and Hiroki relaxed right away. Loxis even thought he heard a sigh. With his arms wrapped around Hiroki, Loxis finally managed to relax enough to fall asleep.