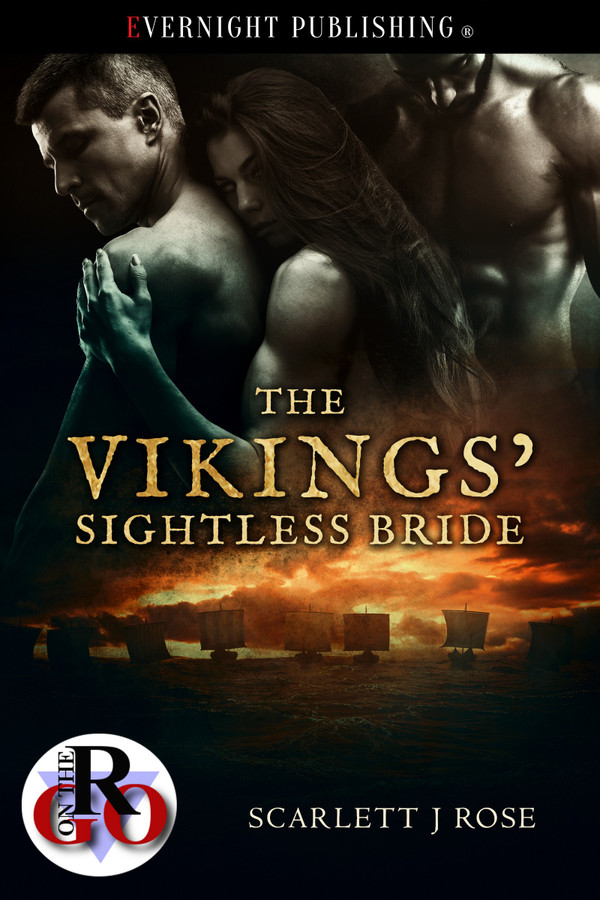 After her father’s death, Alfild’s life will change forever...

Being born blind in the time when Vikings had reached the shores of England, she has little to look forward to but a lifetime of service as a nun unless she can find a man to marry and take over the family farm—until she discovers two men with strange accents in her stables.

Who are these two men, and why does her body respond in such a confusing but arousing way when she feels them near her, when their voices carry to her ears, or their scent to her nose? Will she find a new life with Jorgen and Aldric, or will they abandon her to her fate?

“I wish to ask you something,” I said. “May I touch your face, to feel what you look like?”

His hand took one of mine and brought it to his face.

I felt the rough wiriness of a long beard. I followed it up toward his face, my fingertips tracing a hooked nose, broad cheekbones, and a strong brow. I traced back down toward his lips, hidden beneath the scruffy beard he bore. I felt him kiss my fingertips before he took my index finger between his lips and gently sucked, his teeth grazing my fingertip before his tongue flicked the nip away. A hand slid up my side to caress the underside of my breast, while the other wrapped around my hips, pulling me closer against his body. Beneath my bottom, I felt something harden and rise. I shifted, unsure of what exactly was happening. He groaned softly, as if he was being tortured.

“Those men of the village were fools,” he muttered. “You are a woman as glorious as Freyja herself.”

My body shivered again with that unnamed desire. “Who is she?” I asked, and Aldric moved his head to nuzzle at my throat. “She is a goddess, of love, sex, fertility, war, and death. She is everything wonderful in life itself.”

Completely alone after her father’s death, Alfild knows her world will become far more difficult. Born blind, she knows her options are limited, though she strongly wishes to remain on her family farm. When Vikings come to conquer their small village Alfild sees her chance to avoid a life in the nunnery. I really enjoyed this short story. Told by Alfild in the first-person perspective I was initially concerned this would make it difficult to fully grasp Jorgen and Aldric’s characters and intentions. But I was relieved when instead this perspective really helped me appreciate both how lucky and smart Alfild was. Her father had helped set up their little farm in a perfect – and completely historically believable – manner to suit her blindness, using different stones and wood beams so her staff could tap different tones and sounds to lead her in various directions. Seeing the world through Alfild’s sightless eyes was interesting, refreshingly different and educational for me. After reading this short story once I immediately re-read it (something I don’t do very often) to pick up all those smaller aspects I might not have caught on the first reading. The author did an amazing job with this and I found the story and Alfild’s perspective in particular gripping and delightful. While set long in the past, readers who really love their historical accuracy might need to give a bit of leeway. I feel the author did an excellent job with balancing the actual harsh realities of the historical time period with making the story palatable and readable. I fully understand most Vikings and their actions were not hero material or romantic in the least, but with just a little bit of flexibility in this area I feel the author has kept much of the richness and difficulties of the historical setting alive and accurate, but still softened enough areas to make the story steamy and a delicious read. Personally I really enjoyed the story and setting and feel the author did well with this. Sensual and steamy, I found Alfild falling for both Aldric and Jorgen to be a little fast-paced, but understandable given her circumstances. Readers looking for a refreshingly different style of story should find this suits their needs wonderfully. I enjoyed both the historical setting and the outlook Alfild being blind gave to the story and romance as a whole. This will definitely be a story I reread a number of times into the future and an author I plan to keep an eye on. Recommended.