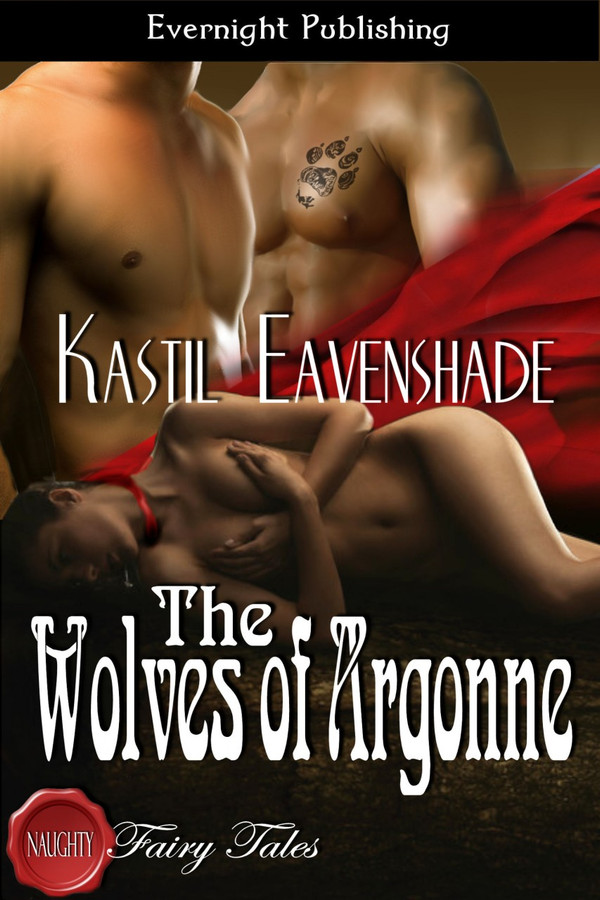 Rosabel lives on the edge of the Argonne Forest, a place where werewolves rule and don’t care for humans meddling in their affairs. During the harvest festival, she catches the attention of the alpha, Ulric. Beneath the mask, he makes his intent known with one hungry stare and awakens something dwelling deep within her soul.

She discovers her sexuality and submits to the whims of the virile and powerful shifter. When the arrival of another werewolf challenges Ulric for his prize, Rosabel finds herself between two wanting lovers.

Can Rosabel choose between her dominant suitors, or will the overbearing males learn to share their lady in the crimson cloak?

“Princess, princess. Must I keep my eye on you night and day?”

She pressed against the cave wall as the man grinned at her, his hand on the pilfered torch. The same male from her bedroom encounter. He closed the distance between them. Her palms flattened against the stone to suppress the urge to dance her fingers along his flesh. The same urges welled in her again without the aid of the intoxicating moon.

His body molded to hers, and she shivered as his restrained but hard cock rubbed near her throbbing sex. She wouldn’t allow him to sway her as before. Rosabel needed to control the insatiable need to mate with another werewolf.

“Why are you here?” She raised her chin and met his lusty stare. “Come to have a taste?”

“Perhaps.” He inhaled, a demure smile on his face. “Are you offering?”

“You know who I belong to.” Her mouth opened just enough to run her teeth along her lower lip. “Who knows what he will do if he catches a whiff of your scent on me.”

“Oh, princess, you don’t know what game you’re playing.” He bared his canines, a low rumble emulating from his belly.

“My name’s not princess, werewolf.” She leaned closer to his face, giving him a sniff to see how he liked it. His exotic fragrance almost had her suckling at his neck to have a taste but she resisted—barely.

“What is your name, my prince’s little plaything?”

“You first.” Her tongue teased her lips again, and she felt his cock jerk against her. He hissed, his eyes taking the golden tint of his species. Her lips curved into a smile as she ground against his crotch. “After all, you’ve already tasted what I have to offer.”

“Conall.” He brushed a kiss on her ear, and she fisted his shirt, unable contain her desire. Her cloak came free beneath his dexterous work, and one by one, her blouse buttons loosened.

“If he smells you on me....” She squealed as his fingers pinched a nipple.

His lips seared her skin. She gasped, her hands seeking his growing bulge. “Your arrogance will be your downfall, Conall.” Her desire peaked but she wanted to dominate the proud male before her. To touch and taste his skin. To hear him murmur her name over and over.

“Call me Rosabel.” Her tongue flicked out across his nipple.

He drew back, his eyes heady with desire. “You have no power over me, woman.”

Rosabel revealed nothing beyond her wicked grin and searching hands. With a yank, his cock spilled free of his pants. She chuckled as she sank to her knees. “I’m going to enjoy proving you wrong.”

The Wolves of Argonne