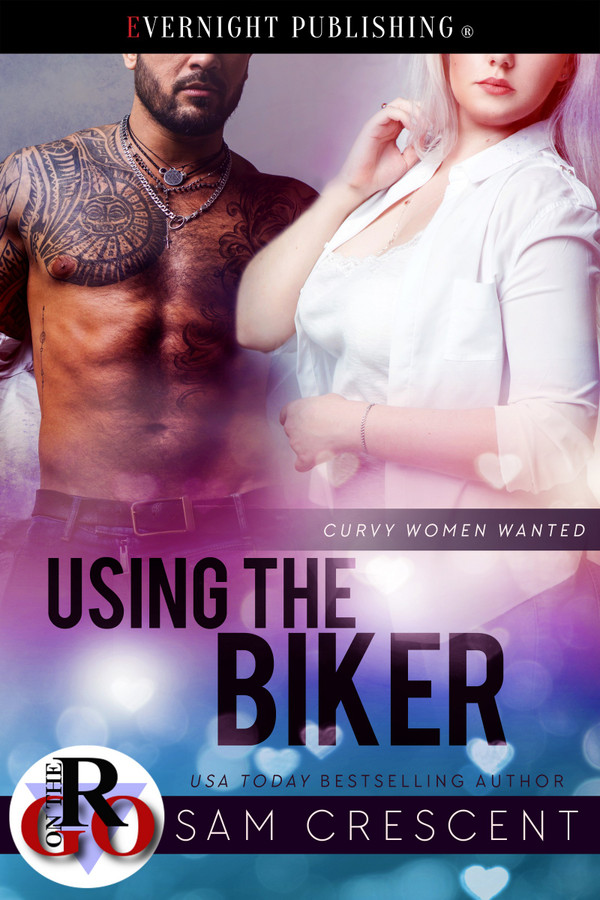 After finally getting a divorce from her cheating ex, Jo is not ready to start a relationship, so when her best friend introduces her to the president of the MC club in town, she’s not interested in anything serious. But there’s no denying the attraction she feels toward him.

Doc uses women. He has no reason to have them in his life other than to fuck them. The moment he sees Jo, he wants her, and what’s more, he knows she wants him.

There’s no one stopping them from having a bit of fun, pure fucking, nothing complicated. But Doc’s not used to enjoying a woman’s company. Jo doesn’t take any shit, and before long, he wants to keep her all to himself.

For Jo, she’s terrified. She’s pregnant with the biker’s baby, but how can she tell him? This was about using each other, not about commitment. Is there any chance they can find love and not just for the sake of the baby?

Sipping at her beer, she had no idea where to look. This was all new to her.

“I’m curious, how many men have you fucked?” Doc asked.

Returning her attention to him, she pressed her lips together, feeling put on the spot.

“Erm, I don’t think that’s really any of your business.”

“You look like a virgin, waiting to be taken and ravished.”

Her cheeks had to be red. Her face was flaming hot.

“Guys weren’t exactly pushing down my door. What about you?”

He moved toward her, and even as she didn’t want to, she took a step back.

“You don’t even have an estimate?”

“A real man doesn’t kiss and tell.” He reached out, tilting her head back, and she stared into his eyes. He had the prettiest eyes, and from what she’d seen of his lips, she wanted them on her body, as well as his hands.

She wanted his kiss more than anything else.

“You’re quite easy to read.”

Jo didn’t get a chance to respond as he slammed his lips down on hers, silencing any question or protest from her. With her hands clenched into fists at her sides, she didn’t know what to do or to say.

Show him you’re an actual human being with feelings and emotions.

She touched his arms, feeling the strength even through the leather of his jacket.

The hand that had rested beneath her chin moved, sinking into her hair. He grabbed the back of her head tightly, almost too much for her to handle. Her nipples went hard as pebbles.

Doc bit down on her lip, sucking it into his mouth before breaking from the kiss.

“This doesn’t mean anything. You can fuck without regrets. No one is at home waiting for you. I won’t judge you.”

She closed her eyes, wanting it so badly. Her pussy was soaking wet, and she’d give anything to just let go.

No one is waiting for you at home.

Stop being this woman that no one wants.

She was tired of curling up on the sofa each night, a tub of ice cream, and no one to share it with.

Sliding her hands beneath his jacket, she pushed it off his shoulders, breaking from the kiss to relish the sight as the jacket fell to the floor. She gripped his shirt, pulling it over his head and marveling at exactly how sexy he looked. His shoulders were thick and full of muscle, all covered in ink. Running her hands down his chest, she moaned as he pulled her close. He went to her shirt first, tugging it over her head.

She helped him get it off before dealing with her bra herself.

His groan mingled with hers as he cupped her tits. He pressed them together, leaning forward to slide his tongue across each peak.

Meet Josephine Lovell, a woman in her 30’s who has just went through a nasty divorce. To help her get over the loss and help finding a man for some quick fun, her best friend Mandy dragged her to the local Motorcycle Club. What Jo doesn’t expect is to be introduced to the President of the Nowhere Men Motorcycle Club, Doc. Jo hasn’t had an interesting love life and she is an adventurous woman. She strikes a deal with Doc; they will have sex with each other but there will be no commitment. If they get bored or find someone new, they can move on with no bad feelings. This suits Doc just fine; he enjoys her body and attitude but has always had decided to never get married. This is a short story but fun to read. Watching two such characters figure out how much they end up loving each other was interesting. My favorite character was Mandy, we all need a friend like her. She does everything she could to get them together as she knew they would be a good fit and had hated Jo’s ex-husband. If you enjoy tough and sexy men who ride motorcycles that can also make a woman scream in pleasure, you’ll love this book.

I love this author so i loved this book .The only complaint is it felt hurried no drama no twists and turns too predictable .

Hot steamy insta love! Love the curvy women wanted books. Doc and Jo had that instant heat and attraction from their first look at each other.

First of all I Love Sam Crescent !!! Second MC instant attraction....my favorite!!! Doc and Jo were so hot together!!! The only problem.....it was too short.

This was a short story, but man packed with all kinds of hotness. Doc the president of Nowhere MC and Jo started out as just casual lovers , but once this biker got his hands on Jo there no turning back!!! This really is a fantastic story, I really liked it

Another great read by the author. This short story takes you on a wild ride of romance, a second chance at love for a young independent woman, and a first chance at love for the biker man. I thoroughly enjoyed the characters and their story, I can&#039;t wait to read more from this author.

This was good. I enjoyed it. It was well written and had decent pacing and the characters were likable. Not a lot of character development since it is a really short story. No real drama whatsoever. Doc sees Jo and thinks yeah she’s hot. Jo thinks Doc will be a fun distraction. But both grow to want more. No real description of previous affairs thank goodness. But Doc was certainly a manho, it’s even in the blurb. Don’t know how long he had been without other women, but it seems like it had been a while perhaps and he definitely wasn’t looking for anyone else after meeting Jo. So it’s all good. Mandy, Jo’s BFF

I enjoyed this quick read. Doc and Jo were likeable characters. They clicked instantly. There was no struggle and no dramas, just relaxed read.

A quick read that was packed with emotions and lots of sexiness! I loved how Jo just went on with her life after a cheating husband. Her friend Mandy was a hoot. Doc, what can I say about him. Their relationship started out as just one night but turned into so much more. It was fun to read about their journey to their HEA.

Sam Crescent has done it again. This book is a great read if you like Mc reads. It has a good story line.

First of all I Love Sam Crescent !!! Second MC instant attraction....my favorite!!! Doc and Jo were so hot together!!! The only problem.....it was too short.

Another great read by the author. This short story takes you on a wild ride of romance, a second chance at love for a young independent woman, and a first chance at love for the biker man. I thoroughly enjoyed the characters and their story, I can&#039;t wait to read more from this author.

Hot steamy insta love! Love the curvy women wanted books. Doc and Jo had that instant heat and attraction from their first look at each other.