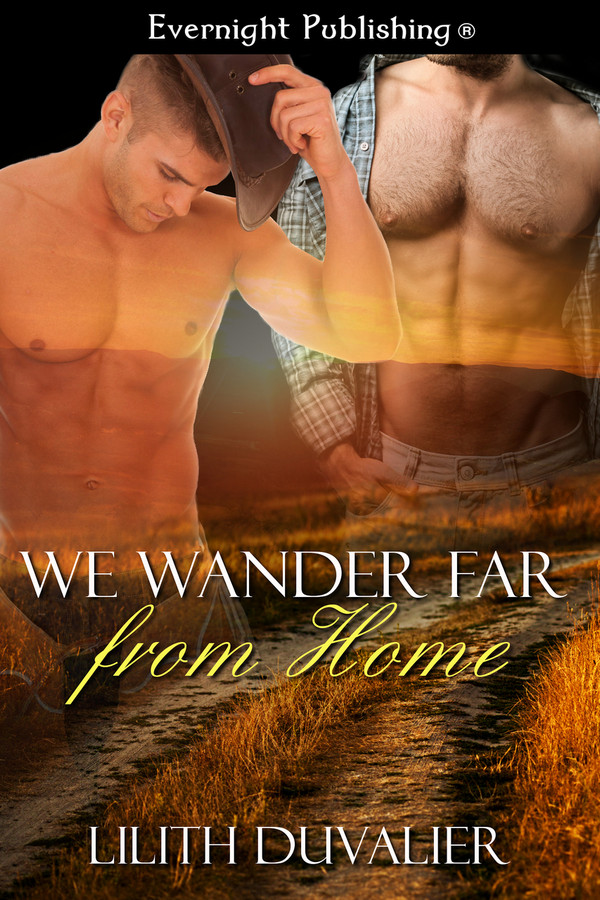 A crack shot best gal, a former criminal lover, a sudden ejection from everything he's ever known, and the faintest taste of freedom. That's what drives Will Kearny out of the comfort of a normal life and out into the Nebraska wilderness. Soon the sweet, quiet cattle rancher from Minnesota is robbing stagecoaches, knocking over banks, and running off into the mountains to celebrate in Henry Fitzpatrick's arms. But winter's coming on, the stagecoach routes are drying up, and the law is onto them. Life on the edge is the only way Will and Henry can be together, but life on the edge is short. Can forbidden love survive in a harsh world?

He shifted closer to Henry’s body under the covers and realized that they were both naked. Had he really been so exhausted last night that he didn’t remember undressing? Or possibly being undressed? He set a hand to Henry’s chest, tracing a line down to Henry’s flat, red nipple. The contrasts of Henry were astonishing. The hills and valleys of his chest and shoulders, the gentle touches of his rough hands. Will ran his hands down Henry’s broad shoulders and slipped his fingers into those calloused palms.

And this man was a criminal.

And between him and Annie, they had made Will one too.

Memories sparked from last night. Henry’s hand wrapped around Will’s, tugging him patiently into this room. Henry’s stubbled chin pressed to his face in an affectionate good night kiss that Will had barely been conscious enough to return.

So. Sweet. Affectionate. Beautiful. His.

Well, Will supposed, you couldn’t have everything. He pressed his body against Henry’s, closing the small, cautious gap between them, and kissed the other man. He slid his hands out of Henry’s and wrapped his arms around Henry’s back, running his fingers over the ridges of muscle there.

Henry began to kiss him back slowly, as though not quite woken from a dream, before his loose grip tightened and his hands began to wander up Will’s body.

“Afternoon, actually, I think,” Will replied.

“Mhm,” Henry responded disinterestedly as he resumed the kiss, sliding his tongue past Will’s lips like walking through an open door. He took control of the kiss. Eased his body on top of Will’s. Will sighed happily as he sunk down into the feather mattress under Henry’s solid weight. Despite Annie’s assurances that there were other men like him, Will hadn’t really let himself believe it until the night Henry kissed him in the barn, only weeks ago.

Henry, here, warm and willing, was more of a salve than Will would have imagined. Henry’s touch made the sting of moving away from his family lessen. It muted the horror of the smell of the barn and all its inhabitants burning. And it almost made the crime they’d committed feel a little like an adventure. The sexy little show Henry put on for the audience. The charming move of leaving the women their jewelry.

The way that Henry’s skin moved over Will’s, the heavy scent of him dominating Will’s senses, made it easier for Will to concentrate on his rewards rather than his sins.

Will rolled his hips up against Henry’s, sighing at the feeling of Henry’s firming cock against his groin. A small noise of disappointment escaped him as Henry broke the kiss.

“Shhh,” Henry said. He settled himself back on his haunches, straddling Will’s legs. His half-hard cock hung between his thighs. The tip rested where the hard ridge of Will’s hipbone sunk into the crease between hip and thigh.

Will reached up to take Henry’s arm in his hand.

Henry pulled away, caught Will’s hand and pushed it back down to the mattress. “Shhhh…lie back.”

Will watched as Henry’s hands ran over his chest. Down his stomach, palms flat and warm. He traced his fingers down into the grooves between Will’s hips and his groin, where the skin was soft and sensitive, unaccustomed to being touched.

Will pushed his hips up against Henry’s hands, asking for more. He’d been ready back in the cabin a few nights ago, he didn’t need all this careful touching.

Henry’s slid back up his chest, rubbing and pinching his nipples.

Will felt his breathing getting heavier. His hips worked up against empty air. He looked down between Henry’s legs and swallowed. Henry’s cock was standing between his legs now, thick and flush and full.

And out of reach.

“Look at you,” Henry murmured, rolling the bud of Will’s nipple between his thumb and forefinger, every touch making the nerves more sensitive.

The sluggish warmth in Will’s belly started to coil, not urgent yet, but threatening to become so. “Henry, please.”

Henry grinned, and patted Will’s chest as though he was going to stop teasing. Then he dropped his mouth down to Will’s chest and took a reddened nipple into his mouth.

The coil of warmth in Will’s stomach tightened suddenly, the steady hum of arousal in his body spiked. He dug his fingers into Henry’s shoulders and bucked his hips up against nothing when the grip made Henry suck harder.

Will reached for his cock while Henry rolled the bud between his teeth and flicked his tongue over it. Henry caught Will’s hand and brought it back up to his shoulders.

“Henry, I don’t wanna wait no more,” Will moaned as Henry let his nipple go with a loud, wet “pop.”

“Yeah,” Henry said. His voice was heavy and rough and his eyes were dark with lust. His gaze ran over Will’s body like another caress and Will shivered. “I won’t make you.”

Henry moved off his thighs, arranging himself so that he was kneeling between Will’s legs. He slipped his hands underneath Will’s knees, calloused hands tickling at the sensitive skin underneath the joint. Will felt too exposed as Henry lifted his feet up off the mattress and spread his legs wider, so wide that his toes poked over either side of the mattress.

Henry arched down, kissing Will softly. Will set his hands back to Henry’s shoulders, letting himself stay open under Henry’s increasingly insistent tongue, kissing back with everything he could muster while Henry turned the kiss dirty and breathtaking. He finally settled his body down against Will’s, pressing his rock hard cock into Will’s body, rubbing against him until Will moaned against his lips.

“No more interruptions. Door’s locked. Hell, I even jammed a chair under the handle.” He dropped his face to Will’s neck, sucking at a tendon, then worrying his teeth against it. “Even if the goddamn law comes knocking, even if they break down the door, I’m gonna make you come before they cart us away.”

Will is a gay man in the old west, who marries his best friend to get her from her abusive father. Then he meets Henry and his thoughts about men become all too consuming. I can’t even begin to say how much I loved this book. Not like. Not ever really liked. LOVED! There was just so much going on for this book. The pace was beautiful. We meet Will, get to know him and Annie. Then he meets Henry. Their love is like a soft whisper just before a loud train comes through. Gorgeous, stunning, lovely. Okay, I’m rambling. Sorry, but wow, this book blew me away. And the sex! I was sweating and it wasn&#039;t from the temperature. Those scene were scorching hot. Damn! If you like gay romance, READ THIS BOOK. Even if you don’t normally read westerns because I usually don’t . Do not let the genre through you off. Ms. Duvalier has a new fan! We Wander Far From Home is gay romance at its finest!

I can’t even begin to say how much I loved this book. Not like. Not ever really liked. LOVED! There was just so much going on for this book. The pace was beautiful. We meet Will, get to know him and Annie. Then he meets Henry. Their love is like a soft whisper just before a loud train comes through. Gorgeous, stunning, lovely. Okay, I’m rambling. Sorry, but wow, this book blew me away. And the sex! I was sweating and it wasn&#039;t from the temperature. Those scene were scorching hot. Damn! If you like gay romance, READ THIS BOOK. Even if you don’t normally read westerns because I usually don’t . Do not let the genre through you off. Ms. Duvalier has a new fan!