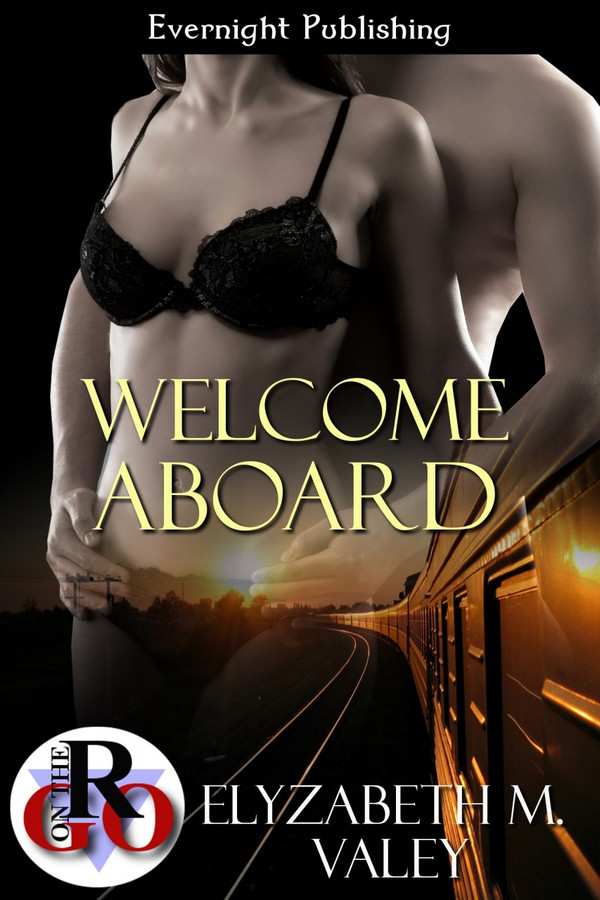 Julie is on vacation! After months of breaking her back at the office she’s ready for a weekend of absolute relaxation: a little reading, good food and some lazing at the beach are her idea of a perfect plan. However, when a handsome man with a sexy smile and naughty accent takes the seat next to hers on the train she’ll enter a wicked ride of passion and delight that will blow her mind and body away.

Excerpt:
“We’re on a train,” she hissed, gesticulating wildly.
William laughed, the lines on his forehead vanishing.
“I noticed.” He lifted the armrest and placed his hand on her thigh again. Julie bit back an unwanted moan.  “What you failed to have seen, my sweet, is that we’re the only ones in this particular wagon.” He smiled smugly, drumming her thighs in a rhythm that almost had her lifting her hips.
Julie huffed. Yes, her body was weak with desire but she wouldn’t back down so easily.
“It’s a public space.”
“And doesn’t that excite you?” William asked, grasping her flesh, his fingers digging into her skin pleasurably.
Julie’s thoughts scattered. This was crazy. Out right crazy. She wasn’t a one-night-stand kind of girl. Sex in public had been out of the question, and yet—
She observed William. He was impassive, waiting for her resolution while toying with her lust. She shook her head. They could get caught. There could be cameras on the train and it was illegal.
“It’s illegal!” she blurted as the tips of his exploring fingers brushed against her sex.
“So?”
Grasping a strand of her hair between thumb and forefinger, he caressed it before neatly placing it behind her ear, brushing his thumb over the shell.
“It’s only illegal if we get caught, my sweet. I have no intention of allowing that.”
“But--”
His brown eyes bore into hers, the desire swirling in them making her weak at the knees.“You want to, Julie. I know you do.”
“How?” She cried out the question as he finally pried his way underneath her jeans, resting his fingers above her soaking panties.
“For one, you’ve been squirming in that chair, a lot.” He smiled at her obvious discomfort. “Then,” he murmured, rubbing his finger over her swollen nether lips. “You’re dripping wet. If I wanted to, if you wanted to, I could probably slide this finger inside you without any restraint whatsoever. Maybe even two.”
This was so wrong. His scorching eyes begged her to accept the challenge. Julie bit down on her lip. She couldn’t say yes, not here.
“Tell me you want to, Julie.”
William’s finger found its way under the elastic of her thong. A moan became lodged in her throat as he touched her, learning the wet contours of her cunt with a single digit.
“I—“ She hesitated. Did she want to? Did she really want to do this crazy thing? The tip of his finger hovered over her entrance, daring her to accept.  “Say yes, Julie.” His gaze was heated, his breath as shallow as hers.
She wanted this. Damned be it all, she wanted William’s fingers deep inside her pussy. She wanted the dazzling pleasure, the relief to the unrelenting throbbing between her legs. The realization of what she was about to do spiked her desire and cut off her ability to speak. Opening her legs wider, she smiled shakily. William’s lips parted slightly, his gaze fierce as he pushed a finger inside her. Julie reclined against her seat. Her eyes fluttered shut and she whimpered as another thick digit joined the first. She responded to him. He was her master puppeteer and she was his puppet, rolling her hips with every thrust. “You want more?” he murmured, his lips hovering over hers.
Julie opened her eyes. William regarded her, his long lashes framing deep eyes that she couldn’t help thinking belonged to a poet at heart.
“Yes,” she whispered, closing the distance. Soft and compliant, she mewled her approval, as she tasted him. Her fear had vanished and left behind an ardor that required urgent appeasing. William grunted into her mouth as she teased his bottom lip, nipping at the full bow with relish. Tilting his head to the side, he swept his tongue over the seams of her mouth in a request for entrance. She granted it readily, taking in his tongue with a desperate hunger that rivaled his as they tangled.
He was relentless, his fingers toying with her sex even as he kissed her. In and out, the thick digits of his left hand pumped into her slowly. It was a delicious torture that only succeeded in making her hotter and more desperate for what was to come.

This was a fun, sexy story that I breezed through in one short sitting. We find Julie so excited to finally be able to take a short weekend vacation away after weeks of working a crazy schedule. She plans on enjoying some good food, reading a good book and just relaxing on the beach for a few hours. While she’s waiting for her train to arrive, she decides to pass the time people watching. One man in particular catches her eye, but as she’s taking in all the people around her she doesn’t realize that he’s gotten up. When she looks for him, she can’t find him again. I loved this air of mystery and wondered if the handsome guy was going to be on her train too. After she boards, she’s completely surprised to find Mr. Gorgeous as her cabin partner. At first, I thought it was crazy what Julie decided to do with this gentleman named “William.” I thought it was brazen of her to be this fearless and bold on a train, where anyone could see them. As I continued reading and I finished the story, everything was explained and it all made sense to me. If you’re in the market for a short, hot read to fit into your busy schedule, you might want to consider picking this one up. All Julie wants to do on this short weekend vacation is eat, relax and be lazy. She’s worked very hard for weeks and feels she’s overdue for a bit of hard earned fun. When she boards her train, she’s surprised and excited to find that the very man she was admiring back in the train station is her cabin neighbor. After their introductions, things heat up very quickly between them and this becomes the most exciting train ride that either of them ever planned on. Who is the mystery man named “William?” Do they hook up together when they both reach their destination?