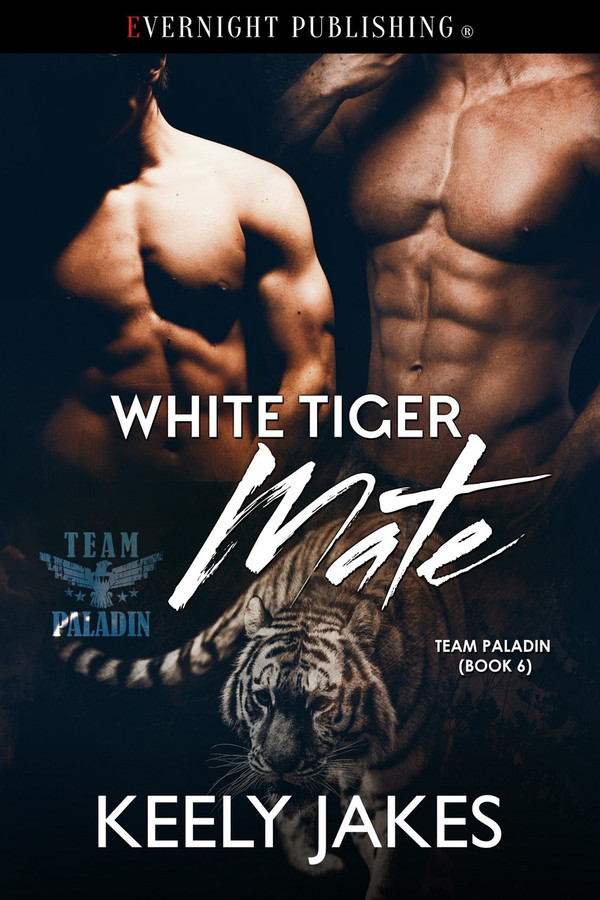 Two years ago, General Micah Andrews denied the mating pull he felt for Zach Tyler and walked away. Since then, Micah has been doing his job, but his heart has not been in it. When told he could be dead in six months, he knows it’s time to leave the military and find the man who has never been far from his thoughts.

Zach Tyler spent two long, lonely years wandering the team lands in his white tiger form. But when Micah shows up in Paladin, Zach returns to his human form to focus on healing his sick mate in the hopes he will not walk away again.

Can Zach forgive his gun-shy mate for denying their mating for so long? Can Micah learn to relax? Will the men be able to put the past to rest in order to look ahead to their future together? Or will the white tiger lose his mate in the end?

Shivers shot down Micah’s spine in response to that deep voice.

He could not help but do as the man behind him requested. That voice pulled at him and made him want to record it so he could listen to later. Stepping to the edge of the sidewalk, so he was out of the flow of traffic leaving the Navy’s medical center, Micah waited patiently for the man to catch up. He approached at a slow limp while leaning heavily on a cane. His left leg was in a heavy looking walking cast. When he was two feet away, he stopped.

“Sergeant Tyler, isn’t it?” Micah asked, though he already knew who the man was.

“Yes, Sir. Zach Tyler.” The man stood at attention though Micah could tell he it was uncomfortable for him standing on his casted leg.

“What can I do for you, Sergeant Tyler?”

Micah froze when the man took one more step forward. He then leaned in until his nose was only an inch from the side of Micah’s neck. He pulled in a deep breath then breathed, “Mine.”

Micah stepped back, not sure exactly what was going on, but pretty damn sure it would not be good for his military career, no matter how close to retiring he might be. Though “Don’t Ask, Don’t Tell” had been lifted regarding gays in the military, there was still a stigma about same-sex love amongst higher ranks. Which was why he had been married, and divorced, twice in the past twenty years. No one knew he preferred men over women, and he planned to keep it that way, at least until he had taken off his uniform and was far from the political machine that was upper echelon military service.

Sergeant Tyler leaned in and took another deep breath before straightening again. “You’re my mate,” he whispered, glancing around to make sure their conversation was not overheard.

Micah looked the man up and down, unable to look away from the man’s eyes. The shape and slant told of an Asian heritage, though their neon blue coloring was unforgettable and not a color he had ever seen before. The man was an inch or so shorter than his own six feet, and though hospitalized, the man looked to be in perfect physical condition otherwise.

Micah felt pulled toward this man like he had never experienced before. His cock filled, causing pain as it was trapped in an awkward position. He shifted his weight, trying to relieve the pressure of his shorts. He had an insane urge to say to hell with the rest of his day’s schedule just so he could go somewhere private with this man and explore whatever might be between them.

“Ready to go, General?” His driver broke the spell wrapped around the two men, and Micah blinked.

“You’re mistaken, we can’t be mates.” He spoke brusquely before he turned and marched to the sidewalk where his car waited.

Climbing into the back seat, he forced himself to pick up his cellphone. He stared at it, not comprehending the message his assistant had sent regarding the upcoming state dinner. He did not look up until they had left the rehabilitation center’s parking lot, and the man who reached through the armor he had placed around his heart to keep it safe.

Pulling up the message app on his phone, he sent his assistant a request for Sergeant Zachary Tyler’s service record to be on his desk when he arrived back to his office. He needed more information on this shifter who claimed they were destined to be together.

Book Review Much to my surprise ‘Cajun Thunder’ wasn’t the end of this series although it has been a while between releases. Regardless, I was looking forward to catching up with the Marines, their mates, and a baby girl in Paladin, Montana. Not to mention I was ecstatic that the author wrote a story involving General Micah Andrews the man responsible for this Special Forces team’s medical discharges from the military – the man who has helped them more than once. “Micah only hoped Sergeant Zachary Tyler would not reject him because it had taken him so long to get his head out of his ass and admit that he needed what the shapeshifter had offered him on the sidewalk outside the rehabilitation center. He needed the home and connection to another human being that being Zach’s mate promised.” It was no surprise to me that Micah was suffering from migraine headaches, high blood pressure, high cholesterol, and all the other health problems that accompany a high stress job at the Pentagon. What was surprising was his willingness to finally listen to his body (and his doctor), complete and submit his retirement papers, and begin his leave immediately with the first order of business being heading straight to Paladin, Montana and his mate. Poor Zach. Ever since Micah rejected him he has lived in the woods on the property the team bought, existing as his white tiger and hoping that Micah would come back to him. When Micah does return, Zach isn’t even sure if it’s for their mating or not, and I hated that he had been made to feel so insecure these past years. Things are a little rocky in the beginning and both men have to learn to communicate and compromise. This was a good addition to the series and a wonderful happy ever after for an exhausted three star general and his white tiger mate. It was nice to see everyone again and know that life is working out well for the entire team and their mates.

Micah was a General and even though he was close enough to taste his retirement, he wasn’t quite finished when Sergeant Zach Tyler had insisted they were mates. “Don’t Ask Don’t Tell” might have been lifted, but Micah knew coming out would kill his career in certain circles. And so he had denied Zach and tried to go on with the final stages of his career. Two years later after some dire warnings from his doctor, Micah is ready to finally see if Zach’s predictions were truthful or not. Only will Zach be willing to take another chance on Micah after being burned the first time? I thoroughly enjoyed this fun short story. While I don’t think reading the previous installments of the Team Paladin series is strictly necessary quite a few of the secondary characters are from the previous stories and so I think I got a lot more from Zach and Micah’s interactions with them because I’d read the earlier stories. That said, I think I’d classify Zach and Micah’s romance story as being a stand-alone, but the world and wider range of characters really is part of the larger series as a whole. I enjoyed seeing the progress the township had made and it was like a quick catch-up with old friends seeing how the many other characters were progressing. Zach and Micah’s romance was fast-paced and very sexy. There’s a bit of conflict which I personally felt was a little clichéd – albeit very understandable. I enjoyed seeing Zach and Micah face and conquer their personal concerns and demons and find a way to settle together and start a loving and trusting relationship. The sex was hot and explicit and I feel readers who like a bit of spice in their erotic romance should find it very satisfying. A quick, hot read this is a great addition to a very good series.

A nice story but forgiveness was a little quick for two years of denial and pain.