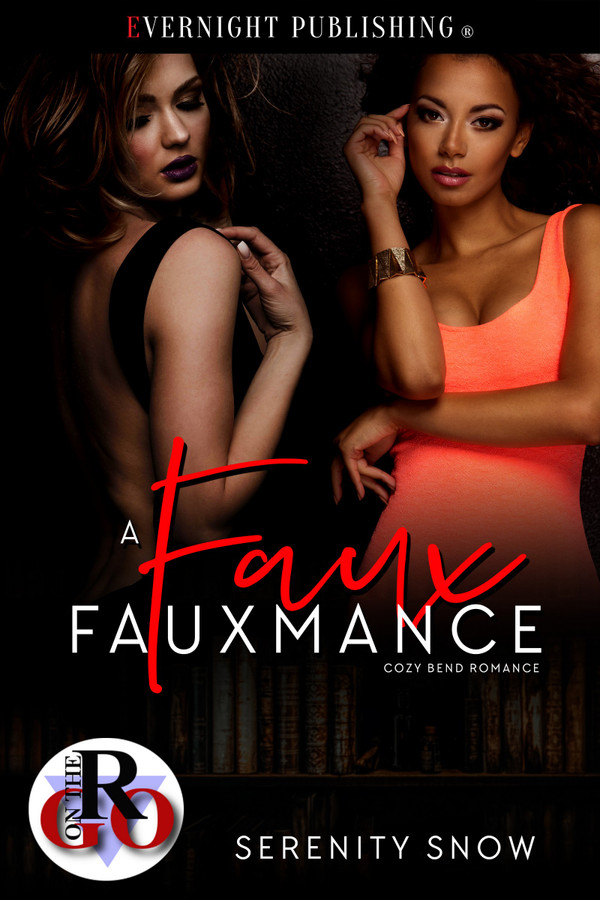 When Adra’s ex insists on Adra coming to her engagement party, Adra tries to refuse. But the hot shop owner Mori Baker offers to escort her—as Adra’s lover, to turn the tables on the vindictive ex. To make it look good, Mori convinces Adra that pretending to be a couple would make their claim to be lovers more believable.

Adra doesn’t want to play games, but Mori soon has people talking and Adra’s heart beating fast and her breath catching as she falls fast for the mysterious Mori.

Mori has had her eye on Adra for months, but she didn’t want to do anything to make life uncomfortable for Adra. However, now that the chance has presented itself, Mori’s all too willing to reach out and grab what she wants, even if that means pulling out all the stops to win Adra’s heart.

“Hey, Adra.” The cheerful tone had her slowly turning to look up.

Ciara stood there, wearing a grin, with an expensive weave job and expensive dress with a name-brand bag dangling from her arm. She was lovely as ever with her bright brown eyes and perfectly made up face and manicured hands.

The ring sparkled on her finger, confirming for Adra something she’d already heard. Ciara was engaged.

“It’s been a while,” Ciara said. “How’s it going?” Ciara took the chair Kate had vacated.

“Things are fine. What’s new with you?”

“I’m engaged,” she squealed. “But you probably already know that. I wanted to invite you to the engagement party.”

“You have to come,” Ciara insisted. “We’re having the party at my uncle’s in Clover.”

Ciara’s uncle had been a partner in a big law firm until he opened his own in Clover. Now, he was still famous because he took cases mostly out of town for the big-money-white-collar criminals.

He’d thrown some money Ciara’s family’s way, and Ciara had suddenly become too good for her.

“You can bring a date,” she said, a mocking look in her eyes.

Ciara was just screwing with Adra, and she knew it. She wanted to make her feel like shit because she was alone while Ciara had someone.

“Nonsense,” Ciara exclaimed. “I want you to meet Tucker. He’s so hot and sexy. He’s a lawyer like my uncle.”

“Honey, I’m sorry I’m late.” The warm voice was followed by a hand on her back and warmth at her side. The soft hint of perfume drifted over her, and Adra turned to look up in time for soft lips to land on hers.

The heat engulfed her, making her pulse race and her head spin. Every nerve ending in her body fired to life as if from a long, dormant sleep.

Mariah Baker’s lips lingered on hers as her fingers came up to caress Adra’s cheek, and their eyes met. Mariah’s blue ones were the color of the sky as they poured into hers. Adra’s breath lodged in her throat, and her nipples peaked.

Mariah, the owner of the chic shop Adra couldn’t really afford to shop in, straightened to fill her vision. Her short, dark brown hair was cut in a classic boy-cut. She was clad in slacks and a button-down, the top two buttons open, revealing a chain against honey skin.

“Who’s your friend?” Mariah asked and took the chair next to Adra.

The soft scent of her—it was always a hint of lavender and citrus—skimmed over Adra, relaxing her a little.

“Who are you?” Ciara demanded curiously. “You’re new in town.”

Mariah chuckled that dark throaty sound that always made her stomach flutter, and Adra saw true delight in her expression.

“I guess I am since most of you grew up together. I moved to Cozy Bend a few years ago. I own Southern Chic,” she said.

“You do? I bought a dress from there yesterday,” Ciara said. “You have some really nice stuff. The designer, MC, is fantastic.”

“I’ve heard that,” Mariah said with a patient smile as she draped her arm along Adra’s chair, and Adra shivered from the contact.

The high-end things Mariah, or Mori as everyone called her, sold in her shop were by a popular designer called “MC”. The label had taken the world by storm four years ago according to Kate, who could actually afford to buy something from Southern Chic on occasion.

“I heard she’s designed a few wedding dresses, and I’ve been trying to reach her. Do you know how I can do that? I heard she’s a little elusive and never takes pictures, so I have no idea what she looks like.”

“Not never,” Mariah, said with a shrug. “Just rarely.”

“But I would love for her to design my dress. The wedding is in eight months.”

“Oh, well, I’ll pass along the message,” Mori said. “So, you two are old friends?” Those blue eyes drifted to Adra, and she got lost in them.

“Something like that,” Ciara said with a shrug. “I was just inviting Adra to my engagement party.”

Adra tore her gaze from Mori, confusion snaking through her. “I was declining.” Adra shifted in her chair feeling a bit uncomfortable with Ciara’s gaze on her.

“Why?” Mariah stroked Adra’s nape with soft fingers that sent electricity ricocheting through her. “I’m free, and you were just saying the other day that we didn’t do enough as a couple.”

Adra’s eyes widened as she slowly turned to look at Mariah. The woman was confidence personified, and she was openly lesbian.

Mariah’s expression was completely unreadable, making Adra wonder what the woman was getting at with this.

“How perfect,” Ciara said. “Here’s the invitation. I look forward to seeing you two.” She gave Adra a last look and sashayed away.

“Mori,” Adra groaned. “I—why did you do that? I can’t go to her party. She’s my ex. Ciara just wants to make me feel like shit because she’s seeing some rising bigshot lawyer.”

Mori turned to face her, resting a hand on Adra’s thigh, and the touch nearly set her on fire.

“So, what better way than to show up with someone? Let her know you’ve moved on. She was nothing more than a stop on the way to true happiness.”